Replacement self adhesive plate (built by)

Hello, is it possible to buy a replacement self adhesive ‘built by’ plate? I don’t want to tempt the deities but I am happy now that Sophie is able to work according to my instructions. My intention was to engrave the plate rather than have one with my scribble on it. If I pay across the net, could one be posted to the UK?

Please check in w/ us on this at support@carbide3d.com

Thanks Will. I will send an e-mail message shortly.

…now that Sophie is able to work according to my instructions…

Sophie? Hmm, I never thought to name my Shapeoko, but I have sworn at it from time to time!

Any other ‘interesting’ names out there, I wonder?

I named my first machine “Watchmaker”.

Done. Leanne in Ecommerce is going to send me one by post. What is really surprising
(very welcome and much appreciated) is that it is going to be FOC despite my willingness to purchase another built by plate. That is definitely going the extra mile and makes me feel that my Carbide purchase was a great decision. My sincere thanks to all who work at Carbide3D and supply vital support to the user base. Very impressive customer service!

Yes, it was a contraction of SO3 (geddit?)

…definitely going the extra mile and makes me feel that my Carbide purchase was a great decision.

I’m pretty happy with the way Carbide3D have dealt with any one of problems I’ve had - so equally impressed with their customer service.

With these forums as well, what more would you need?

With these forums as well, what more would you need?

At least, but I’m kinda liking the 4 XXL!

I engraved mine with a diamond drag bit. Came out pretty good.

Nice work Josh. I don’t have a drag bit. I do have a few different engraving bits.

Fedex dropped the replacement built by plate off today. It now is sitting where the older and very much scruffier plate had once sat. Not having the drag knife capability, which was beautifully displayed by @SLCJedi on his built by plate (and made me think I need to buy a drag knife) I used a 30° V bit #45771-K produced by Amana.

The measured thickness of the self-adhesive plate was .7mm and I also noted the overall dimension of the segment for the identity of the builder. The legend, ‘BUILT BY:’ and the numerals ‘3500’ intruded a little into the space for the ID to be written. I selected a typeface from my eclectic collection. This one was a medium Avante Garde typeface produced by the old BitStream foundry, which now belongs to Monotype. I made it 10mm high in CC and noted that it would fit on the ID section of the build plate.

Machining on such a thin piece of readily pliable metal was my very first foray into metal machining (watch out @Vince.Fab

) and it made me consider workpiece holding and how deep to go with the cutter. I assumed that the revolving cutter would throw up a burr that could potentially be difficult to remove. I had thought about finishing the job using a fine Arkansas stone but I did not want to abrade the unengraved surface of the plate. I chose to engrave to the depth of just .250mm, figuring that it would keep the burr very small. I also thought that it would give me a little headroom if the engraving process showed the plate to be slightly out of true and not flat.

A couple of images to round out this short account: The first is the cutting of the plate which was held with painter’s tape and CA glue. My thinking was that the method would also help to keep the plate flat. I left the coating over the plate during the engraving process in an effort to avoid marks from random scratches caused by my handling. 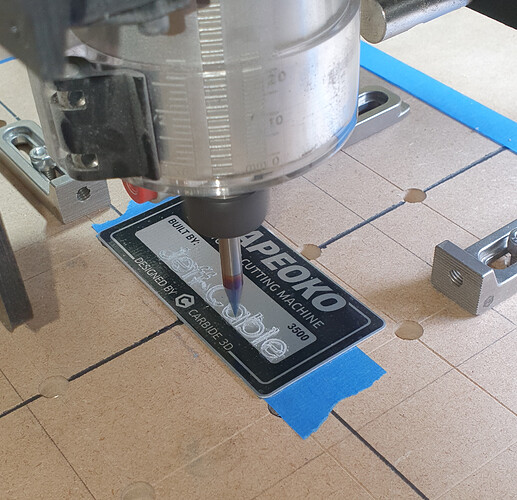 This next image shows the plate where it belongs, on Sophie. It looks better to my eye than the hastily scribbled text in permanent black marker. Thanks to Carbide 3D for facilitating me with the plate FOC. Thanks to Leanne for the rapid delivery. 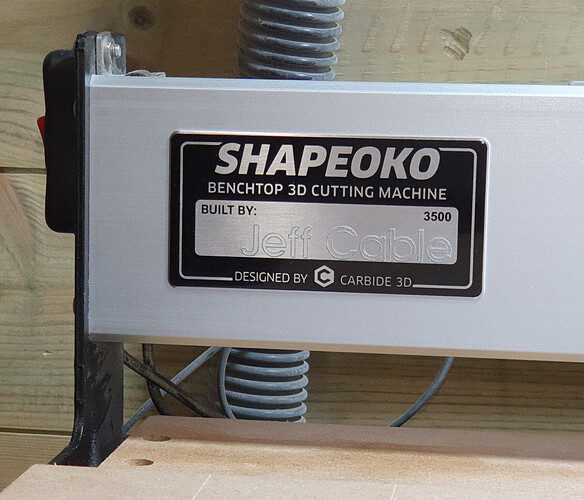 The but I used was a diamond tipped drag bit, not a drag knife. Fairly small terminology difference with larger functionality difference.

Yes, I realised that after posting.

I didn’t want to be partially responsible for accidental anarchy. I only like to participate in intentional anarchy.

I would like to be an anarchist but I have never been able to find where they hold their meetings.

I’m too casual for meetings.

Not even a ‘T’ shirt showing you are an anarchist?