Here is another one of the excellent projects by @45rpm. I glued and clamped some scraps of Ash together and then surfaced them and cut this 110mm diameter x 60mm high box from the scraps. It was then V carved and all it awaits is some sanding and finishing. 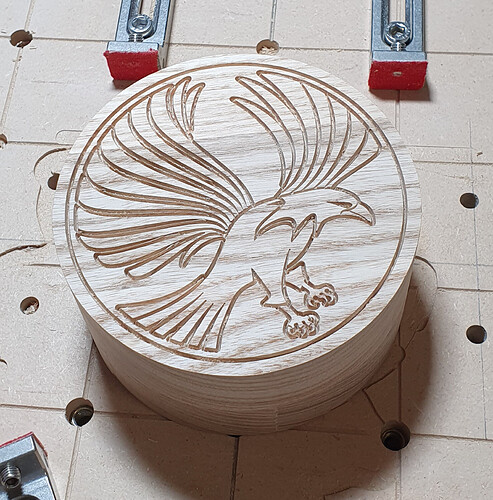 V carved lid using a 30° spectra coated Amana bit. Speed of the router was 18,000 rpm
and the feed speed was 1500mm per minute. The cut was made in 4 x .5mm passes to a depth of 2mm. in a lid that was cut to a 4mm thickness. Note: Some of the very thin central sections were damaged but overall, the picture carved quite well. 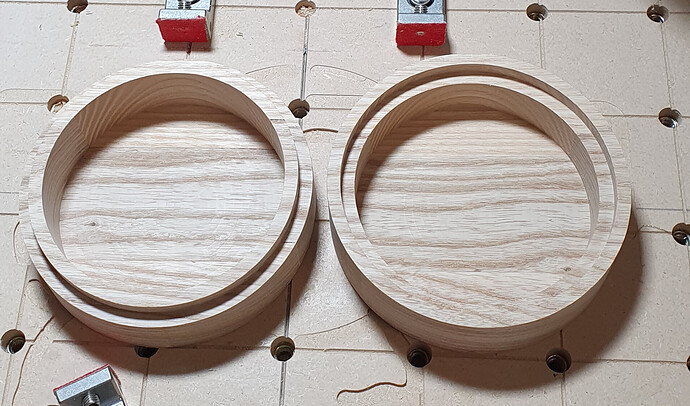 This is the edge on view showing the great fit and a mistake. I had omitted the finishing cut 0.1 on the lower section, as determined by the horizontal milling lines. The tab site on the right of the picture at the base needs to be finished and the glue was not quite thick enough. 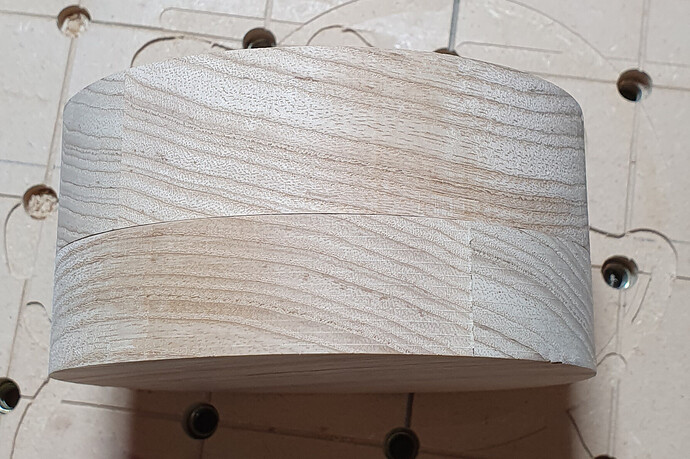 The next image shows the base being cut. Speed was 18,000 rpm and feed was 1500mm per minute with a stepdown of 2mm. The cutter was a 1/4" carbide cutter with a 30° helix and four flutes. The length of cut is one inch. 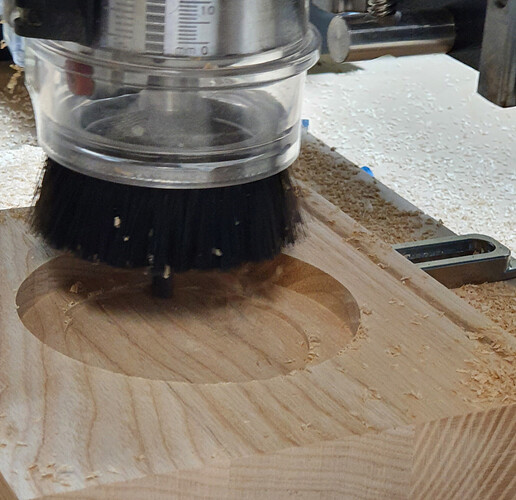 This image shows the chip size produced by the1/4" Niagara cutter was making.

This image shows the beginning of the V carve process. Because the workpiece was already held and centred to make the release cut, I opted to just flip the stock and move it towards an index mark, drawn on the baseboard, so that the carved image would be central on the lid.

The tabs were placed equidistant (one in each quadrant of a circle) and the were 5mm in width and 3mm in depth. This was sufficient support of the workpiece to allow the machine V carving of the lid. 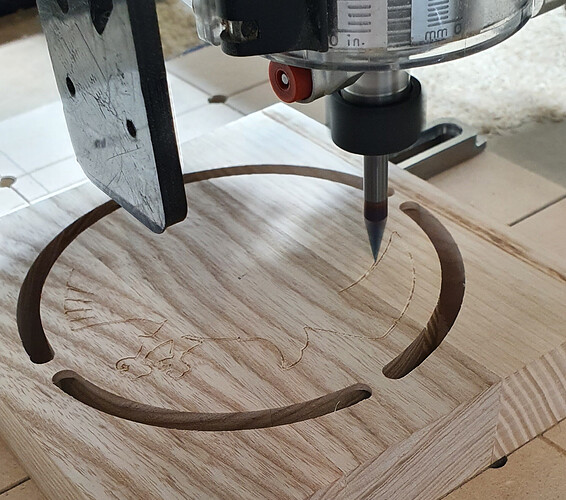 Other dimensions were the walls and lip features were 5mm in thickness. Each half was 30mm in depth (the maximum LOC of my 1/4" cutter). The main pocket was 26mm in depth, to permit a 4mm base and lid thickness. The finish will be sanding up to 3000 grit and then a walnut oil and beeswax coating.

John Clark has made some great box making videos. I subscribe to his youtube channel. For a while he was not making many videos but says he will start producing videos again. I think I saw him post that he has upgraded from a SO3 Standard to a Pro. So maybe that will prompt him with a new toy to break in.

I really like your eagle. Where did you find it? One of John Clark’s videos has a dragon on a box top that I have searched and searched for the elusive dragon. I really like it.

I found the eagle on Public Domain Vectors… there you go.

I usually search for free vector images on places like Pixabay, Vecteezy and Free SVG and if I do not find what I want… I change my search pattern to precisely what I want to find in .png files. These are then converted in Super Vectoriser, which I own a copy of, and that usually does a great job with lots of subtle options for the final output. It does occasionally leave open vectors which one can node edit but if the image is complex, it is usually much easier to find a better image.

I know that Carveco has a single click repair (Vector Doctor) that also appears to work in a really slick manner but I have insufficient experience with it to comment usefully.

Are you planning on sanding the v-carved areas to clean up the fuzzies, how are you going to do that?

Good question, Brian. I had thought about sanding but in the end I settled for the easier soft brass brush. It was not too bad. I think the issue was due to bad planning. I had not tested the V carve and should possibly have gone a little deeper to eliminate the very thin centre of some areas. A 90° bit rather than a 60° bit may have been a better choice but I was left with the result of not planning.

The V carved image after the fuzzies were abraded by the soft brass brush. 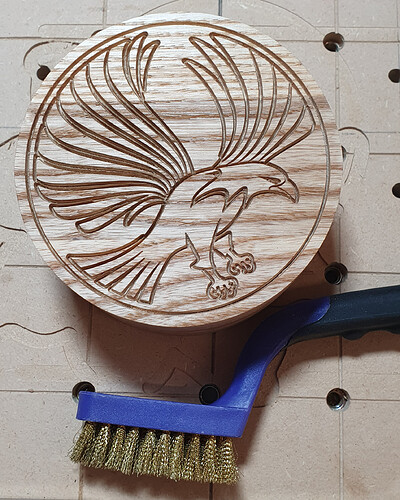 I’ll just add that running the vcarve job a second time will often help a lot in cleaning-up fuzzies/reducing the amount of sanding required. Of course this only works if the piece is still has not been removed from the wasteboard yet, and preferably without power cycling the machine between the two runs (to minimize repositioning errors)

That looks like it worked like gangbusters, and now I have another use for my brass brushes.

Just two minutes work was all it took.

What do you use to sand V carved indents, Julien?

Basically I don’t. I cheat, I avoid the problem altogether by using v-carve-friendly material (hint: bamboo) where the vcarve will come out perfect and no sanding is required.

And when I really, really have to salvage a piece I’ll use a super sharp Xacto knife and painstakingly cut/shave off the fuzzies.

Basically I don’t. I cheat, I avoid the problem altogether by using v-carve-friendly material (hint: bamboo) where the vcarve will come out perfect and no sanding is required.

The Ash was nice to carve but I had not paid sufficient attention to what the depth would need to be to get full width cutter engagement. With only 4mm thick material left after pocketing the lid, I did not want the carving bit to break through. I’ll have to look and see what bamboo stock is readily available.

And when I really, really have to salvage a piece I’ll use a super sharp Xacto knife and painstakingly cut/shave off the fuzzies.

That sounds like a mission. The soft brass brush can save you a whole heap of time and trouble.

The soft brass brush can save you a whole heap of time and trouble.

Here’s another way I have found of not having to care about the problem: doing inlays rather than “naked” vcarve jobs

Hmmm… gentle shove in the direction of inlays. I have avoided doing them because I was not up to speed with technique. Still, they are on the cards.

Incidentlally, I had a trivet disaster today. The trivet deities were angry that I was attempting to make a trivet without authority.

The remarkable likeness to the Inventables logo was sufficient for the same deities to mess up my workpiece and break my lovely expensive tool bit.

Incidentlally, I had a trivet disaster today. The trivet deities were angry that I was attempting to make a trivet without authority.

I just sent you some trivet-making mental vibes, the next try should be just fine

The remarkable likeness to the Inventables logo was sufficient for the same deities to mess up my workpiece and break my lovely expensive tool bit.

Remember: (pure) hexagons are the bestagons.

I just sent you some trivet-making mental vibes, the next try should be just fine

Oh great! Pity the authorities did not predict my trivet attempt.

Remember: (pure) hexagons are the bestagons.

I hear and obey master… 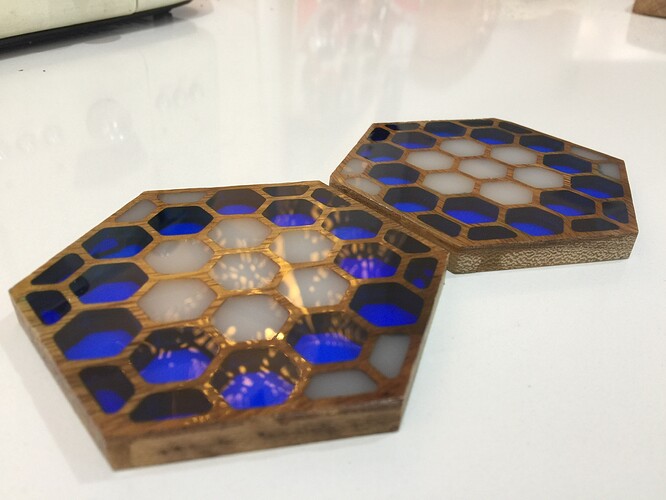 I made a trivet version of this idea, sans resin, from a bamboo chopping board. It did work nicely.

The trivet authorities must have been smiling on you that day, Andy.

I asked permission before venturing to try this, so that likely helped too

@jepho If your Vectric trial still runs, the bestagon trivet I made is as-per the attached VCarve file. Might be of inspirational help, or if nothing else a glimpse into how I created such a file.
Small Trivet 219x165 Rev-1.crv.zip (357.4 KB) 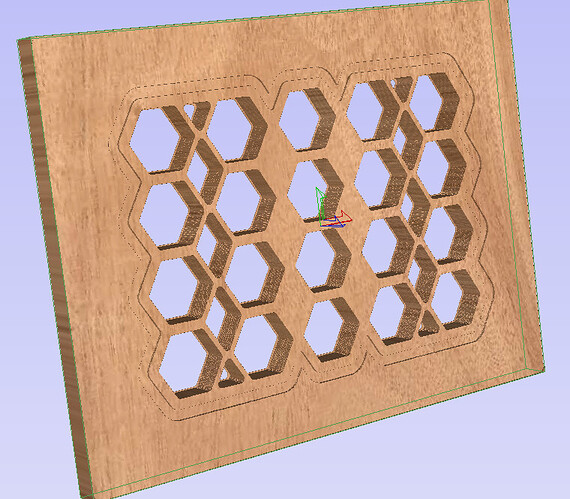 Thanks Andy. I don’t have the trial copy any more. Looking at the trivet design though, it does not look to complex. I could draw that easily in Affinity Designer. I will see what I can design based upon a bestagon.