SO3: DeWalt DW611 info. and Looking for the speed control pot specs

I want to remote mount the speed control pot for the router and I think I trashed the pot trying to desolder it. I tried measuring the resistance range from settings 1-6 but I get erratic readings. It looks like somewhere around 1 ohm max but I don’t trust that number at all. Does anyone know the resistance range for this potentiometer?

Some notes about the DW6111

It has what appears to be a hall sensor for speed control feedback. The upper end of the motor shaft has a disc that is right below the control card. If the control card isn’t over that disc then the motor will run max speed regardless of the speed setting. That means you have to remote mount a potentiometer and you can’t remote mount the entire control electronics. I assume this feedback means that this router ups the voltage if the router speed slows down. This is the reason I want to keep the OEM speed control. If I remote mount the pot I can put just make a label showing RPM settings and RPM’s should stay relatively close for most jobs. I don’t know how well the controller adjusts for heavy loads or how accurate it is. I’m pretty sure generic external router speed controls just PWM power which means you lose the closed loop speed control that you get with the OEM setup (not completely sure about that). So, I don’t want to use a generic router speed controller.

If you remove the top cover there are two small wires (red and black) that run down into the base of the router. Those wires are for the LED’s at the base. I tested the output of the card for those pins and it looks like its putting out 1.2 VAC but maybe it is some kind of PWM’d signal… I don’t know. The LED’s are pretty bright when run at 5-6 VDC. I will probably just run those wires to a DC power supply so I can turn them on and off from the front of my enclosure.

Hopefully that info helps someone. I think I’ll just try to find a pot in the 1 ohm range and see what happens. If you have any info or tips, feel free to pass them on.

You could install a SuperPID. I did and it works great. As an added bonus it allows the router to run as slow as 5000 RPM and it’s controlled by Grbl/G-Code.

We have a page on the wiki on this router: SO3: DeWalt DW611 info. and Looking for the speed control pot specs

Let me warn you in advance that I’ve already added a link back to this thread (so as to avoid circular references).

I suspect it would be harder to do better than the SuperPID which @twforeman mentioned.

The other alternative is a “real” spindle such as an Ugra or a Kress.

I don’t have any issues with the stock setup except that I want remote control of the power, speed and light. I’m pretty sure it does a pretty good job of speed control.

Thanks for the info. I might switch to a real spindle at some point but for now I’d be happy just knowing what pot to buy

I went ahead and just plotted it using resistors to test. Looks like a 5k pot will do the trick.

I’ll do some tests to see if the router controls rpm very well under load if I don’t run out of steam. 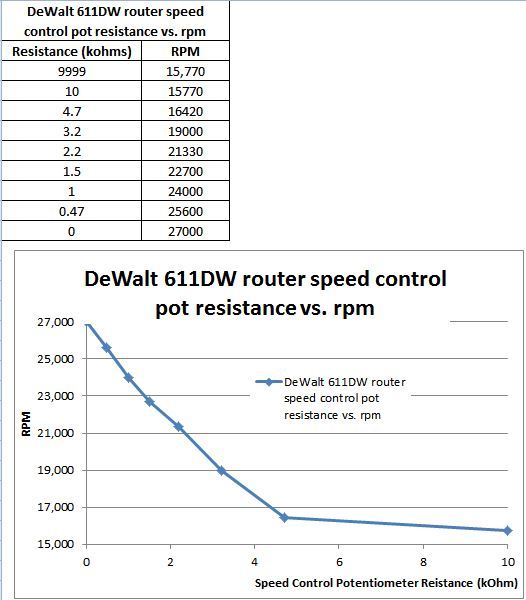 Use care, that’s probably line-level 110V power you are running through that pot.

These are my measured speeds for the dwp611:

hope that helps someone?

I tested the Dewalt under load and it does compensate to maintain RPM.

The pot is not connected to 120V. It’s in the mV range. No danger there.

I ran my power, LED light, and pot cables through the SO3 cable tracks for a very clean look and everything works great.

Next to make a small control panel for everything.

These are my measured speeds for the dwp611:

@WillAdams has reported elsewhere that there is variation from router to router in the “warp factor” to actual RPM mapping.

It’s easy to map using a cheap RPM meter. I plan to make a label for the potentiometer with actual RPM settings for my router.

Since the Dewalt regulates RPM under load with closed loop feedback there’s no more guessing.

Can you please post a reference? Each person will need to measure there to ensure their RPMs are known properly.

I just soldered wires into the circuit board where the pot was and ran those wires through the cable tracks and outside the enclosure where I’ll mount a control panel.

I don’t think I was that thorough — I’m pretty sure I noted that we had data on one router as reported by one user and left it at that.

I did add a link to the new numbers though.

Arguably, I should find time to pull all the DWP611 information out of the main page and put it into the product-specific page — maybe one of these days, when we re-write the entire wiki to take into account the release of the SO3.

Arguably, I should find time to pull all the DWP611 information out of the main page and put it into the product-specific page — maybe one of these days, when we re-write the entire wiki to take into account the release of the SO3.

Thanks for all your hard work on the Wiki page, Will! Every forum has a few key contributors. You are a big one for C3D and their customers. Thanks again.

Will[quote=“WillAdams, post:15, topic:1894”]
Arguably, I should find time to pull all the DWP611 information out of the main page and put it into the product-specific page — maybe one of these days, when we re-write the entire wiki to take into account the release of the SO3.
[/quote]

I’ll make a dedicated post for the DWP611 router remote speed and light control mods, Will. I think its easy enough that many people can do it without feeling too intimidated. I should have that up today or tomorrow.