SO3: XXL Mega-Enclosure and Dust Collection

I don’t know about sound reduction yet. I do have some padding/insulation materials sitting around the garage, so if it is an issue I could staple some sheets inside. As it is, the vacuum seems much louder than the router on the materials that I have cut so far, wood and MDF (hence the need for an enclosure).

The enclosure I built reduced the noise enough to were you can have a normal conversation with someone with out having to raise your voice.
Sorry I have yet to use a decibel meter to see the actual reduction. (Hopefully this weekend I will test it)
My biggest problem was the vacuum noise, it was alot louder than the Router so I made an enclosure for it with sound damping material. 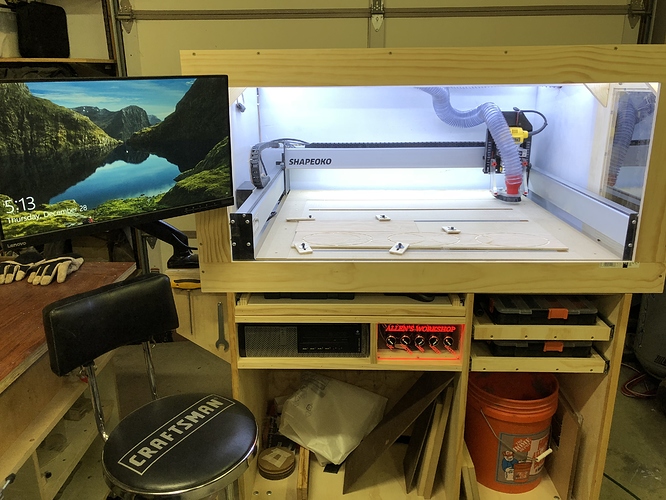 Thanks for the feedback on the sound. I built an enclosure out of 3/4" MDF and put foam inside to help but have only been able to use the CNC once so far. It was quiet enough that I didn’t have to put the front or top pieces on and I’d really like to be able to put an acrylic front on instead of encasing completely in MDF. My CNC is in my garage which is an attached condo so i have to be mindful of my neighbor. Hopefully it will warm up soon and I can make more cuts and see how I’m doing with sound.

Tony,
Nice set up. How is the remote keypad able to control the Z axis?

Would small web cam mounted inside the enclosure be an option? Maybe even WiFi? Then work could be monitored from somewhere else?

Found the answer! Wireless remote jog control for $18 - 1 minute install
Thanks for the post Tony.

Be careful about getting the seal too tight. You need to have a way for air that the vac system pulls to get back into the enclosure.

About gas springs… mine are 50 lbs each. Remember, they aren’t pushing the lid straight up so you need more force than the weight of the door. I wish I would have used 60 lb springs because when it gets cold mine aren’t strong enough to hold the door up without a prop. I had to use a very strong magnet to hold my door shut when its down though. You will have to play with various mounting geometries to get it optimized.

My biggest problem was the vacuum noise, it was alot louder than the Router so I made an enclosure for it with sound damping material.

Add a router speed controller to you vac so you can run it at lower power. Mine can do a good job with the vac turned down to around 60% power which is much quieter than full power. It will make your vac last longer too.

I would like the 10mm ball ends. Where to buy them?

McMaster-Carr is the complete source for everything in your plant. 98% of the products ordered ship from stock and deliver same or next day.

Hmmm… a router speed controller? Are those also called “PWM”?

Thanks for the link and info on the gas springs too.

I have an old cell phone and found a free app that will let me use it as a webcam, works pretty well. I’d still like to have a clear front if it is quiet enough. Half of the fun of a CNC is watching it work!

I too built an enclosure out of MDF for my shopvac. Inside the box is a stand it sits on top of with a series of channels for the air to leave the box, it breaks up the exhaust. Even with the shopvac at full speed I can hardly hear it but when turned down with the router speed control I can barely hear it with my head a foot away. This is the speed control I bought: https://goo.gl/RKqC5R

Actually, I mainly made my enclosure out of good plywood. It is the fine dust from CNCing MDF that is unhealthy to breath, which is why I built the enclosure.

a router speed controller? Are those also called “PWM”?

They do use PWM to control power.

About MDF dust… make sure you use a dust shoe and vac to collect the dust or the dust concentrations inside your enclosure will get too high and wear out the mechanicals.

I use the Suckit! dust boot already.
I was considering adding a second flex hose for the router (create modified top to replace what is on the router now) that would bring fresh air to it, it’s a Makita,from outside the enclosure. But it seems like it’s overkill according to other folks on this forum. I just have to remove part of the dust boot for deep cuts,

You -do not- want a cheap “router speed controller” - they look like dimmers (run <$35 or so - and are seriously overpriced). #1 they won’t work with the dewalt (which has an internal speed controller), and #2, I have yet to see one that is UL listed…they’re pretty sketchy. SuperPID - Expensive, requires mods to the router, I hear it works really well, and can be hooked up directly to the GRBL controller for PWM speed control via commands.

Stay away from this general type: 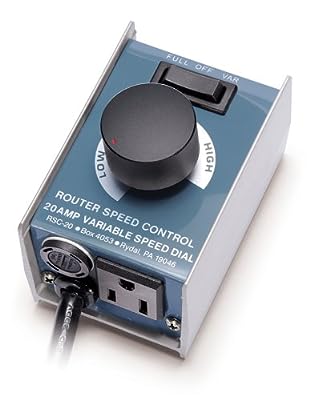 Features include: Adjustable speed from 0 RPM to full speed, 3 position rocker switch-Variable / Off / Full Speed, Full power and torque at all speeds, Sturdy Aluminum Case. Go back and forth from any ... 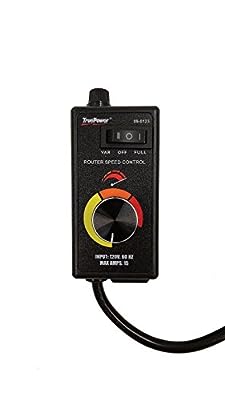 The TruePower Speed Controller is an electronic circuit with the sole purpose to vary an electric motor's speed, just like those in your duct and Inline fans. This router speed controller works with a ...

I think that one of those might work with my vacuum, to lower the noise and control the amount of suction. I wouldn’t use it for controlling the router. That is a job for a SuperPID.

Another option is to buy a dust extractor which has one built in, such as Festool, Fein, or Bosch. They also offer HEPA filtration and are designed to operate for longer durations.

Using a laser particle counter Ive tested a Ridgid shop vac with a cyclone, a bag filter and their blue filter (next to best one sold for Ridgid vacs). The air coming out of the vacuum was cleaner than the ambient shop air. So, unless you are cutting seriously hazardous materials, save your money and don’t buy the overpriced vacs.

Im pretty sure they all use brushed motors so I would not expect the high priced vacs to last much longer than a Ridgid. Certainly not nearly as much longer compared to the price difference.

The Ridgid vac flows more air (unrestricted) than a Fein or Festool too.

Filters are much less expensive too but if you use a cyclone and a bag upstream you will never have to change the bag or the filter. I went tbrough a set of motor brushes on my Dewalt (around 600 hours of cutting) and my vac bag was still only about 1/4 full. The filter still looks new.