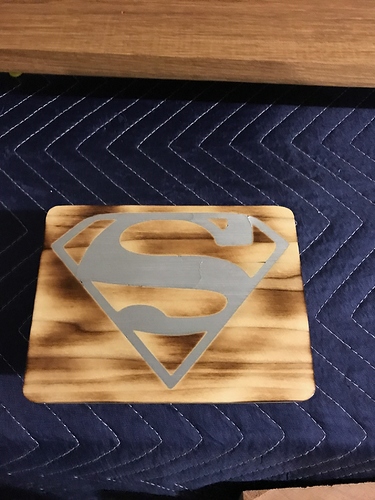 Followed this project I found on the inventables web site by a designer named Warren Downes. After pocketing the vector on my Nomad I filled it with solder and sanded it flush. Scotched the wood and after a few coats of spray lacquer this is what I made. Going to try this technique on another project soon. It worked better than expected.

Lead/Tin Solder? Be very careful about the lead.

Curious about your pocket pour/fill process… can you elaborate a bit?
Nice looking project BTW!

That looks really cool.
Even the lead free solders have tons of warnings. If it’s not lead it’s something else that’ll get ya!

That’s pretty cool looking. I bought some powdered dyes several months ago that I’d planned to mix with epoxy + micro balloons to do a similar fill, but of course I never got around to it;-/ Never thought of doing a molten metal fill

I think that’s interesting. I’ve been thinking about doing some fills but solder had never occurred to me. In theory, as you were filling the pockets, the wood was heating up and expanding. As it and the solder cooled (I’m sure at different rates), did a separation develop between the wood and and the edge of the solder? Is there sufficient adhesion to hold the solder to the pocket? Did you do any undercutting of the pocket to make sure it would stay in place? 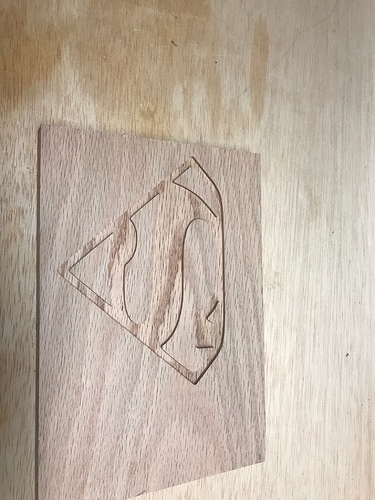 I started to make another so here is a picture of the cut. Which was cut with a 0.125 in square end mill. It is a basic pocket cut 0.125 in deep. I did not under cut it. I considered it but figured with decent parallel walls it probably only has one path of draw. As far as filling it I used a torch to melt the solder and over filled slightly and a solder iron to touch up any small voids. I feel it is pretty tight fit. As I was filling it with solder the wood bowed a significant amount but upon cooling flattened out nicely. The finished example from the original post was made with poplar this cut is in red oak both 0.5 inches thick. Feeds and speeds were set to the recommended nomad settings found on carbide3ds chart. One recommendation would be that once you get the solder flowing don’t stop until it is done the solder flowed a lot smoother over molten solder.

I am making another because after looking at the first one I decided I wanted one that was scortched more… thanks for the likes and feed back.

What doesn’t have a warning today? I sealed it with sand sealer and lacquer but in hind site after checking the labels that probably made it more dangerous. Haha

Thanks for the additional info @marcaine.
So I’m clear, you melted the solder directly into your pocket using a torch?

I held the torch about 4-6 inches above project with the flame angled slightly upward and melted solder and let it drip into pocket cut. I didn’t want to scorch my project to soon.

Don, To darken the wood with a torch, try darkening it as evenly as you can, a bit darker than your goal shade. Then sand it with 220 grit sandpaper working the burned sanding dust into the wood grain. An even warm brown shade will be the result. I developed this technique making barnwood furniture for several years, it will mimic old weather darkened wood pretty well. Practice on some scrap pieces of the wood you are darkening. I’ll try to post some pictures when I can. I love the idea of melting solder into the pocket. Nice job! The oak should work better than the Poplar or spruce option.
Let me know if that helps.
Fred

Thanks for the input. That is a great idea. I will give it a try.

There are a lot of lead-free low melt alloys out there that are cheaper than solder, Tin is usually about $10/lb, lead is certainly cheaper but, well, it’s lead. I prefer lead in my bullets and in my circuits, but not really in my body. If you look around you can get “Dietary Pewter” it’s fairly expensive (~$25/lb in small quantities) but this is what’s used for making cups and tableware. There are higher temperature alloys that incorporate tin and zinc, that are also acceptable for being handled without toxic problems.

It’s so weird you mentioned that.
Last night, before I fell asleep, I was just thinking of rigging up an old washing machine on spin cycle, for that exact reason!
I saw it done with lead fishing weights. Made hundreds at a time.
Oh yeah, These guys
http://www.tekcast.com/Fishing-Lure-Manufacturing-_c_120.html Someone with a Shapeoko could make a pretty good side business making these.
I might be re inspired. I’ve made ball molds on my mini mill from aluminum.
The Shapeoko would be perfect for making wax or wooden patterns for silicone molds.
Time for more research!

I prefer lead in my bullets and in my circuits, but not really in my body.

He did use silver solder, but that’s a good point!

I have never saw that before. Great site, thanks.

Lead is kinda on the outs as far as a fishing weight material, much of the new stuff out there is made of bismuth/tin alloys, which while mostly non-toxic, is pricey for what it is.

One of my big rants over the last several years has been about the inadequacy of lead-free solders for aerospace, as well as life-critical applications, namely in control electronics, explosive detonators, and other devices where if something does what it is supposed to at the wrong time, or doesn’t do what it’s supposed to at the right time, can end badly for the user. RoHS be damned, I still use lead solder. I simply can’t account for the possibility of whisker formation or tin pest causing problems. I had this issue a number of years ago with some flashlights, they were soldered using a lead-free solder, and the tin would revert to the alpha form whenever the temperature dropped below freezing, and our gear would simply stop working.

Most silver solders have higher melting points which makes them unsuitable for many electrical applications as it will damage FR4 along with many components while trying to solder. The rather generic lead-free solders do occasionally contain toxic metals such as cadmium, but way less than what you would find in regular eutectic lead solder.

Ditto on Sn/Pb solder… why fix it when it ain’t broke, and for the record, please don’t eat your electronics. I run production PCB’s on a local pick and place and they’re still a 100% lead solder facility. I pay a premium for leaded solder production over at Advanced Circuits.