The Death of my Shapeoko

This happened last night. I’ll preface this by saying I’ve had my Shapeoko for a little over a year and its been frustrating from time to time, but an overall good experience with the machine thus far.

I was running a proven program yesterday that is fairly simple. I make alot of inlayed cutting boards so I was cutting a pocket out to accept a rather large square inlay (its roughly 16"x17" and 3/4" deep.) Regardless, the machine was 2 passes away from completion and the night was getting longer. So, two passes do not take that long, but I figured I would get my things for the next day together in my house and by the time I came back out to put them in my truck the machine should nearly be finished and I could go on with my evening. I left, and as was well, I came back out and silence… … I peered through the window of the door near the machine and it was on fire. I’m lucky I caught this in time because it could have easily burned down my entire shop. The picture doesn’t show the piece it was cutting as I ripped it off to attempt to save it, but the pocket that should be 3/4" deep is nearly 1-5/8" What caused it? My best guess , based on a hick up I remembered from a few weeks ago, is the Z axis not moving correctly. A few weeks ago I noticed that when I homed the machine out one time, the Z did not move all the way home, but still registered that it moved. I shut the machine off, turned it back on and it moved correctly. I did this a few times and the issue did not return, so I thought nothing of it. I think this happened again, this time though I do not believe it raised to a safety distance (.2 above the part) after finishing a cut. So when it dropped down to make the next cut (-0.6875 from the surface or -0.8875 from the safety distance) it was actually dropping that distance into the part. Seeing as the .25 Emill I was using only had 1/2" of flute on it… you can see the problem. I believe that little DeWalt router just couldn’t handle it anymore and overheated, causing a fire, as the Dewalt trim routers do not have an electrical overload to my knowledge. The picture does not show it well but the cord to the router it nearly completely gone, pointing the finger at an electrical fire.

I’ve been machining on CNC both large and small, on many different materials for over 10 years and have never had anything like this happen. Pretty upset about it all as this machine has been the center of my operation for the past 6 months plus.

Worst part… not even paid off yet. And my Suckit Dust boot is non existent. 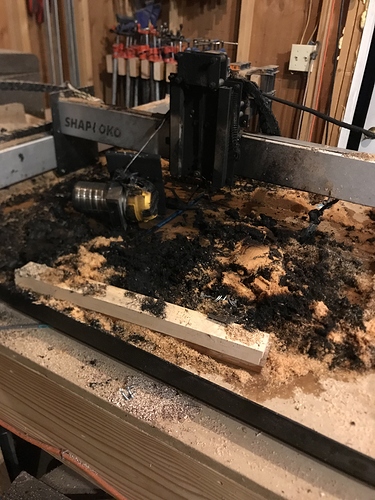 Did not expect that picture. Damn man sorry to hear that. Glad it didn’t get more than the machine. Looks like parts of it may be salvageable.

Christ. This is why they say never to leave them unattended.

I typically do not leave it unattended. I’m usually in the shop doing something else while the machine runs. I was gone for 15 minutes maybe. Crazy it went up that fast. If I’m constantly worried about this happening again, it’d just make more sense to do it all by hand. Or just say to hell with a CNC router and just go buy a small HAAS mill.

Also, attended or not , why is the Z axis having problems after 1 year?

Someone caught a a shapeoko fire on camera once. I can’t recall the cause of it but these machines like any other tool need to be maintained. I’m not suggesting you haven’t maintained yours but its easy to miss a slipping belt or nut out of tension. Usually this won’t amount to anything other than a bad cut. Things like belts and tensioners will slip and move over time, and that might be what happened to your shapeoko.

If your Z loose height then starts crashing around it can cause serious damage to your work space. Chuck in a bunch of wood dust friction and it’s easy to think a fire might start. Could just be your Z broke free, spliced the power cable and set things off… We won’t know.

Its worth emailing support, maybe they can advise or offer a solution for you.

Regardless this is a shame to see…

I plan on emailing them. This machine has had a lot of issues. When I first received the machine the control board was bad, needing a replacement before it would even move. I’m a stickler for accuracy (a lot of the machining I’ve done in my career has been for the Nuclear Industry or medical so a +/- 0.001 or less is typical. When the Z made the hick up a few weeks ago, I thought nothing of it because my laptop prompted for a restart at the same time, so I attributed the machine malfunction to the laptop, especially after I could not re-create the malfunction.

It is a shame to see this happen. We’ve been pleased with the amount for work this little machine can get done, but if we are constantly worrying about what the next thing to happen might be it be time to move up to something that is a bit more heavy duty.

crikey. glad you caught it before the shop went up.

Very sorry to hear about this.

Have you considered checking in on your homeowner’s / small business insurance?

I’ve raised this with the balance of the team and we’ll do our best to work with you on this.

We’re looking into it. We left a message with our agent. Hoping for the best, but we’re not sure.

Sorry for your loss Justin…Hope it all works out

It’s my understanding some homeowner policies don’t take kindly to running a business out of the home. Hopefully not an issue here.

We have a business policy. The questions is what is the deductible… I can’t remember and I went to my daytime job so when I get home I’ll look it up. Like a said in my post, the machine still isn’t paid of so we will have to really weigh if its worth it to replace or not.

Assuming things clean up well, looks to me as if you’d only need:

Let us know what parts you need and we can work up a custom invoice at support@carbide3d.com

I’ll have to look into it more once I get home. The gantry for sure would need replaced, The heat on it had to of warped it, even if it’s a few thousandths. But again, we have to weigh if it’s worth it or not.

Fair enough, I can understand the hesitation to immediately replace it if you weren’t able to pay it off and were having various non-fire based issues before this incident. It looks like mounts of sawdust, just curious what if any dust collection was being used.

Dust collection was on. The mound of sawdust is what the dust collection couldn’t keep up with because the E-mill was plunged almost 1-5/8" deep into the piece. I have a Grizzly 1HP hook up to it, which is plenty for it. but that much material I don’t think it could keep up with. Combine that with with the fact that the dust boot could only be level with the TOP of the part, not down in the pocket. I didn’t find any of the dust boot but I’m guessing it broke it when the router plunged super deep. It was going pretty fast too. I believe I run that program at 65IPM, .06 depth of cut, so it was moving when it plunged.

Also no offense to the makers of the Shapeoko, but it was my second choice. Coming from a CNC background I wanted to buy an actual CNC mill, fully enclosed, the whole 9 yards… but my business partner (my wife) said no lol.

I believe replacement parts are at or close to cost (that’s why they’re not listed on the shopping site) — I don’t think it’ll be too expensive to rebuild this machine to new condition.

It’ll be a lot to think about. With all of the other little issues, and this major catastrophe after only 1 year of use, we’ll have to look at what is more beneficial in the long run.

Worst case is I believe you’ll be able to recommission the machine for much less than you’d then be able to sell it for used, so you should come out ahead.

Worst case, if you sell as-is, where-is please assure any potential buyer that we will work with them to get the machine working again to its specifications and their satisfaction. No Shapeoko gets left behind.