Today's status on Fusion 360 for hobbyist

I’m just waiting for the free version of Carbide Create to match Fusion 360’s capabilities in every way.

EDIT: I’ve tried Fusion 360 a couple times, and if this were a business for me, I’d probably pay for it. As a hobbyist, my biggest complaint is that NOTHING is intuitive, you have to go watch a video to figure out how to do anything, and if you’ve been away from it for more than month, you have to start all over again.

I have paid for VCarve Desktop, and it’s pretty good and they don’t hit you up for too much money too often. Also, unlike Fusion, which is all things to all people, VCarve is a dedicated CNC woodworking application.

I’m also getting better at Carbide Create. It’s design features at the free level are decidedly on the level of 1984-era MacPaint (sorry guys, I call 'em as I see 'em) but in the same that 4 base pairs of adenine, cytosine, guanine and thymine can combine to create all life as we know it, there are ways of using the relatively simple set of tools in Carbide Create to get pretty sophisticated.

I was lucky enough to be paid to learn to use Fusion 360. If it weren’t for that, I would probably hate it. Only 8+ months into learning do I finally realize the tiny nuances of parametric modeling that will make today 2x slower but tomorrow 20x faster. I don’t have my ShapeOko yet, but I got a pro xxl and I’m looking to make a business from it. I feel like the $60 a month I pay is justified. I might even feel that way as a hobbyist since I paid for the software even when I wasn’t earning from it. The whole reason I picked fusion was knowing that I wanted to get into MFG in a serious way.

I’m hoping it integrates as seamlessly as I hope it will. If it does, it will be a game changer.

I use F360 free version, have done for a long while, and, like @Julien said, I’m ready to jump once it becomes too unfunctional. For my hobby work it is fine. The bit I missed was board layout but I paid a small sum for a plugin by mapboardspro which is great.

As in my Nomad 3 came with an Alibre license? I had no idea.
I see it now on the Nomad 3 shop page and there is a tiny
paragraph in the N3 getting started guide

You will receive a license and download link for Alibre Workshop directly
from Carbide 3D.

I would love to move over. How do I find out more, I checked my e-mail
(including deleted items) and never recieved the license e-mail.

Please write in to support@carbide3d.com and we’ll work out getting your Alibre license to you.

The limitations of Carbide Create are why I use other programs for all but the simplest of designs:

Program things as desired, then get a DXF to import and assign toolpaths to. (One of these days I’m going to find a node/block editor which allows 3D modeling and allows writing out G-Code files, and I’ll just use it for CAD and CAM)

For this morning’s example from a support ticket see:

Add a few lines to the exported OpenSCAD code to get a usable export:

Please write in to support@carbide3d.com and we’ll work out getting your Alibre license to you.

Once again, support are able to help. I found an Alibre voucher along with a calibration card both in a pocket on the back of the machine (never knew it was there!). I now have an option to wean off Fusion 360,

How have people determined that Autodesk is removing features from the hobbyist license? My hobbyist license expires next month and I’d like to know what I’m not going to be able to do. thanks

It’s an on-going thing, see discussion such as:

$480 a year to get rapids back for hobbyist?

I'm a hobbyist with a shapeoko 3. I rarely use my CNC these days and the last time I fired up 360 it was brought to my attention that rapids are gone unless you pay $40 a month. I generate maybe $200/year income (not profit mind you) with my CNC...

How have people determined that Autodesk is removing features from the hobbyist license?

Me, I learned it here on the forum.

The list of things that are actually a nuisance was discussed recently, here

I’m quite ok with those limitations myself, especially since they can almost all be circumvented. But YMMV

Here’s a link for the comparison between the free, and paid versions.

Download Fusion 360 for personal, non-commercial use. Get access to free CAD, CAM, CAE and PCB software for qualifying individuals here.

My hobbyist license expires next month and I’d like to know what I’m not going to be able to do.

You won’t be able to do anything if you don’t renew your free/hobbyist license: it won’t work at all.
Features and license changes can come and go during the active period so if you do renew
you shouldn’t be in for any surprises on day 1.

I’m new to CNC but have many years of electronics (printed circuit board) CAD experience and
when Autodesk slurped up Cadsoft Eagle they nerfed it. First they dropped the $170 perpetual
“maker” level which got you 6 layers on up to 160x100mm and made it $100 a year to get only
4 layers. That was just about affordable as I tended up upgrade every couple of years anyway.
But 4 years later they rolled the whole Eagle product into Fusion360 and now to get more than
2 layers on 80x100mm you have to buy a full Fusion subscription.

Eagle 7.7 going perpetually strong and I look forward to the same with Alibre.

Very interesting discussion. I agree with Julien - be ready to jump ship when the cost outweighs the benefits.

On the one hand - it’s free, as a hobbyist; it’s extremely capable; I’ve invested a lot of hours climbing up the learning curve; they do have a great support community; and the hobbyist restrictions don’t really cause me much grief.

On the other hand - it’s likely that this is only the start of the limitations on the free version.

Gripping hand - I’ll keep using it until the cost/benefit ration changes. And then I’ll have to start a new learning curve. Sigh.

That’s very frustrating, have you considered KICAD as a free alternative, it’s used by CERN so should be capable. There might be a problem converting your libraries and 3d parts over but there might be a utility to do that.
Cheers
Mike

Honestly Julien Fusion 360 is SO frustrating for me in terms of just trying to set tool paths from a pre existing file! I know that I’m no programming genius. But I DO have experience with some of the more difficult music recording and film editing APs. Fusion is so completely NON intuitive. I’m at the point where I just want to find someone to program the tool paths and pay them to do it.

Hey @vrdjs143, welcome to the community.
I think the intuitive-ness of a program is more likely to be based on what you’re used to.
Got a file you’re having trouble posting toolpaths for? Post the Fusion file here.

One thing is for sure (and I would know, I tried and failed): one cannot just launch Fusion360 and “figure it out” without learning a bit about the concepts and how it approaches the design workflow in a specific way.

Me, it all clicked after I watched that video tutorial:

Fusion360 tutorial videos for people who already gave up Unsupported

I recently watched this series of videos: and it seems to me that this is perfect for people who tried Fusion, got confused by the sketching/constraints/history line, and gave up after a couple of hours. He takes it slowly, from scratch, repeats things a lot (to the point where you think “yeah, I know, move on” a lot), and does a very good job of explaining the fundamentals/design approach for parametric modelling in Fusion, not just where to click to do something. And THEN once you are on the…

which is not even about the CAM side of things, but it does explain the approach of the CAD part, and then for the CAM part a few videos about the basics got me a long way.

For the toolpaths, I have found that:

Not trying to make a case that Fusion360 is easy to use (wait, why did I write a long post about this?), but if you are willing to invest 10-20 hours of learning it (and accept that it may not behave like other software), I think the design approach is actually brilliant and quite efficient (CAM included). As in all things, your mileage may vary.

I’m at the point where I just want to find someone to program the tool paths and pay them to do it.

Have you tried exporting an STL and using MeshCAM? It’s about that simple.

Fusion360, the paradigm of intuitive design and interface. Who actually needs to adjust the parameters? In Autodesk we trust.

Looks more like your machines fault, I don’t have that issue with my 8 year old machine. 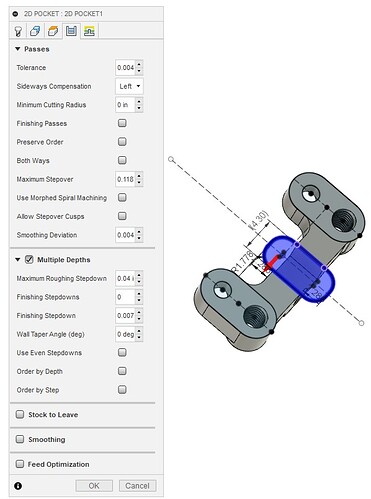