These will BUT…your electronic enclosure is MUCH tighter than the Shapeoko and not as easy to get too, so I think you would need to drill a hole for the cables, and most Nomad users don’t own a hand drill… Why wouldn’t the touch probe work with the Nomad?. I already have the Triquetra wired to the tool length probe and it works fine. Is it just about physically modifying the Nomad?. I would be really disappointed if it didn’t.

It DOES and WILL work with the Nomad. The only problem is the installation. 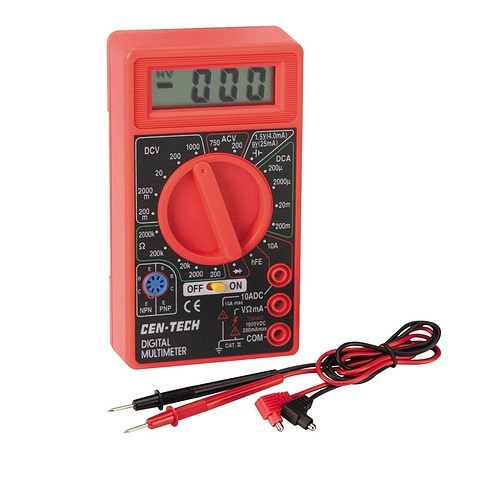 Not automatic, but add alligator clips and it works good.

@RichCournoyer Thought so. I have no problem with modding my Nomad. Have done that already. In fact, I probably already have all the rewiring needed to be done. I had bought the Triquetra a while back but didn’t like that I couldn’t use it with Carbide Motion and automatic tool length probing.

I use the aluminum tape for edges and corners, centers, misaligned parts, material heights and tool length referencing but with this multimeter it only gives a signal because it doesn’t connect to the board, correct??

it doesn’t connect to the board, correct??

No it doesn’t.
You can put it on OHMs, put a clip on the tool, and one on the tape. As soon as it makes contact, you get a reading. Some beep too.
You still have to manually move the machine, tho, and type your zeros.

So a blog post release of a new Carbide Connect but still not a mention or post here about the status?

Rather disappointed in the Carbide3D team here.

A simple, ‘not yet ready- we want it perfect for you. We hope by xx we’ll have nailed it.’ Something…,

get the triquetra from the guy at inventables {he’s offering a fathers day special} and don’t look back! Waiting for this one will just make you grey. Very disappointing!!

I’m sure this is also why a new CM release hasn’t come out. Looks like it might be something last minute. On the software download page it looks like they were all ready to release CM4/GRBL1.x, then backed away. I’m sure they’re close.

I do agree, a little progress information would be nice, but @RichCournoyer has been making pretty regular reports on it recently. I really can’t blame them though, as soon as you say anything is coming on the interwebs, everyone starts complaining it’s late/not good enough/ridiculous/not as good as X…makes you not want to say anything at all until it’s all ready to go. I would guess that’s also why they didn’t offer pre-orders.

I really can’t blame them though, as soon as you say anything is coming on the interwebs, everyone starts complaining it’s late/not good enough/ridiculous/not as good as X…makes you not want to say anything at all until it’s all ready to go.

Yep! And if they ship them and there is a problem w/ the software, people will complain about THAT!

I saw a picture of quite a few of the touch-plates, I’m confident they’re working as quickly as can be.

I really can’t blame them though, as soon as you say anything is coming on the interwebs, everyone starts complaining it’s late/not good enough/ridiculous/not as good as X…makes you not want to say anything at all until it’s all ready to go

I agree with you here - They opened this can of worms on August 18th of last year and then have said virtually nothing since. If they are going to make an announcement, they should be prepared to at least provide some ongoing communication at minimum every month or two of the status of said announcement - especially if delayed.

The concern isn’t the time between announcement and release (it’s nice to know if something is coming down the pike before dropping time or money on other solutions), it’s the utter lack of communication afterward. Prusa MK2 multi-material extruder is a great example - they announced in late sept., developed problems only apparent after beta release and gave a few updates until the were ready to start shipping.

I don’t think it is a huge time commitment to drop a note or a short update rather than leave us hanging for 10+ months… Anyway - off my soapbox. The triquetra $50 deal looks like a great option…

I completely agree, that would be contrary to the whole open and hackable concept that Carbide3D has embraced.

Actually, I don’t think I would buy one if that was the case, I’d use bCNC more, and CM less, and get a different probe.

I wondered the same question. @RichCournoyer has confirmed that non-proprietary probing is unchanged in CM v4

The C3D Touch Probe does NOT affect and or hinder the use of other probes. I also have the Additive Aerospace probe and use BOTH Probes in my daily work.

Rich - I have the Additive Aerospace limit switches with the probe interface, but I had to come up with my own touch plate. did yours come with the touchplate? I know there is not much to the plate, just curious.

No, since everything I probe is conductive*, the Additive Aerospace Probe was sufficient. I LOVE the macro on the C3D Touch Probe, since it is essentially set it and forget it.

Can you give us a preview of the Macro? I’m itching for this, I made my own touch probe, but the script is a pain in the bum!