I’ve just started in the world of cnc. So far so good except I can’t seem to figure out why while v carving I am left with small dimples in the design seeming to be from unnecessary tool plunges into the design.

Carbide Create converts everything into polylines, sometimes it gets confused by the points of the polylines when cutting rounded features — if you have a file which is particularly egregious please send it in to support@carbide3d.com and we’ll try to have a developer look into it.

Thank you for the quick response. Is there any other way around this? Should I be using a different bit?

Do you have a picture of the dimples you’re getting?

Yes. The link is above. (If it works)

I carved a test piece and got dimples. I think the image was too busy but thought I would upload the picture and the files 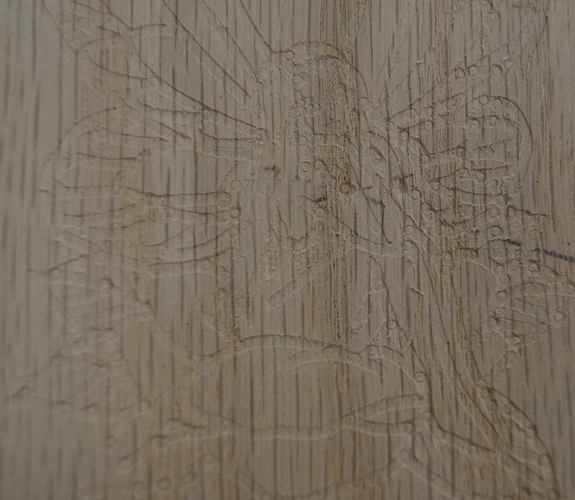 that looks odd, almost like you’re not using a “true” V v-bit
(like something with a bit of a dull tip)

but your dimples seem to be made with a normal flat endmill… not a vbit? 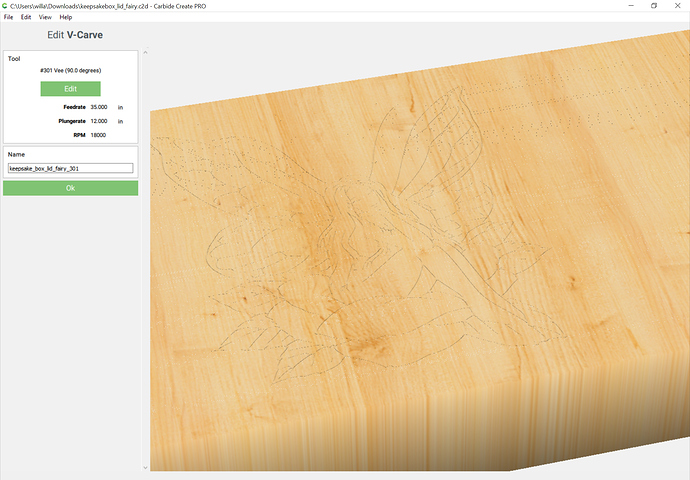 After I posted I went and pulled the bit out of the router and the tip is damaged. I put a new Frued 20-104 90 degree 1/2 inch bit. I re ran the job and still got some of the little dimples but not as pronounced. I looked at the old bit with a loupe and the new bit and the old bit definitely has the tip broken. I looked at the new bit and it has a perfect vee at the tip. This svg is probably too small for the area I am carving in. I will take a new picture tomorrow and post it . The tool path name has 302 in the name because I was testing both the 301 and 302 bits to see which one cut better. The actual tools are Frued 90 degree and Frued 60 Degree 1/2 inch bits. I used a high res digital camera to take the picture and croped it in Adobe Lightroom. I am just too tired to do the picture and editing tonight. The picture above was cut with a 90 degree vee Frued 20-104

Attached is the same fairy done with the new Frued bit. Also there is is picture of the old and new Frued bits. Hopefully you can see the old bit on the left has a broken tip I tried to put some blue chalk on the picture of the fairy to enhance contrast. 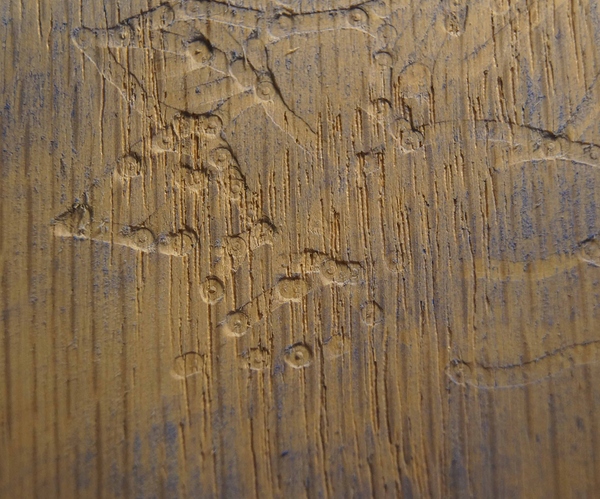 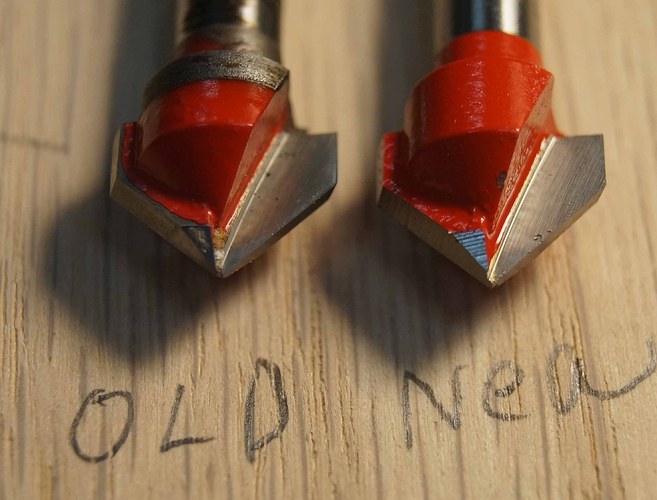 Isn’t that a V endmill design which ends in wedge/chisel shaped tip rather than a point?

The end is a continuous vee shape on the end. There is a cut on both cutting faces but it still makes a pointed vee shape at the tip. My older Frued bit did have the tip cracked off. Frued sells these as CNC router bits. Right now I dont have another 90 degree vee bit to try. Luckily I had ordered some new ones and had just gotten 2 new 90 degree Frued Vee bits the day I saw the post about the dimples. When I cut the fairy test piece I wrote it off as an image problem.

I’ve seen similar results as well as cutting a flat bottom in a v-cut, I traced my issue to runout (measured at just over .025 in) of the cutter in a collet. I replaced the collet with a high grade with less runout (under .003). (I’m using a spindle with a ER20 collet)

I am pretty sure that I have a 1/4 inch precision rod that I will install tomorrow in the collet and check the runout. My router is a Dewalt and the Dewalt 1/4 stock collet. I do have an 1/8 inch precision collet that I got somewhere, just cant remember where now.

As I said earlier I have not seen this circle with the dimple in it before. I just saw this on this particular carve and wrote it off at the time as I had shrunk the image too much and was cutting in in a 4" tall X 8" wide space.

Following on to what @WillAdams said above, what happens if you just roll that router bit on the table and watch the point? Does it rotate in a circle?

The original bit had been abused. I was using to get my Shark Pro Plus HD to work with cc. I was trying to figure out which gcodes worked and which gcodes did not work. In the beginning the router would plunge deep into work piece and try to move a half inch buried in the work piece. The second bit was brand new out of the package. It is possible it is out of round but the way it is made I don’t think I can roll it to tell if it is concentric.