I’m not an expert on machine code but it seems to me that I could use the bit zero and it’s probe cycle to indicate center on an aluminum part I have on the Nomad at present. Instead of using the bit zero hole I would use the 6mm hole in the aluminum plate. The plate would be grounded to the spindle. Where am I going wrong.

You may want to look at:

Hey folks, I’ll try to be concise here. I’d like to probe conductive stock on the nomad 3. This is a bit of an issue as the stock needs to be isolated from the bed. I am thinking I can isolate my vice with a layer of delrin and connect my probe to the vice. Then my entire vice and the conductive stock it holds becomes a probe…neat. BUT I would still have electrical contact via the bolts going into the threaded bed of the nomad, not neat. So I need a way to secure the vise to the bed in a non-…

Well I guess its back to the drawing board. Chris is right about the workpiece needing to be isolated. I would add that the alternative would be to isolate the probe, non conductive shank, conductive tip. But I don’t think there is such a thing. I found a touch probe on amazon. Its compact in size with 6mm shank, I’m thinking that at a minimum I could connect to external power supply and jog the probe in the hole using the building in trigger light. Ultimately I would like to see if I can plug into the Nomad and use the bit zero probe cycle. The unit has 3 wires, power, ground and signal. However the unit can be purchased NO or NC. Do we know if the bit zero switch is NO or NC. Is the circuitry the same. Operating input voltage is 5-24vdc. 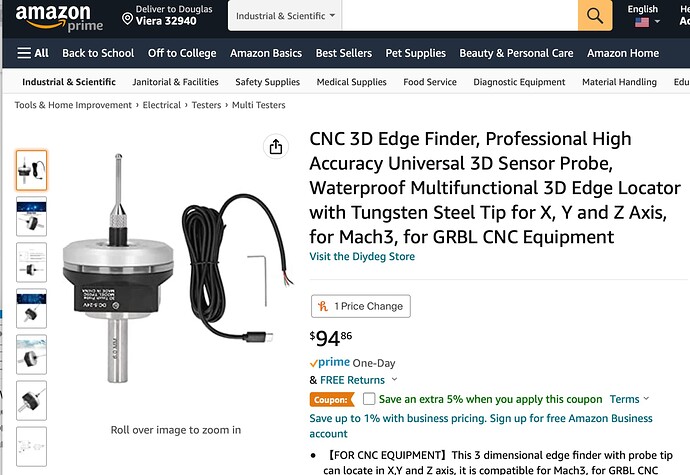 I have the same or similar probe for my Pro. The exact one I purchased was:

It is NPN-NO which is what you want for the Pro and I would assume also for the Nomad. It seems to work well, but I’ve never used it on anything that requires high accuracy because I normally use conductive probing with my ungrounded Carbide router.

The three wires are exactly what you need for the probe connection: +/gnd/sig. You just need to get the order right.

Thanks for your help. I’ll get the pin position and connector type from the C3D folks.

Here is a good thread on a nomad probe. I’ve considered getting the same touch probe myself:

Good question and something I have spent a while looking at. A Shapeoko ATC is a very cool idea but really needs to be well thought out. As standard GRBL doesn’t support any kind of ATC function, there are no dedicated outputs, no stored tool offsets, no function around tool carriages. It also requires a ATC spindle of some variety, a bunch of inputs/outputs for safety and likely air or another kind of pneumatic device to drive the tool changer. All in there is a significant gap …

@dough_kennel That probe looks very interesting. If you ever get it to work with a Nomad, please let us know — I’d be really interested to learn if it works, how trouble-free it is, and whether it is precise enough for things like two-sided machining.

Jan:
The probe is well built. Impressive for a China product. Carbide 3D was of no help when asked if the probe could be used with their bit zero probe cycle. All I got was a liability disclaimer and a caution about using 3rd party components. They wouldn’t even provide a circuit diagram. After pushing back they finally relented and said I could find the wiring legend inside bit zero. The circuit board identified the 3 wires as grd, signal, grd. Absolutely no help. I decided to scrap the probe cycle idea and hook up to a 5v power supply. I just got done testing on a .276 hole in aluminum. The center of the hole on nomad is 0, 0. I put the probe in the spindle. Jogged to 0,0 and dropped the probe into the hole. I jogged each direction until probe triggered red and record the number. I did this numerous times with a resulting deviation from 0, 0 of .0015 repeatable. Giving the potential runout in the spindle, collet and leadscrew backlash I would say thats pretty good. I guess the next thing would be indicate the runout on the spindle and probe tip but that becomes a science project (the probe has 4 grub screws for adjustment). All in all I’m pretty impressed given the cost of under a $100. Right now when I flip the part I find center using precision pins and a slip bushing. The deviation from zero has been between .0015 and .002. Given the quality of the nomad components I think .0015 is as good as it gets.
Regards Doug