Hi I am setting up cncjs on my fusion5 tablet to use on my shapeoko pro xxl. I tried using the bitzero like normal as per instructions in this tutorial I’m following CNCJS - For beginners with Shapeoko 3 - YouTube but the endmill just kept pushing down into the bitzero and wouldn’t stop. I used bitsetter first to determine length of endmill, what am I doing wrong? Thanks in advance!

What does this mean? So you were just probing for zero?
Can you provide more detail?
You need to set your Z-zero before running the bitsetter macros.
The procedure should start with:

I was using Bitzero to find the zero for X, Y, and Z.

So I should just turn on my machine, connect cncjs, home machine, use bitzero to find X+Y+Z, and then use bitsetter to find Z of my initial tool?

But in order for bitzero to work properly, don’t I need to use bitsetter first to identify length of the tool (1/4" probe) I am using for the bitzero sequence?

But in order for bitzero to work properly, don’t I need to use bitsetter first to identify length of the tool

No. The tool length doesn’t really matter in this use case. All that that matters is where the bottom of the tool is. The bitsetter just establishes an absolute reference for that tool’s bottom.
While you’re trying something new, check out gSender. Has more momentum behind it.

@neilferreri I’ll throw this out here again for you to consider… If you make this change to your macros then you can change the z height without having to remember to run “initial” tool after doing so. That change is to record the distance that the probe has to travel to the bitsetter instead of the Z offset of the bitsetter. The initial/new tool macros then become independent of the Z zero position which I find to work much better for how I tend to work:

BitSetter: Record the travel distance not the final position

This makes it possible to reset the Z zero position without having to remember t…o rerun the Initial Tool macro. When probing, compute the distance that the spindle had to travel to trigger the probe. For a New Tool, offset the current Z zero position by the difference between the last and the current distances travelled.

Thanks @crpalmer. I saw this earlier, and it looks pretty good! Personally I don’t think I’ve come across a job where I needed to do this, but I can see where this would make things less prone to human error.

In the @gabrielcampbell’s case, I’m not sure where things went wrong…we’ll need more detail. That video by @ogbulldog looks like it covers it pretty well.

Hi @neilferreri I’ve attached a youtube video to specify the issue I’m having. 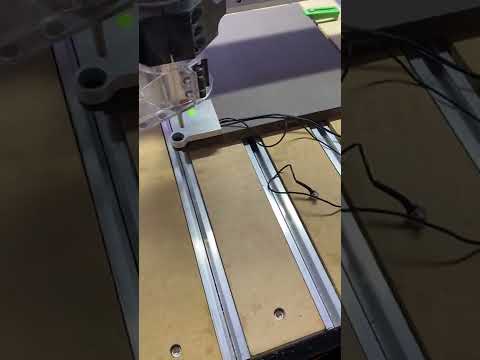 Noob question here but what are all the pro’s of using cncjs instead of carbide motion? And are you saying I would be better off just using gSender instead?

Can you also post the contents of the macro? 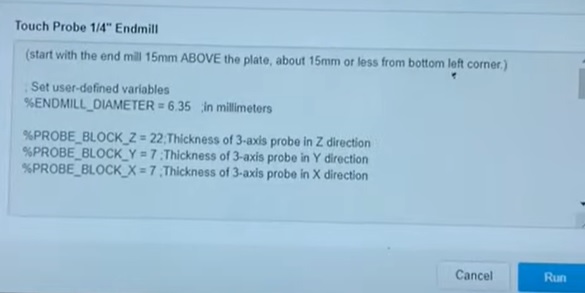 That’s just the start of the macro. Can you edit the macro and then from the edit screen copy and paste all the text of the macro?

(start with the end mill 15mm ABOVE the plate, about 15mm or less from bottom left corner.)

Hi @gabrielcampbell.
I’m not sure if you saw my reply above. That’s a macro for an earlier version of the BitZero.
It will not work with the hole on the V2.

Where can I find the macro for the Bitzero V2?

I don’t have a BitZero to create one from.
You could modify this one:

Or, just set zero by eye.

What are the pro’s of using cncjs over carbide motion?

That said, here are some concrete examples of what I want to do in gSender that I cannot do in carbide motion:

Some other quality of life items would be the widget interface and native webcam support.

Carbide motion has been great and i still use it daily. They are also adding more functionality all the time and I expect much of the custom functionality will be possible someday.

Until then, I’ll be running both motion and a third party sender.

Thank you for the thorough response Tyler! Well said that “you will know when you need it”. I’m gonna stick to carbide motion for now but will keep cncjs in mind for when I might need it.