OK. Lemme see if I can explain myself here. I’m starting to dig into the world of v-carve inlays. I was mocking up a simple square inlay in CC. I noticed that it appeared that I would have a small gap in the corner of the inlay due to the base of the male cut being rounded. This can best be explained by looking at these screen shots. The first is the overall project to give you an idea of what you’re looking at in the close up. If you look at the closeup (including the tool paths), you’ll see that the base of the outside corner on the male piece is rounded. That’s due to the fact that the v-bit would not need to follow a square path to cut the square at the surface of the material. The closeup shows that the outside corner of the female part is rounded, but this is a rendering issue and would be perfectly square when cut. Is this something that you guys have experienced? Am I doing something wrong? Is there a better way? I hope I explained the concern clearly. 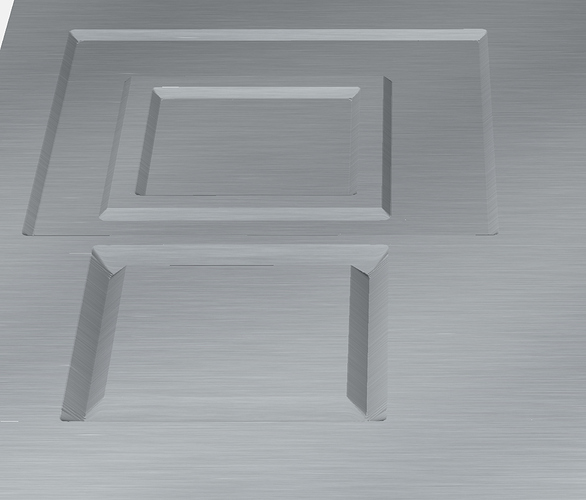 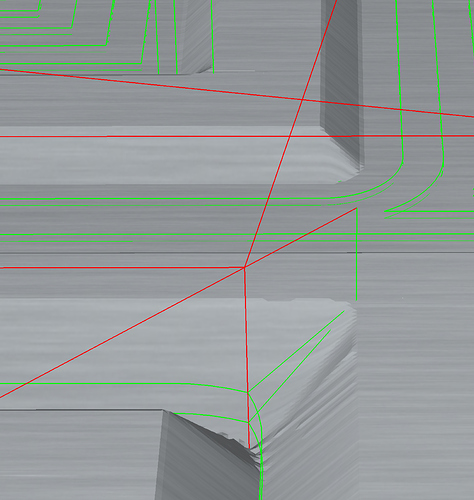 Am I doing something wrong?

Quick version:
The male inlay is cut with a Z zero below the surface of the stock. That depth offset would be the depth that your inlay will push down into the pocket until the outer profiles meet.
As you have it, the profiles would match at the surface. The plug would sit on top of the pocket.

By the way, the roundness might just be a preview issue.

as a side note,
I made some diagrams for the physics at

I’m tracking that you are manually lowering the z. I was thinking you needed to raise the z so that you would create a flat top on the plug for glue space. But the part that I’m confused about is getting the v bit to cut the opposite side of the line and create a peak to fit into the valley. By just pocketing the other side of the line you’re not creating the matching side. I feel like you need to explain the offset and geometry selection a bit more. I’m thinking the start depth on the main piec…

Thanks @neilferreri. I understand what you’re talking about with the depth. However, I wasn’t trying to be super accurate with the model. The problem persists even if the z zero is adjusted as you describe. This model was done merely to illustrate the core question about the roundness of the base of the male inlay piece in comparison to the squareness of the matching corner of the female piece. There is a preview issue with the roundness, but it’s with the rendering of the inside corners. You can see what I mean by looking at the tool paths.

I’ve seen those diagrams @fenrus. They are very helpful thank you.

Here is another drawing that might help explain myself. 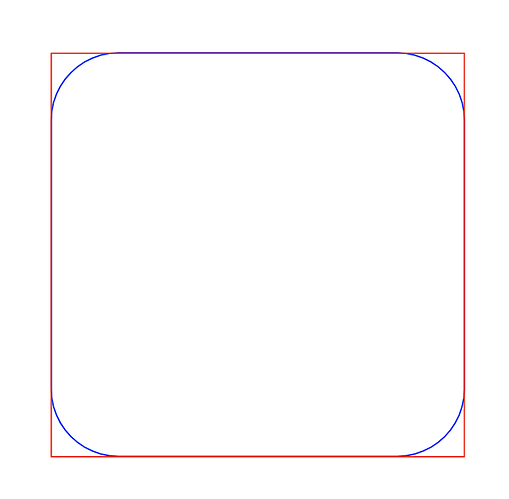 Screen Shot 2020-04-27 at 11.48.11 AM758×744 8.71 KB
Here you see a red square and blue rounded rectangle. Imagine that what we’re seeing is at the surface of the Inlay. The red box is the border of the female portion of the inlay. It has perfect corners to match the square that it was modeled after. The blue box would be the cross-section of the male portion of the inlay where the width of the carving matches the width of the red box. Otherwise stated, it’s close to the base of the “pyramid” that is the male insert. The way that the v-carve algorithm works causes the path at the base of the male pyramid to be a quarter circle (as seen in the tool paths above). The closer to the top of the pyramid, the smaller the radius until at the top of the pyramid, it is perfectly square matching the original model. Hope that helps and doesn’t add confusion.

base of the “pyramid”

base of the male pyramid

That won’t be where the profiles match.

Sorry. I’m still not explaining myself clearly. Those references were about the same part of the inlay, the male part. I will post a better model making it easier to see as soon as I can be back on my computer.

No model needed. I understand what you’re saying. Can you run a simple test with an actual carve?
Maybe I’ll but the bullet and try CC.
Can you share your file?

Sounds good. Here is the CC file (simplified) with a screenshot of how it looks now. It’s a lot easier to see what I’m referring to. Look at the base of the pyramid on the right. It’s rounded on the corners. When that pyramid is cut off and flipped, those rounded corners will be at the top of the pocket on the left. The problem is exaggerated the deeper the inlay is. Maybe the reason it’s not usually an issue is because inlays are usually not deep enough to cause it to be noticeable… 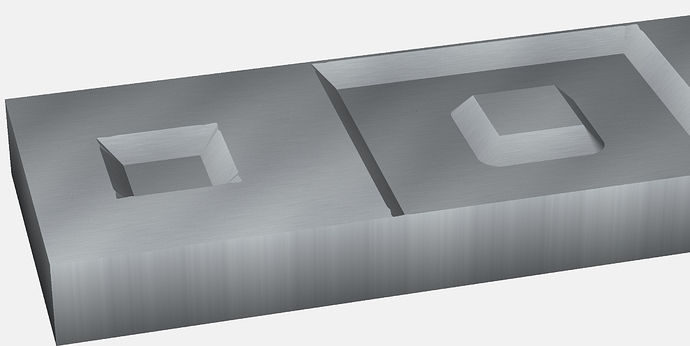 The entire surface from your right hand picture will not end up in the pocket, some will be need to cut away after you insert it into the pocket in the left to leave a smooth surface. The rounded edge you are referring to are parts that will be cut off.

I was thinking more about this last night. This side-affect is part of the reason that people get better results from a 30 degree bit than they do with a 90. With the 30, the radius at the bottom of the “pyramid” would be significantly smaller than the one created with the 90 degree bit.

@Oilrunner You are correct, but the radius carries all the way up the corner shrinking as it goes until at the very top, it is a perfect corner. The only way there wouldn’t be a gap is if the male piece was cut so shallow that it barely went in at all.

@bikerdan The main issue is with your design. The squares should be drawn the same size. Your pocket is 2.75" square and your inlay is 2" square. You want those to be the same. Beyond that, I’ll ask that you trust the process and run a test.

The only way there wouldn’t be a gap is if the male piece was cut so shallow that it barely went in at all.

Make some sawdust and see if your theory is correct.

@neilferreri. You’ve been super patient with me as I slowly crawl out of the hole of inexperience.

. I think I just realized where I’m struggling. The model that I was using as a demo was cheating as you alluded to in your last comment. I adjusted the male square slightly smaller so that it would fit within the pocket. However, as you mentioned before, and I wasn’t ready to be able to understand it, “the profiles don’t match”. That finally clicked with me. If I actually followed the method, the profiles would be perfectly the same, but the profile of the male cut would be moved down to just above the height of the bottom of the female side. The bit will still ensure that the profile itself has square corners. I tested this in CC itself by adjusting the toolpath of the male cut to have a start depth close to the depth of the pocket. It revealed that the “cone” portion of the pyramid only goes as high as the profile was set. It’s very hard to explain so I hope this comment makes sense. Suffice it to say, I finally understand and you’re right, “trust the process”.

You guys are great. Thanks for your patience with a CNC newb.