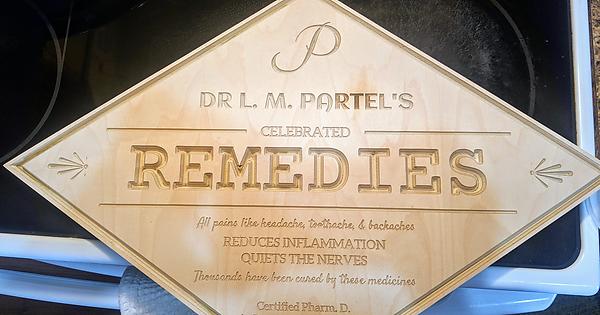 HDZ dripped lube on a letter in the last 5 minutes…

So yea, no major issues other than that. Fine letters in the lower half and the Liberty Bell needed some cleanup due to fuzzing, but minor sanding and a light brushing with nylon bristles cleared them out. I plan on using some stain with a quick wipe on/wipe off so the lettering and details get most of it, but the face doesn’t. Haven’t decided what yet though. It’s intended to be indoors-only so at least I have options.

Due to the lube on the T, anyone got any recommendations on hiding that?

You might have to make the wood match the spot to some extent…
Mineral oil or something similar. I guess it would depend on how you intend to finish that?

I would take a scrap of matching wood and put a dab of grease off your hdz rails on it. This will allow you to try out different methods of removal/mitigation without risking your piece with the finished cut.

Maybe soak the corner of a rag with mineral spirits or other solvent and try to lightly wet the spot and blot the surface with a dry portion of the rag, (while being mindful not to spread it and make it worse) essentially trying to “loosen and lift” the grease on the surface. Doing that in combination with some delicate sanding might help “blend” it in. Total shot in the dark, though, as I haven’t had that issue.

You will probably need to use an oil-based finish no matter how much of that you manage to remove. You won’t get it all.

IMHO, clean up as much as you can, then put on a dark finish. It shouldn’t stick out so much. Your sister’s name will look good highlighted in dark!

Perhaps fill the letters with black paint, sand the excess off the front, and stain the rest. Should still look old timey if you do that. Or gold leaf in the letters for some old style bling.