I am designing a box top for my hot water camping shower. I intent to use this on more boxes for more camping stuff. The issue is with the camp fire in the middle of the design. I made a tool path with #302 for a vcarve but in the preview it looks awfully thin. I tried another tool path with a #112 (1/16" bit) but that looks very jagged in the preview. I could try to make the camp fire bigger and hopefully get a little more depth.

The material is .75" plywood. I tried the vcarve with max depth of .15" and then using stock bottom. Both previews looked the same. So I guess it is just the width of the camp fire.

Any suggestions would be appreciated.

I made the curved text in Affinity Designer. I am not sure about the font but that is a separate issue that is purely ascetic.

You could make the elements of the fire ‘fatter’ without making it bigger by using ‘Offset Vector’. The current vectors for the fire are about .125" apart.

I did ‘UnGroup Vectors’, then selected the interior vector of the fire, and did a .05" Inside offset. Delete the old interior, regroup.

Overall size is the same, but the fire carves are about 40% wider. 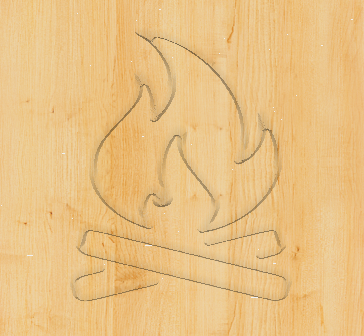 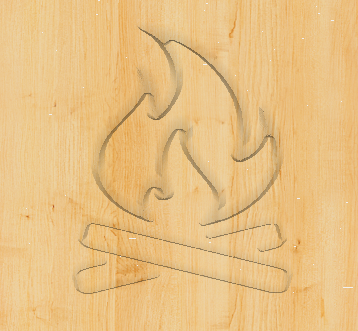