Just completed a project using some thin material (.180) and was Vee cutting with #302 and it DESTROYED my brand new T-Track kit. This is super frustrating and makes no sense that in any case the software would generate Gcode that puts the cutter below the stock bottom. I know it’s “waste board”, but the aluminum track didn’t see it that way.

Is there a way to set limits with some custom commands or something? Or some post processing for gcode that looks for these kinds of potential issues?

I don’t know what software you are using but you cannot put a depth limit using Carbide Create like you can in VCarve where you set a maximum carving depth. Carbide create will try to touch both sides of the letter/feature you are trying to carve and not give you a warning that you will go through the material. In VCarve, for example, the software will tell you that the depth of the material has been exceeded when you calculate the toolpaths. You can press OK because this what you intend to do or cancel and modify the toolpaths.

Sorry to hear about that.

If you set the stock thickness correctly the preview will show that it is cutting through: 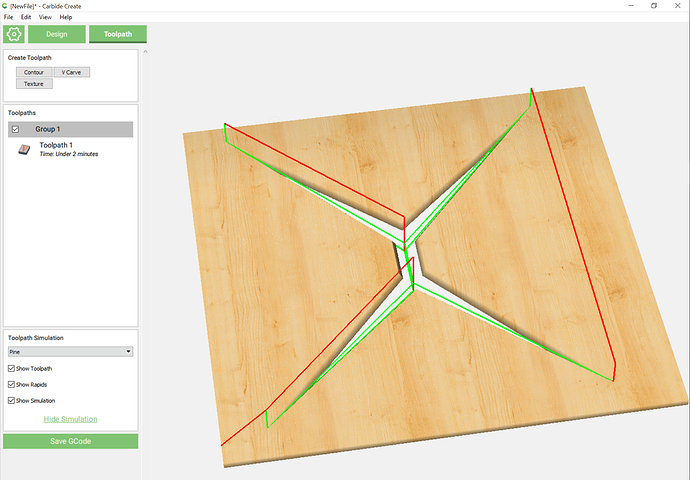 For a work-around see:

Will,
Thanks for the response! I had the stock thickness set correctly and I did see that I was going to cut through, which I has assumed would cut through to Z0. What I did not do was flip the simulation over to see that the tool paths were extending below Z0.

Personally, I think a warning either in Create or Motion would be awesome. My guess would be that 95% of people using Create/Motion are never intending to cut into their wasteboard. Love the machine though, and thanks again for the reply.

I may be mistaken but I don’t think that Carbide motion knows the thickness of the stock, it is just a sender and will do what the GCode tell is to do. It would have to be Carbide Create that warns you.

Yes, I think you’re right there. It only knows where you zeroize, it would have to include a reference to the wasteboard to be of any help for a warning. Essentially, if you told Motion where the bottom was, it could be sure to never go below that.