What are the exact locations of the table holes?

Does anyone know the dimensions of the table’s hole locations such that I can create custom fixtures that bolt into them?

As far as I can derive from measuring the table, the dimensions are as depicted in the attached photo.

Can anyone confirm that this is correct?

I don’t have the CAD in front of me but from memory those are close. The one thing to note is that the table is not exactly 8". We have them cut by our metal vendor but we do not profile the edge. Any dimensions should be from one hole to another, which is a dimension we control, but not from the edge, which can vary from lot to lot.

I appreciate your attention to this forum.
I have a suggestion regarding the waste board .
If there is a way to mark each waste board at a corner such that it makes it
easier to measure from, such as a 0,0 Datum in a drawing, thus might be helpful for measuring.
It could be done with a laser engraver, possibly.
Tem

Have you considered marking the waste board using the Nomad?

Would a single drill point do such that it would help to zero X and Y while the top of the board could be used to zero the Z?

I appreciate your advice.
Yes, that’s what I would do. I’m just thinking that if Carbide3D could mark the waste boards initially, then that might save many people some time. Maybe, mark the boards with the words,“run surface script to level the waste board”, as a reminder?
I guess, if all the waste boards are inconsistent dimensionally, then it’s better to surface them initially.
It’s just another step in the process. 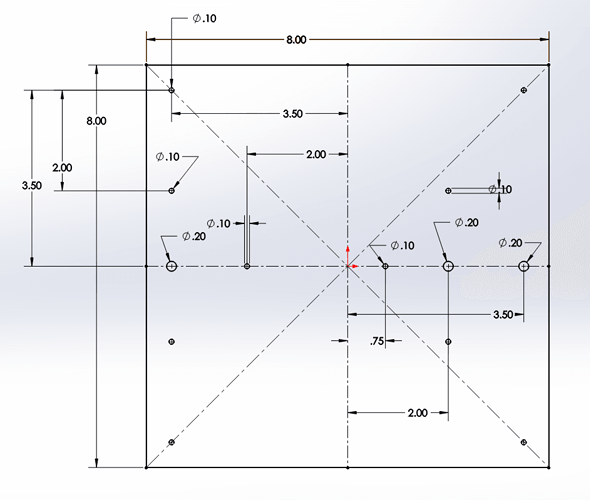 So I’ve sketched up what I think to be the location of the pins and threaded holes in the nomad table based off of centers. The 0.10 holes are just markers for the threaded holes.

It would be great if Carbide 3D would provide the CAD files for the bed. I’d love to custom make mine.

Just to close the loop here, the file is at Replacing the Nomad bed