Had a failure of the x axis this morning. After restarting, trying to initialize, x wouldn’t move, though it was trying. Sounded like someone was riding the antilock brakes…

After about two hours of resetting and troubleshooting, a tiny black set screw fell out of the gantry, and I’ve been able to determine that it’s one of the set screws that holds the gear onto the x-axis motor. It must have been wedged

I’m trying to correct this but I can’t seem to pull the gear off the shaft. It should slip right off as far as I know, but It’s on there and just not budging. Tried prying it up lightly with hand tools but I’m worried about irreversibly damaging the gear or motor or possibly bending the shaft.

So - any thoughts on how to remove this gear and correct the positioning without having to go through support? I’d like to fix this today so I can get back to cutting.

Do I need to find a gear puller kit at harbor freight or something?

Also, if I do get this gear to come off, can anyone confirm some measurement that will help me set the depth of the gear on the shaft? 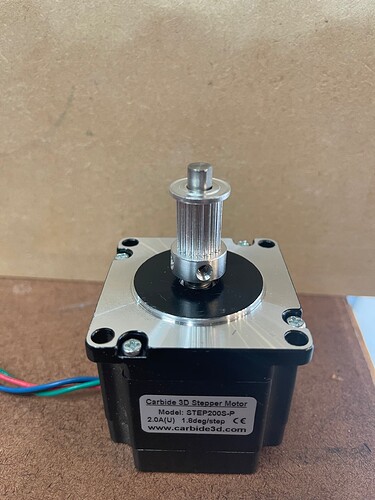 If you can’t lever the shaft, let us know at support@carbide3d.com and we’ll get this sorted out.

Gently use 2 wide blade screw drivers to pry the pulley off. Be sure to loosen/remove the second grub screw on pulley. After removal put one of the grub screws over the flat. Some use removeable locktite. Some replace the tiny grub screws with longer cap screws. Do not use permanent locktite. They are 3mm on Shapeoko 3 but not sure of size on 4 machines. A 10mm screw length usually works.

There was no gently with this gear. I ended up having to make a jig to hold the gear up while I drove out the shaft from the gear with a pin punch and a hammer. Putting it back on was equally difficult. Reassembling now. 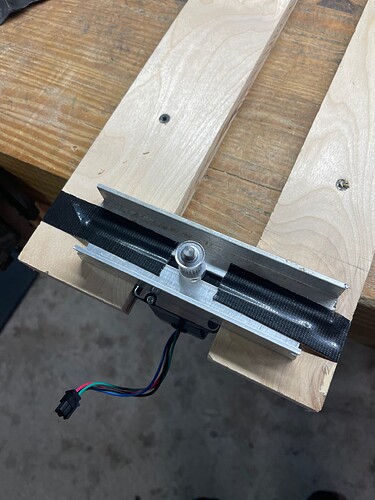 I would suspect the motor shaft getting gouged up by the set screw getting loose, allowing the pulley to slip, making it hard to come off. I would have taken a stone to the shaft to remove any burrs, if any.

Agreed, getting the burrs off will help during reassembly, both in reduced force required and potentially better concentricity of the pulley on the motor shaft.

For anyone else doing this in future, it would be a good idea to use, or knock up with some bolts, a puller to apply a smooth continuous force to the shaft and pulley, hammering the motor will not make friends with the bearings in the motor.

There were no burrs, nor scars from the set screws. That surprised me, I should’ve seen at least some kind of dimple or circle… There was a remnant of what appeared to be some red liquid on the shaft, which I had assumed was a kind of locktite. It was hard, like a dried resin. I cleaned it off with alcohol and then acetone. Whatever it was came off with the acetone and a bit of scraping from a razor, and then I polished both the inside of the gear with a dowel and the shaft with 600 wet paper. Then cleaned then again with Alcohol. All of that done, the gear still needed to be driven into the shaft to put it back on.

Did you try heating the pulley (to expand it) and cooling the motor shaft (to contract it)?

No, Will, I didn’t. I’ve done that when steel has rusted, or when dealing with friction fit rings, but we’re talking much larger vehicle parts. I wouldn’t normally think to heat up a piece this small.

Early after setting up the machine, I noticed some play in the y travel and found that the set screws on that gear were loose, and the gear was spinning pretty freely on the shaft. I corrected the orientation of the shaft, tightened the set screw, did it on both sides for good measure, and it was fine. But the point is, that gear slid on that shaft very freely, which is what I’d expect with a gear on a shaft with a flat key way for a set screw.

I didn’t disassemble and inspect the x axis motor at the time, but I wish I had.

My question is - is there something different about the way the x axis is assembled? What is this red stuff? It’s not threadlocker, the set screws were clean. It’s almost like it was meant to adhere the gear onto the shaft? Why would that be used in an assembly that is designed to hold mechanically with two set screws?

Those are all good questions — please write in to support@carbide3d.com and we’ll try to connect you w/ someone who can look up the answers.

A few of us have had similar issues. The red material is Red Loctite which was meant to adhere the shaft to the gear pulley. The placement of the gear pulley will depend on how it lines up with the belt pulleys on the back of the z axis. You will have to check, because I am not sure if any of the parts have changed, since I purchased mine when the Pro first became available.

I used two pry bars (one on each side) with padding in between to gently pry my gear pulley off. When it came time to place it back on the shaft, I used an old socket on top to gently tap it down with a hammer.

Here a link to a discussion that a few of us had awhile back that might help.

As far as placement, TX_diy was able to turn his gear pulley around with the large end of the gear pulley opposite of the motor and flush to the end of the shaft and have everything aligned. I had to extend the flat area on my shaft with a file and keep the larger side of the gear pulley toward the motor. Mine ended up being installed very much the same as in your picture. The key is to have one of the set screws secured against the flat area of the shaft and the three pulleys aligned. My method was probably not the best, but it has worked great for me so far without any issues.

I had the same failure last week. After reading this thread, I pulled the motor and removed the gear, although not with the same difficulty that Pr. Eckles encountered. Lucky break, I guess. When I removed the set screws, a few aluminum chips fell out, It seems as though as the gear semi-free spun on the shaft, the torque and vibration caused the space between the threads to fracture. I have polished the burrs off the shaft and the inside of the gear, remounted with red Locktite, and confirmed belt tension to the recommended harmonic frequency. I’ll let it sit for a day and see if this solved the problem. Steel (set screw) vs Aluminum (gear) seems like maybe not the most durable combination in this environment. Would a steel gear cause performance issues? Maybe there’s some hope of a modification when the opportunity arises. Hope so. Thank you for your post(s) I would have been wondering in the wrong place for a while until I discovered this. 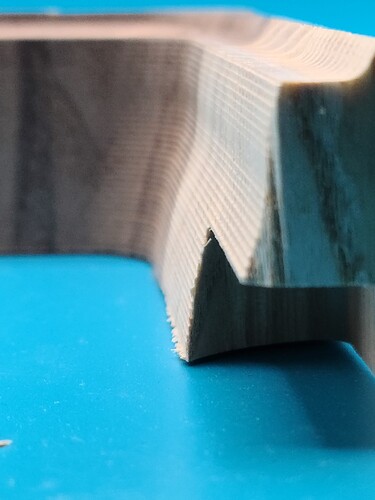 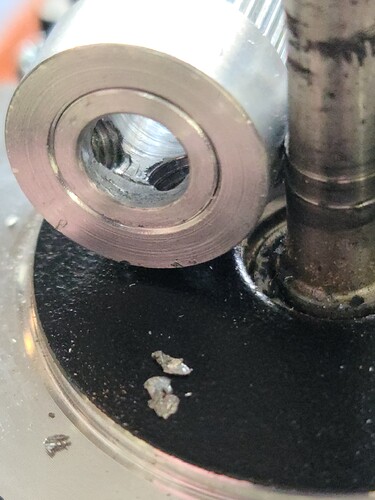 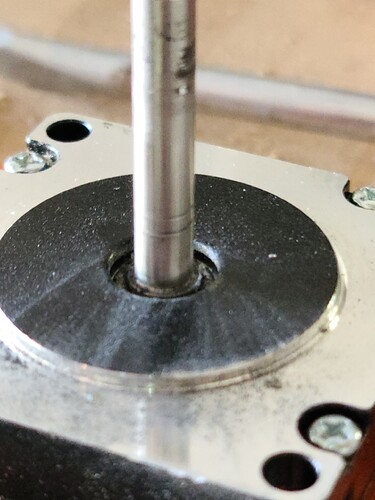 The set-screws should be threadlocked and one should be on the flat of the motor shaft, when installed like that they hold well. When not installed correctly they are a giant pain in the butt, score the shaft, chew the threads, wear the inside of the pulley etc.

From the look of your pulley I’d probably replace it with a new one, line up on the shaft flat and threadlock it into place properly.

Many replace the 3mm grub screw with a 3MM X 10MM Cap screw. The tiny grub screws are a double whammy. If you tighten it too tight the threads in the pulley can give or the head of the grub screw can strip. If either of these two things happen it is a pain to replace it. A cap screw has a much bigger head and therefore a bigger allen wrench to tighten eliminating the stripped grub screw head. You can still over tighten and strip the alum threads but when using an allen wrench never use the long side to tighten the bolt with unless it is over 8MM. Use the short side to tighten the bolt/grub screw and you are not likely to over torque the bolt. 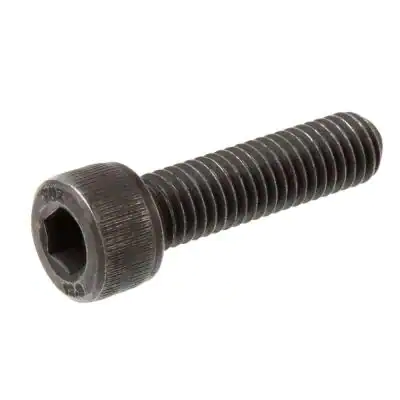 When ever possible does not use a ball end allen wrench on small screws. The ball works well on larger sizes for angled use but on small screws there is not much bearing surface on the screw and the small size can cause it to strip. 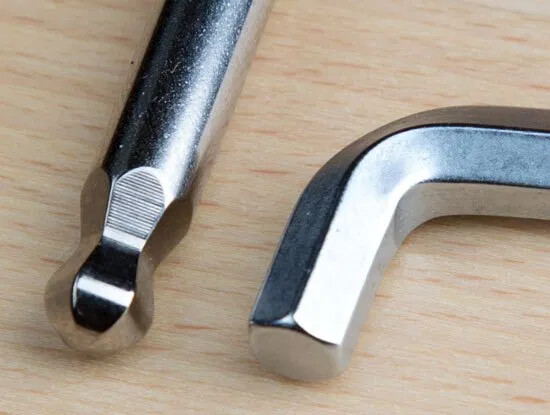 From the picture you can see that a straight allen wrench has much more contact on the head of the allen screw over a ball type.