Working 12mm PVC here, contour path in from
the left toward the right. Several passes had through-cut and left less than 2mm. Before this last pass the 3mm ball nose end mill had not yet touched the waste board, so there’s a mark where it travelled. As a result you can clearly see this bug happen.

End mill comes in from the left, X axis freezes briefly, just before the turn, and then the rest of the contour, and the rest of this whole job is off by about 7mm to the west.

End mill made it out of the right edge with brute force but then the next cut in the job was more of a crash since the whole machine was now shifted leftwards by about 7mm.

What caused this stutter? There aren’t any physical obstacles here. The path of travel is clearly inside the machine’s bounds.

Could it be ESD? Maybe because these two sort of large chunks of PVC are being split apart, and this was the final moment of the final cut? 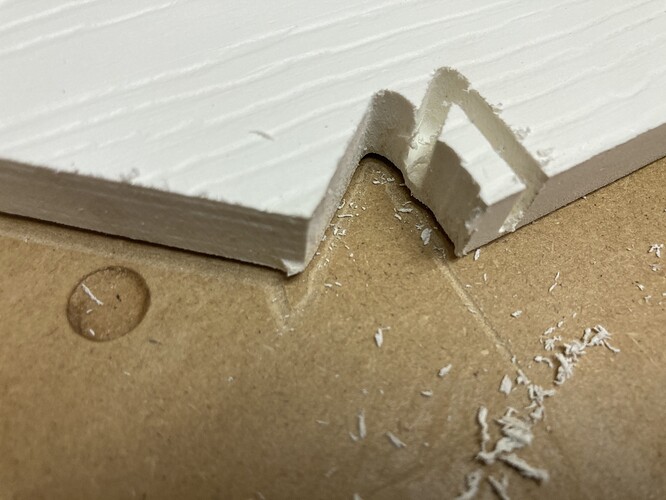 Here’s the .nc file being run here, in case it helps.

What Shapeoko model do you have?
This looks like lost steps on X axis, which is usually an indication of either excessive force on the axis at some point due to obstacles (not the case here apparently), or the X pulley slipping on the X motor shaft due to a semi-loose or not properly aligned setscrew. Did you double-check the X pulley setscrews ? Sometimes they can be just so that it won’t slip all the time, but pseudo-randomly it will slip and catch again (which will look like “stutter” then)

This is the SO3 XL. That makes sense. Will closely examine the X pulley, belt and set screw etc. Here’s a version of the image with annotations, in case the original was confusing. Sounds like this has to be a physical problem and could NOT be a signal problem or related to static, interference` etc.? 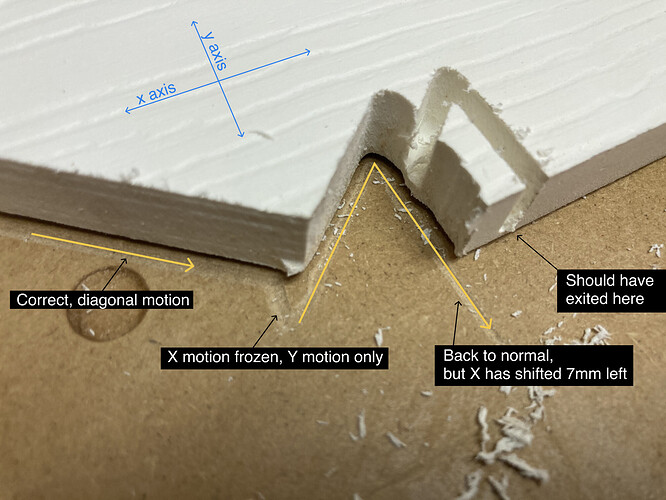 Thanks for the additional info. Such a temporary shift along the X axis only is typical of slipping pulleys. It is not technically impossible that this would happen due to a non-mechanical issue (e.g. an X value in the G-code getting corrupted as it’s being sent to the controller), but statistically it’s orders of magnitude less likely.

Make sure both setscrews are present, one of them is aligned to the flat on the stepper motor shaft, and both are tight.

I’d also inspect the belts for a stretched area, broken fibers that could lead to a skip. This type of issue would be location specific. Can you shift the job a couple of inches and see if the issue repeats at the same point in the program or the same axis location?

So have inspected belts and screws. From what I can tell seems like this is just an issue of going too deep and/or too fast. The fact that it happened at the moment of the final cut-through just had to do with the stock being loose and vibrating, pushing the X belt/pulley past its limit. That’s my best guess.