I have to put 1600 0.3mm holes in the bottom of 6mm pockets for a vacuum table made of aluminum.

Could someone please share or help me figure out the right parameters? I’m afraid the endmill will not forgive mistakes

No, it won’t forgive any error in feeds, speeds, or plunge rate.

0.3mm is the diameter? Is using a smaller endmill an option?

Which alloy is the aluminum?

Which CAD/CAM tool are you using? Is an adaptive/trochoidal toolpath an option?

The diameter of the hole is 0.3, but can be increased to 0.33 i guess. The bigger, the more vac i loose at uncovered holes. With 1600 holes it adds up quickly.

I’d rather increase the hole dia than decrease the tool further if that works too.

Depth is 1mm but im flexible and could increase the depth of the pockets to around 4.5 which would leave 0.5 for the 0.3mm holes.

I just wrote the seller asking for the alloy.

I’m using fusion, then CM.
Adaptive i use quite a bit…in this case I thougt going straight down would be better though to avoid side forces. Wrong?

Would it be better to use a drill?

A drill would be better if you can find one which works at the speeds the spindle runs at (most are made for low hundreds of RPM) — there are specialty drill-mills which are made for high-speed spindles, but they’re pricey — I believe Harvey has one.

I just got a resply from the seller.
They are selling AL99,5 medium hardness or Almg1.
He couldn’t tell which of the two mine exactly was.

Unfortunately I can’t find a drill for this speed

As i write another opinion came to my mind. If i use a 90° v bit, i could slightly puncture the pockets.

I’d really appreciate if you could tell me which way you’d prefer.

A V endmill is likely to be even more delicate, unless it has a rounded tip, but that might work, though I’m not sure how clean of a hole it would yield at the bottom.

One company which I know deals in tooling this size is Precise Bits:

@TDA from their sometimes chimes in and might have advice.

The pcb drills might just be the ticket here. You won’t get through all 1600 holes with a single tool but they are dirt cheap so maybe it doesn’t matter if you break a few.

I used the standard aluminum fusion recipe for 0.7mm drill. Did a 5x5 grid and went 3mm deep. Came out beautifully.

Tried the same with a 0.3 and it snapped on the first hole. In hindsight, 3mm depth was kind of dumb to test with but you live and you learn.

Anyway, grab a bunch of the pcb drills and give 'em a shot. That’s my recommendation anyway. 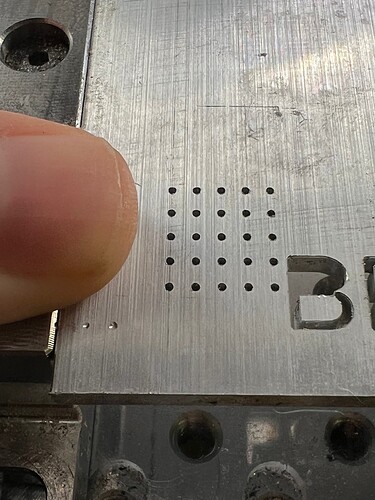 I’ll give it a try, thanks for the idea Tyler and thanks for your help Will!

TDA from their sometimes chimes in and might have advice.

Usual preface, I’m with PreciseBits so while I try to only post general information take everything I say with the understanding that I have a bias.

The pcb drills might just be the ticket here.

A couple things I would add in general though. At this size the most important thing is going to be runout. Old rule of thumb is 10% of the diameter of the tool will break a cutter. This was mainly applied to milling but has the same or worse implication for drilling. Drills REALLY don’t like side load and any runout will functionally be a feed.

A drill would be better if you can find one which works at the speeds the spindle runs at (most are made for low hundreds of RPM) — there are specialty drill-mills which are made for high-speed spindles, but they’re pricey — I believe Harvey has one.

At this size this really isn’t that much of a concern. Even at 100SFM this size drill would be good up to 32KRPM. Bigger issue is plunging it reliably and fast enough for the material.

They are selling AL99,5 medium hardness or Almg1.
He couldn’t tell which of the two mine exactly was.

Both of those are pretty similar with AlMg1 (5005) being easier to machine. Both want high feeds and the higher the temper the better as the machinability goes up (for these alloys). In the case of either you are probably going to have to have a cutting fluid. Normally I’d recommend an oil based one but for this I’d say get the thinnest one you can as actually getting the fluid into the cut is going to be much more important than anything else. I’d also limit my cutting depth to the 0.5mm you indicated you could go to.

One last thing I’d look at is limiting the length of cut on the drills you get. The shorter it is still being able to clear your hole the better. If you can find them, medical / needle drills will buy you some more forgiveness. They have much more core material and usually have shorter cutting lengths than PCB drills.

Hope that’s helpful. If there’s anything I can expand on or help with let me know.

Could you please get me into the ballpark regarding plunge rate?