I was finishing up (a slightly modified version) of the tool holder tutorial piece last night when something went awry and my 1/8" bit broke during a profiling cut. If you take a look at the picture you can see why I initially thought that there was an issue with the g code which caused it to suddenly plunge down too deep and then as it rounded the corner, the bit snapped. I reviewed the g code and it looked ok, so I went back and loosened the collet to find only about 1/4" of the bit left. I know the collet was tight for sure because I needed wrenches to loosen it. Also, I am positive that I left way more bit in the collet to start-- I am always very conservative when it comes to this and left out only what was necessary to attach the probe clip above the flutes. The feedrate was 50ipm and it was a 2 flute 1/8" flat endmill. The router dial was around 4.5. I’m hoping this was an issue with RPM/feedrate rather than the collet…

RPM and feedrate seem about right though (if anything, they are conservative, 50 ipm using 25K RPM @ 2 flute is 0.001" chipload, which is at the lower end of the chipload range for wood)

It really looks like the endmill slipped in the collet, and was pulled into the cut, I cannot see another reason why the cut would get deeper all of a sudden (assuming a correct g-code). I imagine that when it snapped, the remaining part of the shaft could have have locked itself in the collet due to the forces at that time, hence required wrenches to remove the collet afterwards ?

Maybe measure the shank of that broken 2-flute with a caliper and check that it is actually 1/8’’ and not slightly smaller ?

Checked the bit and it was spot on… 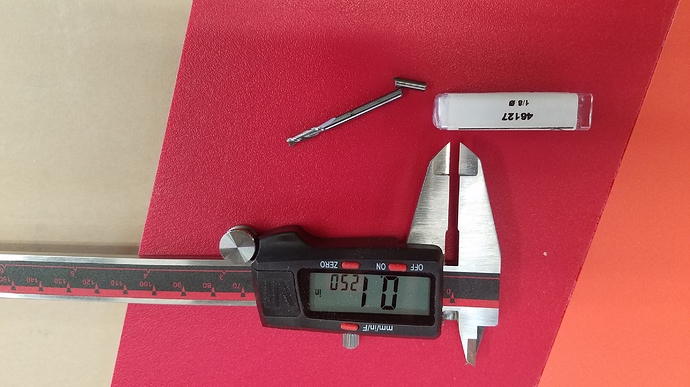 I’m wondering if the bit was not sitting in the collet properly, maybe because you did not clean the collet holder.

I noticed that sawdust/chips will get stuck in the collet. I’ve been tapping on mine, when it’s empty, to shake out the dust in between tool changes. Was the collet and holder clean?

I actually noticed that there was a bunch of dust and chips in the collet when I removed the 1/4" collet for the tool change. I did tap it out and didn’t notice anything when I removed the stub from the broken bit… I’ll definitely pay attention to this in any case moving forward.

Since the bit slipped before it broke, there was plenty left to load it up and retry. I was able to finish the cut and had no issues. For now, I’ll chalk this one up to a dirty collet or that something interfered with setting the bit properly and hope it doesn’t happen again.

Thanks for everyone’s feedback!

for most cuts in wood, your router should be on 1 , 2 at the max. rpm vs cutter size is counter intuitive, smaller cutters require more rpm. it does sound like the cutter was pulled into the cut, and as it extended from the collet probably chattered then broke. you can safely double feed rates in create. A rule of thumb is depth of cut = 1/2 diameter of bit feeds in wood should be 60 to 140 ipm. watch for nice circular chips, rather than dust. start in motion at 40% under and increase until cut sounds good and produces chips

I had a 1/4" Endmill slip after 95.7% of the program was finished. I am definitely torquing down more after this. 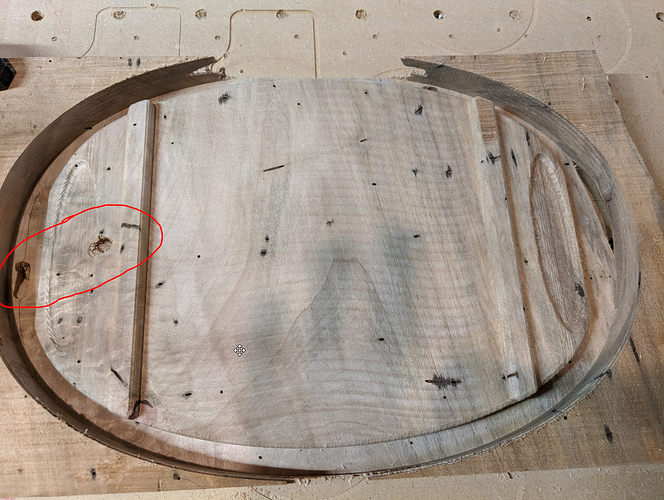 Are you sure it was the endmill? Probably more likely to be a Z axis issue.

Are you sure it was the endmill? Probably more likely to be a Z axis issue.

Hmmm, I’ve been running the machine since with no issues. Just really tightening the bit now.
The bit was loose when I stopped it.
I know this doesn’t make sense, but it’s like my collet doesn’t tighten up like it used to. The collet used to hold the bit by just snugging up on the collet nut by hand. Just until I grabbed the wrench to tighten it properly. Now the bit slips with a hand snugging of the nut. I have to really turn it by hand to get it not to slip. I’ve cleaned the collet, nut and taper.

Makita collets are simpler mechanically and don’t have the greater clamping range, so ought not wear ought as quickly, but it is possible.

If you are using the stock collet, I’d recommend getting a precision collet — it’s a huge improvement in cut quality. If you’re having difficulty with a precision collet (Elaire, Precise Bits, Carbide 3D), contact the vendor and see what they say.