Struck gold at the scrapyard and scored a 15x15 .625" thick piece of 6061 aluminum. Making a new wasteboard. I’ve got 294 blind holes to thread. So far, doing this my hand (with a chinesium tap, which doesn’t help). I’m hesitant to use a machine tap in a drill with all these holes being blind, am I being overly cautious?

IMO it depends on your level on machining/CNC/CAM experience. I often use my machine to drill and thread mill holes (not tap).

Thread milling not in the cards this time around (.155" holes, kinda small - not impossible, just not worth a special milling tool…yet anyway)

Sounds like a job fir a tapping head. Mine doesn’t get a lot of use, but is worth its weight in gold when I have a job like this.

I wish. I guess if it’s any consolation, happens that I learned how to use acid to remove a broken hand tap today…

Any specific reason why you’re doing blind holes and not thru?

So much fun. Nitric? (most effective, least damage to the aluminum, but nasty)

Mix of nitric and sulphuric (sold as concrete “cleaner”) - but I had it on had. Working ok. It’s MN though, so keeping the material warm enough to get anywhere is taking some babysitting. It’s slow.

I wanted to use it as a “supplemental” wasteboard on top of my MDF boards for some metalwork, so didn’t want coolant/liquids leaking through the open holes. Maybe not a great reason, but it’s what I was thinking. I’m now thinking it would maybe be just fine to use a sheet of .020" aluminum underneath it instead. 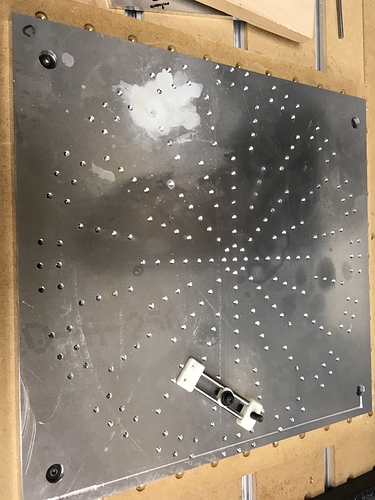 Chinesium has very strange material properties, kinda like peanut brittle, crunchy and you can’t get it off your teeth with anything less than a chisel. Good luck!

Best just delivered directly to the fnck-it bucket. I’ve got 3/8" of it out of there so far…not much more than another eighth or so jammed in there. I hope.

I like the layout you’ve done. Different than most rectangular layouts we usually see, but I bet it’ll work great. You mentioned using acid to remove the broken tap, share the secret?

Edit: I just read above about the secret sauce, don’t know how I missed it before (maybe the 2800 miles I drove during Christmas made me a little brain dead).

If you are still dismembering it with the acid, you might want to flush with clean water and a little detergent using a needle, followed by clean water, and then an acetone flush. Any oil residue will really slow things down, and, even if you cleaned before, might not have made it to the bottom.

As to the tap, you can get good ones and crap ones from pretty much anywhere. The consumer grade, like sold at the box stores, are almost always crummy. I don;t know what grind you were using, but it sounds like you were using a general purpose tap, which will not have great performance on any material. For Al, blind, I use a chip lifting tap if I can, but I try to avoid blind tapping if I can, to the point of through tapping and plugging in some cases. Then I use a spiral point (“gun”) tap and no worries.

A somewhat dilute commercial nitric acid solution— commercial is about 68%, diluted down to about 50%— will pretty much passivate aluminum and go after the ferrite at the grain boundaries in the tool steel, IIRC. Too weak a solution will not passivate the aluminum and there may be some etching. The chemistry here is really cool, and not fully understood.

You can get commercial solutions for this, but it is, in my experience, easier and cheaper to go to a shop with an EDM (tap burner/stud burner) as I no longer keep nitric on hand.

I was thinking EDM, but not too many folks have those in their garage, but a good machine shop should. The last one I used was about 25 years ago and painfully slow, like watching grass grow, but it works well.

I kept track of which holes I was using in a square layout, and it turned out they were in an arc across the part of the board nearest the “bottom” edge. I was trying to come up with a pattern that didn’t “fully” populate the board because I didn’t want to tap that many holes but put them in the places I was using them. I guess I’ll see if I made some good tradeoffs

The tap was an one I had around out of a kit. I know better. After the first 10-15 holes went ok I should have stopped.

After breaking that one, I switched to one of these ($12)

I hand tapped with both to compare. They’re both bottoming taps. I found the Guhring to be easier to use, aligned easier, less torque - the shorter length of the cutting thread (about 5 threads) meant a bit less torque required, which added up by hole 150 or so. The cheaper one did a fine job using the same methods, just more friction (it has 10 or so threads). I used liquid Boelube with both (seemed to behave a little better than kroil and anchorlube, and I still have half a gallon of it to use up). I think next time I do something like this, I’ll seek out these machine taps again, they self clear chips nicely, which the hand taps don’t. With the hand tap, needed to pull it out of each hole at least twice to clear chips but with these I could do each hole in one go.

No damage to the aluminum so far (but it did clean the area on the surface really well). I’ve “extracted” about 3/8" of it so far… about 7 drops fit in the hole at this point. I’m getting close to the tip of the tap, but whats left is still fully fluted, engaged in the threads, and stuck tight. It goes faster when I’m standing next to it to do the cycle quickly and keep it warm with a torch, and a lot slower when I leave it an hour or two before coming back to it

I did stick the files up on CutRocket if anyone wants them.

That Guhring is the ticket. Lifts the chips out. Still can jam up when used by hand, but nothing like a straight flute hand tap. As for power tapping: No guts? Without a machining center (for positive depth and rotation) or a tapping head, I wouldn’t power tap those blind holes. I might do 2 or 3, but more than that it is pretty much a forgone conclusion that I’ll mess up and jam the tap at some point.

Just take care with the acid.

As another option in the future, if you can find or make an appropriate insert, you might consider boring the location oversize with an annular tool (similar to a plug-cutter for wood work). For a one-off in aluminum, you can make one from a piece of steel tubing. Then put in an insert with thread locker. The cut-out can be all-through, with the insert blind tapped. Bring the back a little below flush and deck the top in the machine.