3/4" diameter cutter in MDF with Shapeoko 3

Can you share what you’ve done in the way of belt tensioning?

In addition to @jepho’s (future) input, here’s a thread describing a process to set belt tension in a “scientific” way

A post about belt tension, how to measure it, what effect it has and why you need to manage belt tension in order to usefully calibrate and square the machine. As usual, no criticism of the machine here, in fact some quite clever design choices seem to have been made. The question of drive belt tension has been bugging me. How much you should have, how to check it and how it affects machine performance. I failed to find any quantitative data to use, so I went and started measuring; and found t…

The “belt tone” method boils down to downloading the Gates app on your phone, move the gantry to one side, insert a 1/4" dowel under the middle of the belt, pluck it, adjust tension until reading ~100 to 120Hz

What’s important beyond absolute belt tension value is to ensure equal tension on the left and right Y belts.

It’s mostly about limiting cutting forces to be suitable for the rigidity of the machine so taking more cuts per second works out getting more material removed before hitting the machine limits, even if it might be a bit faster than recommended for the cutter.

I am pretty tickled with the way the polystyrene foam cuts on the machine and will surely be using it to do some lost-foam aluminum casting in the future.

Go on, you know you want one of these to really tune the belts properly Have you tried a guitar tuner app to see if it’s any less temperamental?

I used the vibration one in my experiment here: 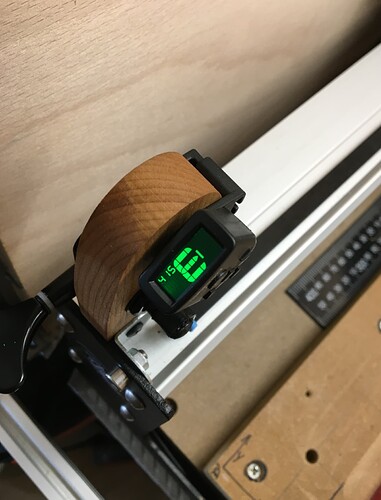 I have three clip-on vibration tuners, one on a baroque lute, one on an acoustic guitar and a third on an electric. All are pretty much spot on.

(edit: this tuner is using A=415 because it’s used for baroque tuning which is a semitone lower than current A440)

(edit: the point was that if you clip a tuner on to the endplates it will almost certainly give you a reading if you pluck the belt)

I think it’s likely the hollow aluminium will resonate properly, just like an aluminium bass.

If you clipped it to your Canadian sharpie-maple “bridge” then that would certainly pick up the vibrations.

I had no idea ebony was available at that sort of price, I assumed you needed to be Pablo Escobar to afford any reasonable amount.

As for belt tension, there’s an updated table in this post

The simple summary is that I did not find any reason to believe that there was any reduction in backlash or vibration with higher belt tensions once the minimum working tension is achieved. I was not able to get the rating data for the Shapeoko steppers but pretty much all of the steppers in this size range have a load limit which is pretty close to the minimum tension, after that the shafts will eventually work harden and fracture.

The minimum (and maximum) tension is set by the stepper max torque, both sides of the belt need to stay in tension, that’s about 18lbs which comes out around 80N.

No no, it’s fine. The CA-50 you chose is one of a long line of very good Korg tuners.

Great! Thank you very much for this gargantuan work, Liam. I have just read through it again. I would buy the book and give it a prominent place in my CNC library.

The simple summary is that I did not find any reason to believe that there was any reduction in backlash or vibration with higher belt tensions once the minimum working tension is achieved.

That’s a very interesting finding. The arithmetic is a bit beyond me and it is a rather counter-intuitive conclusion. I would have expected that as the tension increases, the tendency to vibrate or deflect or highlight the inherent backlash would be reduced.

Indeed, and counter-intuitive is when work gets interesting

I didn’t have a good argument either way when I started measuring and building up the simplified model.

Basically the excess tension forces on each side of the moving axis balance out to zero as the belt pulls between the anchor points. If this wasn’t the case the stepper motor would have rather a hard job moving the axis at all. Things don’t improve with extra tension because the belt forces increase linearly with extension, there’s no rising rate until you’re well beyond the forces a Shapeoko belt clip or stepper can handle and the belts wouldn’t last long either.

If we were trying to hold the axis up with the belt as well then more overall tension would help, but we’re not, the axis wheels or rails do that and we’re only interested in the extra force required to deflect this point on the belt.

I understand nothing of metallurgy. Do you know anything about the number of cycles the shafts will tolerate before fracture? is it correct to state that the work hardening would be negatively impacted by increased belt tension? This would make the argument for having the belts in as relaxed a state as possible, commensurate with accurate movement.

The updated Range of Belt Tension table was very welcome. Keeping between 110 and 150Hz looks to be ideal for my standard sized SO3 machine. I also suspect that when combined with the Z plus, the fixture tooling plate and the modular vices, I possibly have obtained (by serendipity) the very best combination of features and rigidity set against its price, for the SO3 series.

I’m also somewhat weak on metallurgy but we have seen quite a few people on the forum here have snapped motor shafts after cranking on the belt tension. It’s a wearout type failure as it happens as the shaft flexes under belt forces with rotation of the stepper.

So, yes, as you say, the least belt tension required to react motor forces and that seems to be about 80-100N.

That awkward moment when you’re supposed to be at the more geeky end of the Shapeoko users spectrum, and folks out-geek you by a significant margin while discussing belt tension. C’mon, if it goes “twang” it’s probably fine, isn’t it ?

The belt tensioning theory / mods are an interesting topic. I will have to mess with at some point when I have time. I do have a decent Boss guitar tuner that may come in handy.

Lost foam casting will be a good fall/winter activity. Too hot out right now. I’ve been saving my decent-sized scrap / skeleton pieces of blue foam (where I’ve been experimenting with it on the machine) so they can become sprues.

Machine and workholding rigidity definitely make a big difference as you noted. I come from more of a metalworking background where things get cranked down on in vises, chucks, step clamps, or bolted into a fixture. It’s been interesting playing with foam that is only taped down with masking tape.

It looks like you’re doing a great job with your machine. Keep up the experimentation and tuning.

I haven’t done any casting in a while. I have a bunch of used oil saved up for the oil burner. And some Litex wall texture mix that I need to try using as coating on the foam (supposed to help the dry sand that it’s buried in from embedding in the surface of the casting). One fun thing you can do with lost foam is embed steel fasteners or other elements in it to make knobs, handwheels or pulleys with steel hubs, etc.

Mildly related, since it’s another design containing troughs, here’s a toothbrush holder I did in lost foam. Pattern was hand cut using a 1:1 dxf printed out and glued to the foam. It was supposed to be 4 troughs, but the end one didn’t fill, so I lopped it off. Need to take it back off the wall some day and smooth it out more and maybe powdercoat. Kinda like the blasted aluminum look, though. 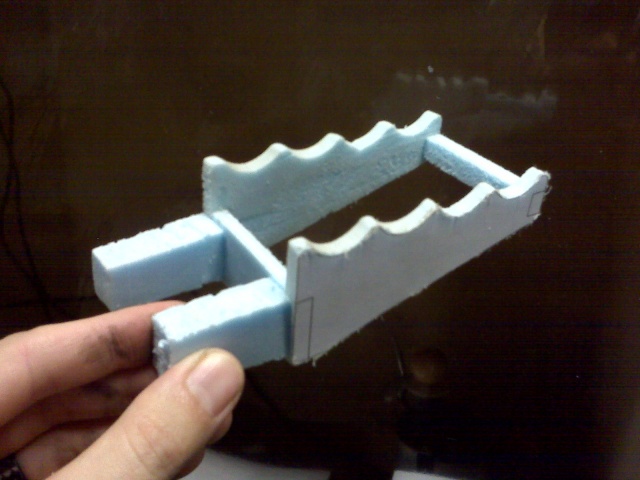 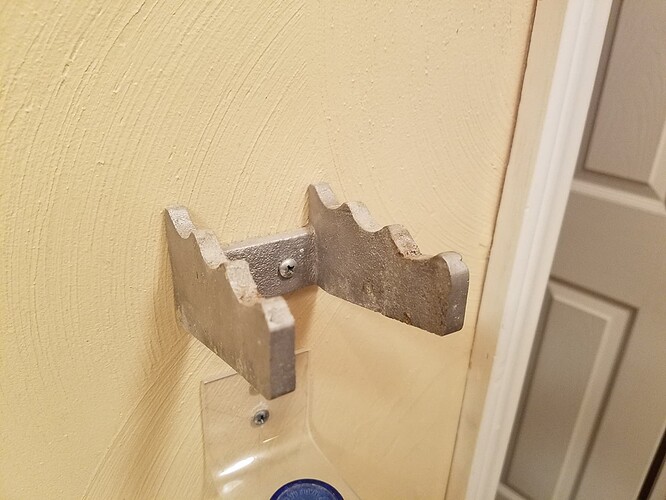 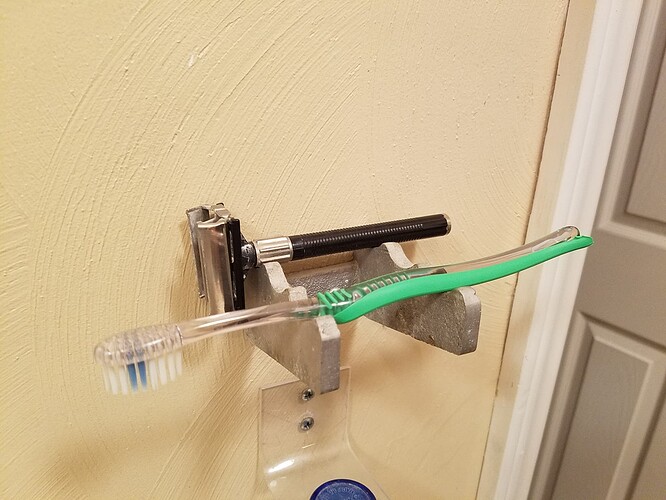 Slightly more back on topic, I ordered a dust cyclone for my Shapeoko for MDF and other cutting. I have one on my blast cabinet (a converted 250-gallon oil tank) and thought about just moving that one back and forth, but for as cheap as they are, it’s not worth the hassle.

Pics of blast cabinet here in case anyone needs a welding / fab project:

folks out-geek you by a significant margin while discussing belt tension.

I’ve got a bunch of Pi Picos laying around. @jepho, Maybe we could do this with your tensioners?

I wonder if it would be helpful to have a belt tensioner that would be similar to a guitar tuning peg/machine. Something where the belt wraps around a worm-gear driven cylinder. The goal would be to keep the effective length of belt constant independent of tension. You could either have a belt with one fixed end and the other end goes straight to the tuner or use an idler bearing (like the ones already on the Shapeoko) to act like the headstock nut on a guitar.

The motocross rider in me immediately thought the first foam picture was a foot peg for an off road bike. I still like it as a holder though.

I don’t use Fusion but I suspect that machining a 2.5D project should be within my current skill set. Do you have a list/drawing of the parts and their dimensions which I need to work to?

I have the Fusion models (posted here somewhere too) Were you going to do the CAM in Fusion?
I might would redesign if I were to use aluminum. Those were designed for 3D printing.

Those were designed for 3D printing

Are they available somewhere for others to download and print?

Are they available somewhere for others to download and print

@opticrest I just threw these up on Thingiverse. I had to make a modification for my old school front plate with the dual M3 belt tensioner mounts (if you never had those, you don’t know how good you had it with the M5 version).