I have been making boxes for several people and so far I have got several made. A few weeks ago I showed one of my neighbors one of the earlier boxes and he said he wanted three for his grand daughters. I passed by another neighbor today and saw him there and stopped to ask him the names of the children. He told me Carly, Cameron and Jesse. So to make sure I asked him to spell the names because customized boxes are of no value at all if they are spelled wrong. He thought a few minutes and was not sure how to correctly spell their names. Oh those senior moments. He just said put a design on each box and skip the names. (Sigh)

Anyway enjoy the boxes. The boxes are based on a design of a man named John Clark on youtube.com. He has some very good instructional videos about box making and v carving.

There are 4 boxes, I opened one to show the lower half of the box. The material is Red Oak made from a 4/4 board. The inner pockets top and bottom are .75" with a .25" lip around the outside. The one with the horse and “Tony” was chamfered with a 45 degree bit on all12 corners. Two are finished with Watco Danish Oil and two have Dewaxed Shellac and a couple coats of wipe on poly.

FYI I have a very slow internet connection so I take the pictures from my phone and edit them in Adobe Lightroom. I crop the picture and adjust the orientation. This speeds up the upload, plus you dont want to see the boring background around the boxes. 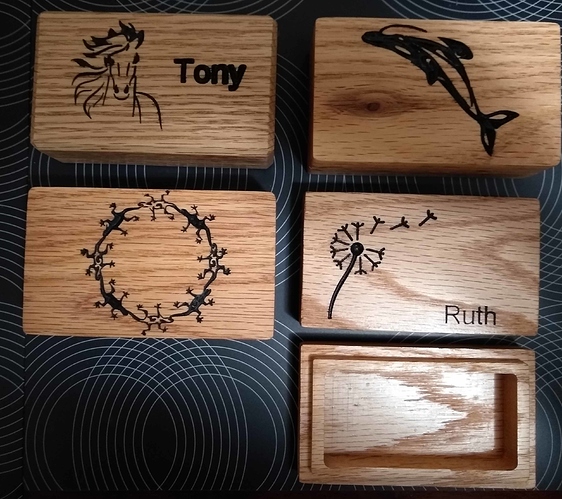