I’ve been wanting to make some wands on my S3, but I want them to have an actual core (like in harry potter) so a lathe won’t work. I need to get more pictures of the process, but it breaks down to
get a 2x2 turning blank.
cut it in half on the bandsaw
chisel out a small cavity and embed (with glue) whatever I want the core to be (in this wand it’s a bit of ethernet cable)
glue and clamp the board back together
use the 3d printed jig to center and hold the blank in the Shapeoko
two sided mill in meshcam.

I’m making a video of the whole process that I’ll post up here, but so far it seems to be working great. The glue line is pretty evident until I stain the wood, but once stained it disappears very nicely. 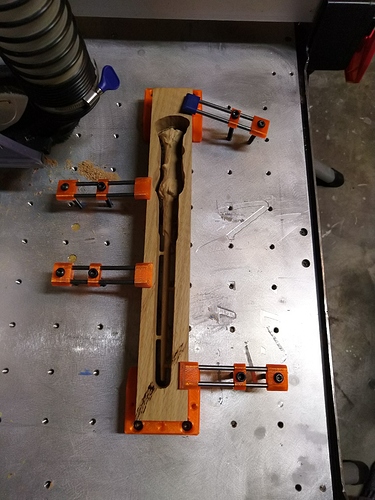 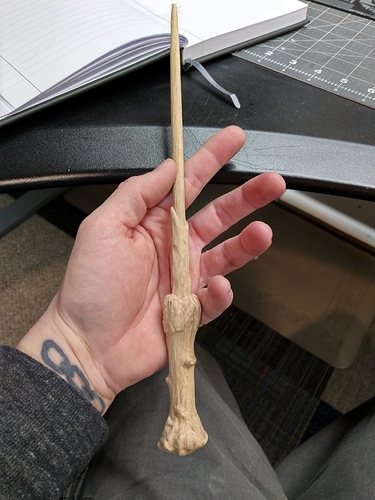 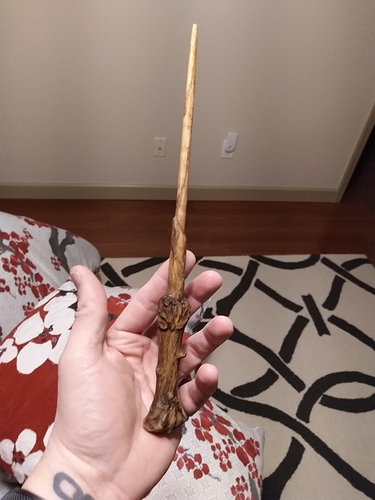 That’s pretty cool!! If you don’t mind me asking, why the ethernet cable? Is it a dowsing rod for finding hidden databases?

forgot to mention that, my bad . I’m reading the books to my kids and we tried to think of things that are almost magic today to replace the phoenix feathers and dragon heart strings as magical items from the books. ethernet was for the internet, because I mean the internet is magic though if I do another one I’ll use fiber optic cable. We also came up with electricity (copper wire) , computers (various electronic bits and bobs), cell phones (a broken up sim card) and cars (still dont have a good idea for this one).

I sometimes try to picture Henry Ford, or some other early automotive person at a young age sitting in a modern car, or the Wright brothers taking a seat in the cockpit of an A380 or 787, or explaining your home satellite dish to Nikola Tesla, or the transmitting satellite itself to Robert Goddard. The rate at which these sciences have expanded in even 100 years in itself seems like magic to me. Heck my grown kids had to explain to me just last year that Pluto was no longer The Ninth Planet, haha!!

Looks great!! Did you design and print those clamps too?

Yeah. They are my take on the oops clamps. I purchased a set of those originally but the 3d printed bits had some strength issues, so while I was designing replacements I just went all out and designed a different setup entirely. Mine are printed in PETG, use 3/8 steel dowel rods from home depot and an M6 nut on the back clamp for the leveling screw instead of threading the plastic.
having said that, I like the oops clamps a lot and feel they are worth the money.

Just saw your IG post and the wands are looking awesome, are you still using meshcam? I’d love to know your process, did you find an stl of the wands or draw them up yourself?

too funny, I just finished another one a few minutes ago! I found a source for the wands that pottermore generates so I’m working my way through the families accounts.

I’m making a video on the process and still use meshcam though I’m eyeing vcarve. Just hard to invest the time to try it out now that I have a workflow.

Tonights wand is a copper wire core cut out of red oak from my pottermore account. 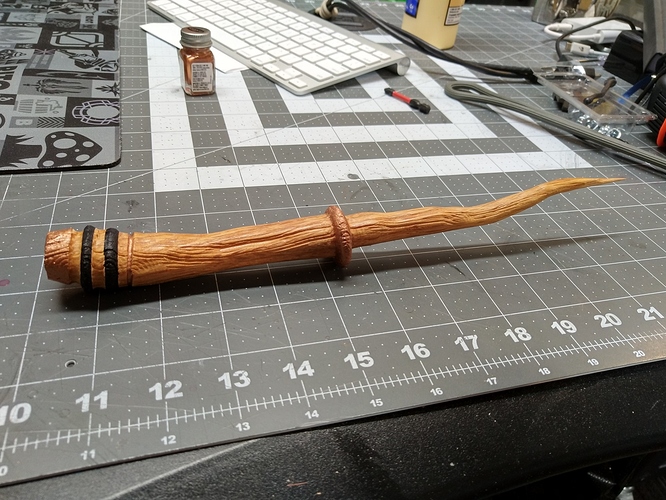