The Vise Channel Blocks -
In that picture I used HDPE that was 1/2" thick and 28.65mm wide to fit the Vise channel as tightly as possible.
The correct dimension for the blocks is “Snug”

The lower in the vise the better, so thinner material would be better, 3/8" is good.

Regarding the vise jaws pushing against the stock or the blocks-

Ive tried it both ways and it depends on the job; the thickness of the material; the amount of material being removed.
When you remove a lot of material, the stock will bend in between the jaws and the work can shift.

The reason why the flip frame works so well is because of its frame structure, so tryto keep a frame around your material, the hammer handle for example:
http://community.carbide3d.com/uploads/default/original/1X/fbb9c93f67713f8728eebd59f6f8f5fbac02455f.jpg

I would use the stock to clamp against to start and not the blocks.

Thanks for the info!

so you get a really smooth finish?

The Surface finish on that Brass Rocket was more a result of a 30% step-over not the diameter of the tool.
For a smooth finish I should have used a 10% (.006) step-over.

The problem with using smaller diameter cutter’s is the reduced flute length they offer.
Unless the part has very shallow elevation changes, the 1/32" wont have the ability to reach the necessary maximum depth. 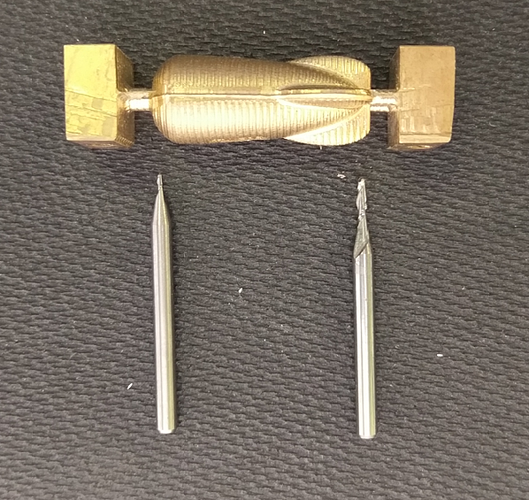 Thanks Apollo I plan to make a 1/48 scale cannon the full depth would be 7mm. Machined both sides with a depth of 4mm probably.

Regarding your modification to the vise, did you tap the holes to do all the way through or are they closed-end holes. Also, is there a reason you chose not to drill the second anchoring point on the part of the vice that screws down vs the part that moves?

Apollo and Carbide3d parted ways some time ago. I, for one, miss him.