Yep, that’s what I gathered too. I thought the 40k RPM spindle sounded most appealing.

Here are the prices I heard back with from them:

All in all, 60k RPM is pricey but 40k seems to not be too bad. I may just settle with a 30k spindle, which is better than the 24k spindle most people get.

Did you ask about shipping costs? - Alibaba’s estimates are ~$500 to California!

Here’s some charts to help with speed, power, and collet size tradeoffs given the 20 lbf force and 200 IPM feed rate Shapeoko3 limitations. Also note that all of these spindles are significantly heavier than the trim routers. Mr. Beaver did a lot to adapt his “Monster” (yet incredibly light weight!) 5.5 kg “2.2 kW” spindle.
The charts are in order of decreasing material removal rate (MMR) and assume that the unit power for aluminum is 159 Watts per cubic inches/min. Chip-loads are all 0.0015"/flute for the maximum MMRs. Remember that the “1.25 HP” trim routers are likely only capable of 400 - 500 Watts cutting power. 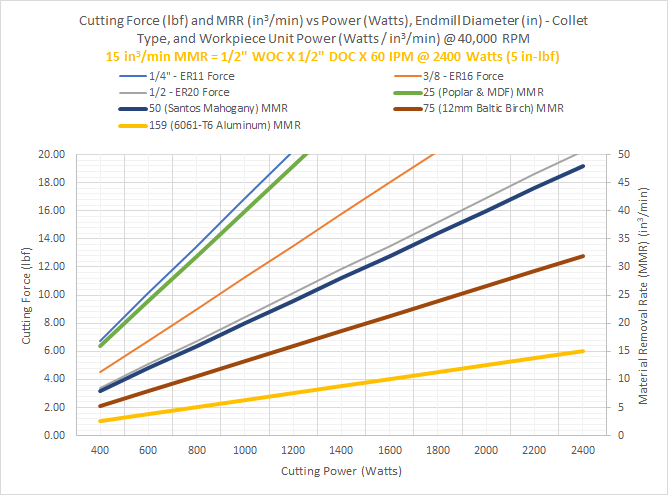 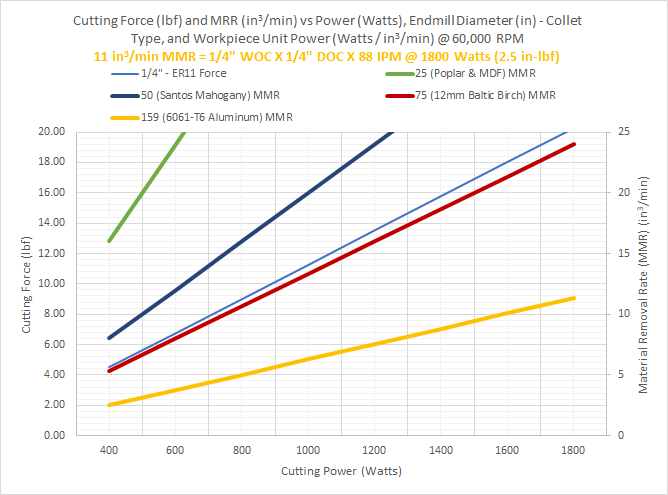 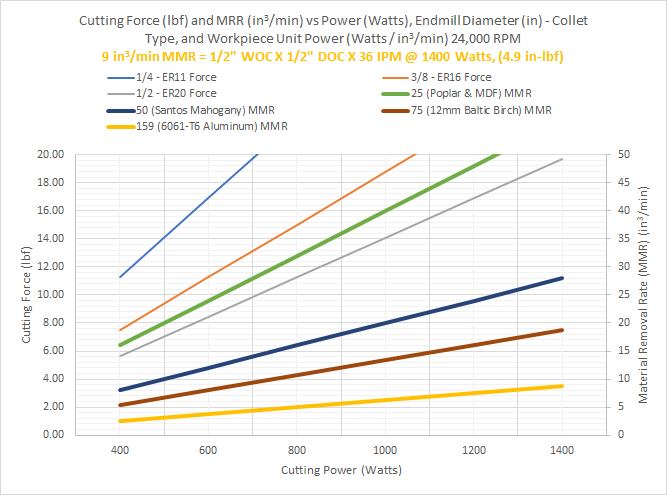 I am asking about shipping right now.

Wow, that is some excellent info to know. I will want to stick to er16 or smaller for my own uses, that helps increase cutting forces.

So even if I go for the 1000 watt or 1500watt versions, it’s still way more capable than a trim router if I can match or exceed RPM range.

Hmmmm, seems the OP’s topic has been kinda hijacked.

Isn’t that better than letting it close?

Probably, I’ve learned a lot from everyone’s comments, thread is permanently bookmarked for me.
I’m just hoping to hear back from the OP on his experiences as I still haven’t seen any compelling reasons for me, personally, to use anything much bigger.

You should want to decrease cutting force, not increase it! Increasing speed and cutter size helps do that. Anyway, before seeing this video, I was looking at this 1100 Watt TeknoMotor spindle. Based on its performance curves, its capable of 1100 Watts cutting power from 18,000 - 24,000 RPM and it comes with a precision balanced ER20 collet nut and wrench. Based on Jianken performance curves, their “1500 Watt” constant torque JGD ER16 spindle is likely only capable of ~1300 Watts of cutting power at it’s maximum speed (40,000 RPM) for the one you’re likely considering.

The TeknoMotor spindle uses an electric fan for cooling and the Jianken spindle uses water. This video shows that, at 24000 RPM, Kress and Suhner routers as well as the Elte and Mechatron HF Spindles, which also have internal shaft driven fans (all routers do), are about 20dBA louder than the Mechatron water cooled and HSD electric fan cooled HF Spindles. A 20dBA reduction would be perceived as 1/4 as loud.

The VFDs for both spindles require a ~220V 15 Amp service. The TeknoMotor spindle weighs 4.3kg (about twice as much as the Dewalt) and the Jianken weighs 6 kg. The cylindrical Jianken’s mounting bracket would likely add significantly more weight than anything necessary to mount the rectangular TeknoMotor. Regardless, the added weight may be problematic for either option. Unlike the US distributer for TeknoMotor, which never provided the quote that I requested, the one in the Netherlands has been very responsive. The cost for a complete system setup, wired, tested, and delivered to California would be ~$1100.

Their “Standard Swiss precision” ER20 collets which are “recommended by TeknoMotor” are less expensive than the comparable “ultra-precison grade” collets from PreciseBits. [Section 8.6] of the TeknoMotor handbook stresses the importance of using precision collets, as does Vince (albeit indirectly).

Based on the following charts which compare the two options, the TeknoMotor is the better choice IMO. Its 18% decrease in MMR for Aluminum and hardwoods is more than offset by the its 57% increase in MMR for softwood and by its decreased weight. The convenience of effectively supporting standard router and CNC bits with 1/2" shanks is an added bonus. Both options offer MMRs more than twice that possible with the “1.25 HP” (400-500 Watt cutting power) trim routers, as well as much lower noise and much improved precision. 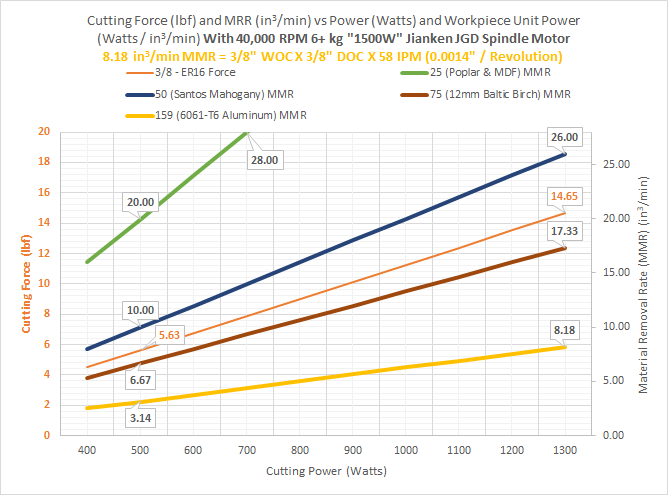 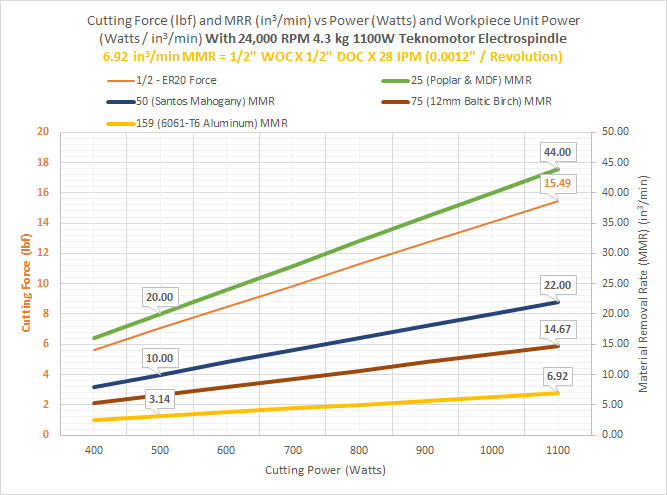 Have you heard back on shipping costs yet?

IMO, the 1000 Watt 60,000 RPM Jianken JGD water cooled spindle with an ER11 collet may well be the best choice for use on Shapeokos, especially for those milling Aluminum. It weighs only 7.3 lbs, so the standard Z axis should be compatible (even without stronger lift springs). It’s 62 mm diameter will fit in the Makita router mount (shim material may be required). Since it runs twice as fast as the Makita, it halves the cutting/machine forces or doubles the MRR. It’s low enough power that a transformer could be used to provide the 220 V required from standard 115 V circuits. But, endmills capable of 60,000 RPM have to be used. 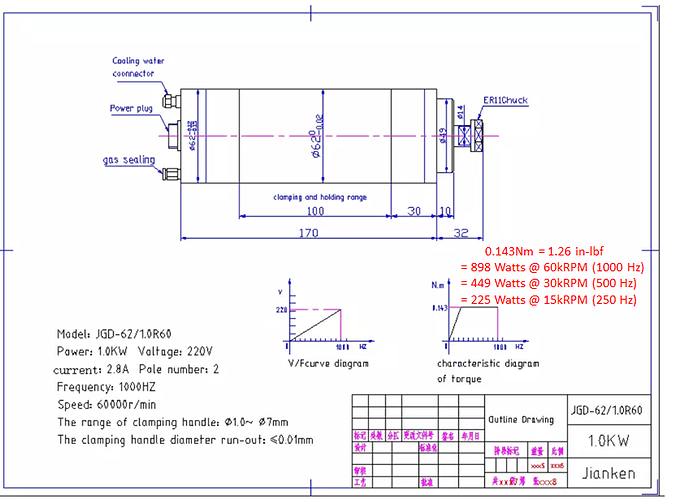 Here’s how it would and the 1500 Watt version would perform: 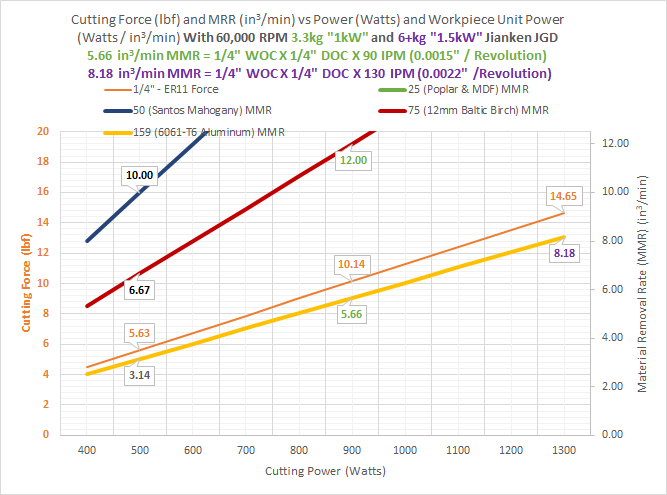 Here’s a useful calculator that makes the power and unit conversions easy.

Attention all shoppers, someone is selling a water cooled 2.2kW spindle for $300 on Inventable forum.

I am working on that. I asked a few questions and they got hung up on one I need to clarify but am traveling right now so it’ll be a few days until I can remedy it.

I’m curious to hear what you hear back Griff.

Oh, they have a version with an integrated tool changer now too:

Here’s some more details on that router.Kress Instruction Manual.pdf (314.1 KB)

Used to have a Kress 1050 FME-1 (from memory), when I lived in the UK. Sold it to @Luke when I left there though (thanks Brexit

IMO the ~$300 AMB 1050 FME-P would be a huge step-up from the Dewalt and Makita routers. It has a precision ER16 collet and balanced nut, more power, and is lighter weight. As shown below, a one flute endmill might be required to get an adequate chip-load for 6061-T6 aluminum (0.001" according to @Vince.Fab). If he could still afford lunch after investing in that upgrade, he’d have more time to eat it. 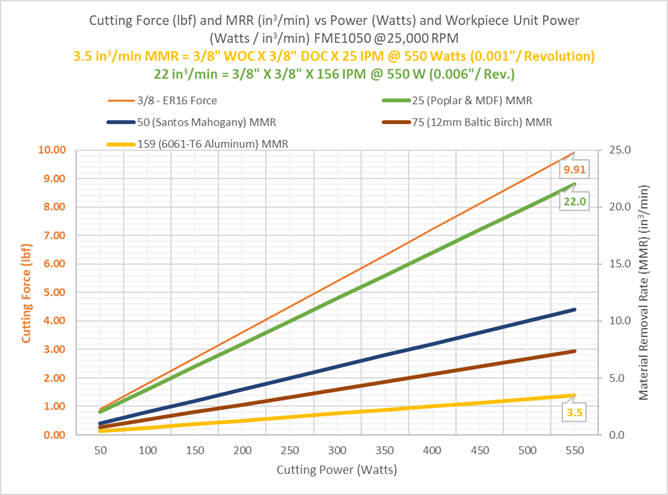 Right, but for that price I can get a 1.5kW VFD spindle so that’s where I’m trying to figure out the right spindle that provides good RPM range and power for a good price.

Maybe these people can provide reasonable shipping for the Jianken JGD spindles and reasonably priced precision collets. (Assuming you end up with something that warrants their use.)

I have one of the new (ish) AMB 1050 FME-W DI tool-changing spindles. I bought it to put on a Shapeoko 3, but it took long enough to arrive that I ended up upgrading to one of @Luke’s new toys. Still Grbl, though.

It works great. I bought it to mostly cut wood, but I’m mostly milling out aluminum bits for CNC upgrades still. I’ve done some testing of automated tool changing, but am mostly using it like a power drawbar at the moment. It certainly makes manual changes easy, but it’s an expensive way to do that.

Driving ATCs with Grbl and the rest of the usual tools isn’t all that easy yet. I’m working with CNCjs; as of 1.9.18 it now has the ability to pass tool numbers from ‘T~ M6’ into your tool-change macro and remember which slots are in use across macro runs, which is a nice improvement. I’ve trying to document and open-source things as I build them, but I don’t really have a lot of useful ATC bits for people to build on yet.

I have a video of it successfully changing tools a couple times here: