If you have a regular C3D router an er11 collet wont fit. If you bought the special C3D er11 collet router then you can use er11 collets.

I bought an 8mm ER-11 collet from Maritool which has worked well:

oh crap, I just have a regular C3D compact router, not the special er-11 one I guess. Are C3D just “Makita” compatible? Is there any other designation I can look for?

The regular C3D router is compatible with Makita collets, and Makita does have a 8mm collet, it looks like this: 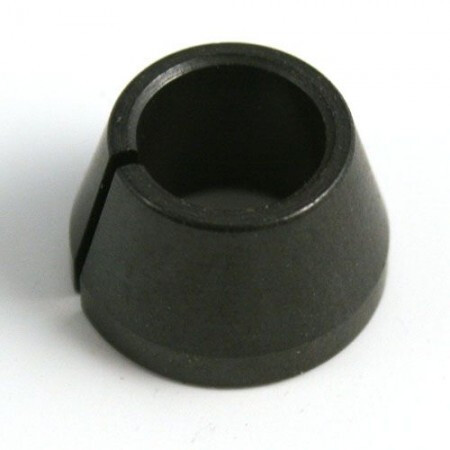 As noted, the Standard Carbide Compact Router uses the same collets (and bearings, brushes, nut, motor, and housing) as the Makita RT0701/0700

Elaire Corp. has an 8mm collet:

(which looks like other collets, just w/ an exceedingly thin wall)

My O.C.D. required that I buy the complete set (though I’ve since replace the 1/8" and 1/4" versions w/ the crisper ones from Carbide 3D)

I must have the reference wrong then because the European version of the Makita (RT0700) definitely comes with a 8mm collet, I have one and use it with 8mm endmills.
That said, Elaire collets are great and probably easier to source in the U.S.

Awesome, thanks everyone! I wound up getting the 4mm, 6mm, and 8mm set from Elaire Corp. Hopefully the 8mm serves me well!