Perhaps this has been done here before, but here’s how I solved my problem with the interference of the X-axis drag chain and the X-axis limit switch. Actually, I was surprised to see this kind of problem. 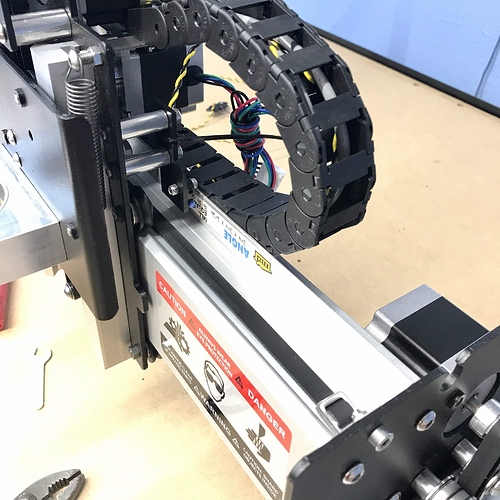 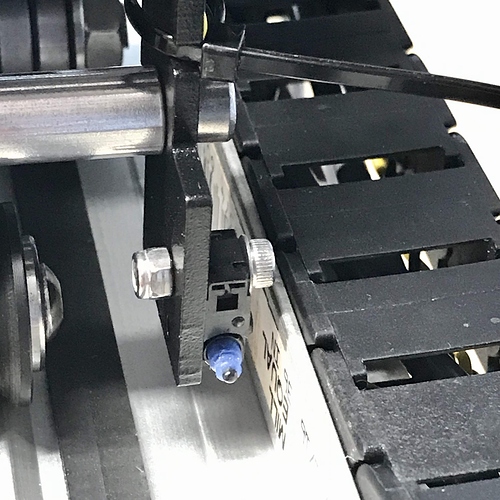 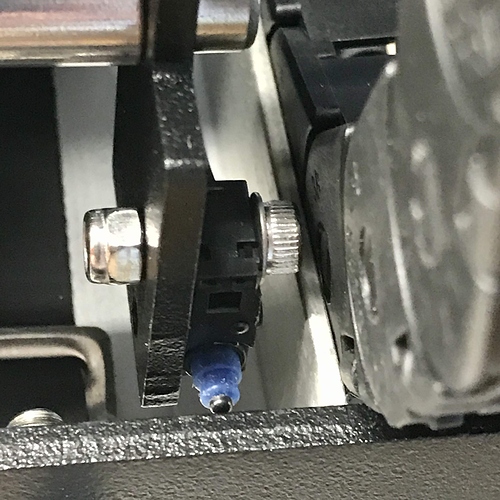 I assume you are referring to the X-axis cable chain catching on the limit switch. Mine was doing that, and I solved 90% of the issue by swapping the socket head cap screw with a button head screw. The rounded head allowed the cable chain to glide over the screw.

Since that was a kludge, I replaced the double sided tape holding the cable chain onto the rail with stick-on velcro strips. Using those I was able to position the cable chain a bit further away from the switch–hanging sort of half-on/half-off the rail. It’s still kind of a kludge and not as elegant as your aluminum angle method, but it works.

I have the luxury of time, too.
Can’t figure out how this doesn’t come without the interference, though.

Instead of an aluminum angle, I put a small strip of weatherstrip foam like this exactly where you put the angle. It works perfectly.

I just used the inner hole on the bracket into the outer hole of the rail and angled it slightly to keep the chain from hitting. If I have another issue, I’ll replace with round head screw and drill another bracket hole.
I too think this should be addressed along with drilling the rail for the opposite ends of the chain.

I had similar problem and did what you did with the screw location. After moving the back of the drag chain further away the drag chain would sometimes fall off the back and bind. I used double sided tape and glued some wooden blocks in place to keep the drag chain from falling off.

Thanks for that comment. Mine is working fine with the aluminum angle double-sided taped in place (for now).

Another thing I did was to use a self-tapping screw in the loose end of the drag chains. I drilled a 1/8" hole for the screw (and nothing blew up.

Thank you for that! I just thought I had messed up during assembly some how.

Maybe I did my setup wrong by my switch is mounted on the front side of the bracket. I do not have any problems with any interference.

My understanding is that mounting shifts the work area left, and may reduce working area by the thickness of a belt anchor.

I just finished assembly of my XXL, and encountered the same binding with the belt I also moved the switch to the front of the bracket. Switch engages on the belt clip now. Only lost a sixteenth inch of travel.

I don’t know exactly how you installed the switch but you can sometimes loosen the screw and twist the belt clip just a bit and re-tighten. If it is too close, you can possibly add a washer to push-out the bracket. I now have the HDZ so it is different but my X limit used to touch the drag chain and I used some glue-on foam weather stripping on top of the gantry to keep the chain away from the switch so it would not interfere.