I’m trying to do my first tests with VCarve-based inlays. For some reason, the Advanced VCarve pocketing pass ploughs through my material at maximum depth. It does not seem to respect the tool’s Depth per Pass. I’ve attached a screenshot of the settings below, as well as the gcode.

This is unfortunately too much for my poor little 3018 CNC (but I fortunately did not break the bit).

As I’m pretty new at all of this, I may very well have missed something. How could I fix this?

Edit: Upon closer examination, I see that the left vcarve toolpath does in fact create have intermediate depth passes, but the right (inverse) vcarve toolpath does not. Might this be due to the fact that Max Depth D (3.5) minus Starting Depth S (2) equals roughly my Depth per Pass setting (1.4)? Is there a way to make advanced vcarve create proper Depth passes for the depths between zero and the Starting Depth S?

Edit 2: Before the 2nd vcarve toolpath, I have now added a pocket toolpath (with the nub in the middle as an island) to clear the depths 0 to 2mm (2mm being the vcarve toolpath’s Starting Depth S). Is this the correct way to handle this?

(This example is just a vcarve slot to the left, with the hopefully fitting inlay to the right. The settings shown are for the right inlay part. They correspond to a 1/8 inch bit, a ~0,14 inch maximum depth, and a (desired) depth per pass of a little less than 1/16 of an inch) 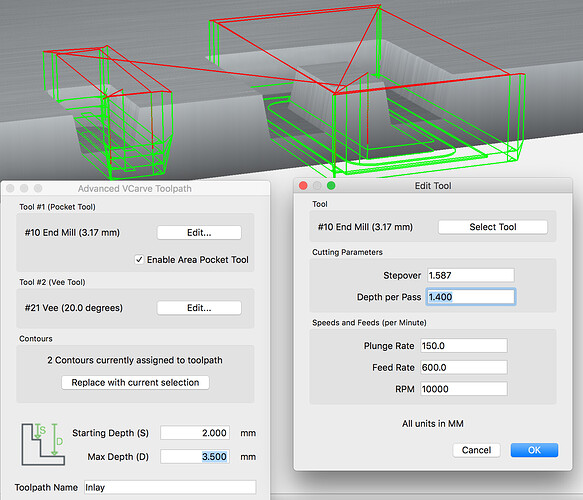 You could do an extra pass from 0.0 to 2.0 before.
It’s not ideal but should get you to your goal.

Thank you @fenrus and @nlichtenberg, it all makes sense now! The meaning of starting depth is no different from any other toolpath. Prepending the 2.0 to 3.5 vcarve pocket-island with a proper pocket from 0.0 to 2.0 is the solution. I was assuming that advanced vcarve was somehow magically changing their meaning. Thanks a lot!