You just switch the left and right connectors until they work the way you want. One already turns “backwards” and the other forward. Switch them and you’ll be fine.

Aren’t you just moving the motor forward, to the other side of the X extrusion? They’d still go the same direction.

They’re not only moved forward, but they’re turned 180-degrees and mounted such that they ride over the tops of the y-extrusions.

Oops…I should’ve looked at the pics.
@mikep’s advice is sound.

When I started this, I hadn’t realized I would need to drill new holes for the x-axis belt retainers.

So I had things mostly reassembled when I discovered this, and I didn’t want to tear down again.

So I made an alignment block to keep my drill bit positioned correctly, and drilled the new holes with the machine assembled.

But now I need to deburr the holes and things are pretty tight.

Any tips for deburring these holes?

Tips/tricks would be appreciated. Alright, someone at another forum suggested the handle-end of an old round file. I found one small enough and it make shore work of it.

This is really interesting, my cabinet restricts how far I can go forward, inverting like this would help a bunch. Especially when I attach a vacuum shoe.

Does anyone have a step by step guide? I can probably figure it out but … you know

I don’t have any step-by-step, I just sort of winged it based on what I saw in the pictures, as evidenced by the fact that I didn’t catch the need to drill new holes for the belt clips.

And when I discovered that, I had a bit of a panic attack because I knew they’d have to be placed pretty darn accurately, and I didn’t want to have to tear the machine down again. But maple block of wood drill bushing to the rescue.

FWIW, having super-sharp drill bits on-hand would have made it go more smoothly. I stopped after my first set of holes and went to Home Depot to buy a new bit (much better!).

I think these were my steps:

I think that is about it. I haven’t calibrated my belts or anything, I haven’t even turned the machine back on. I still have to re-route all my wiring (OH, BTW, I don’t use drag chains, so take that into consideration and contemplate any necessary changes if you DO use them).

Using a “very large” (ie. 2x the diameter of the hole) drill bit, just spin it by hand and it’ll deburr just fine.

On the McMaster order… I am presuming I need 8 spacers and 8 screws to re-mount the two motors?

Correct, you need eight spacers and eight screws, but you’re going to have to order the screws in a pack of 50.

Apparently I have to type this sentence to post my reply!

Ok this didn’t go according to the plan.

The main issue is the motor doesn’t line up with the pulleys using the new spacers I brought. 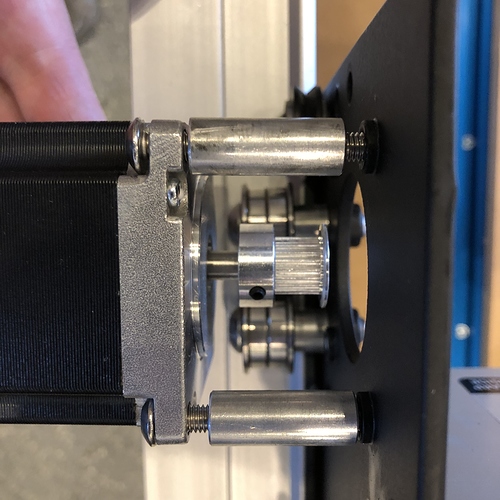 You have to remove the set screws from the pulley on the motor, and remove/reverse the pulley.

There might be two set screws in the pulley, after you remove the one you can see, there may be another in there (the second one locks the first one in place)

The instructions worked a treat. I took photos of each of the steps, including repositioning the cable drag chain. What’s a good place ‘post’ a full set of instructions based on your notes and my photos?

So the final step, it looks like I can increase Y from 360mm to 425mm. The wiki is down so I can’t figure out how to do this so I can take full advantage of the extra space…