Was surprised to get some chatter on aluminum after running Winston’s feeds and speeds that were done on the SO3. 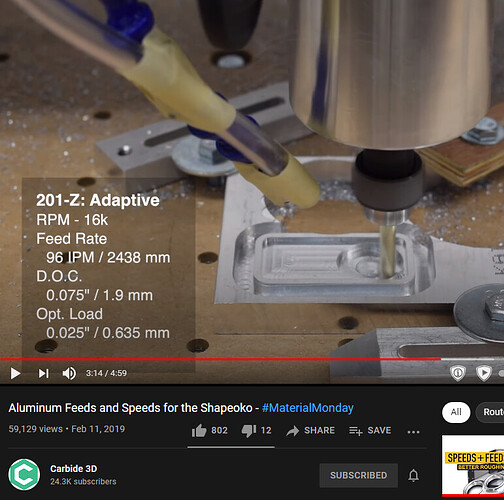 I would expect the Pro to snooze through F+S recommended on the SO3? Also, I have to helix entry at 800mm/min and it still sounds preeeety terrible.

The only last thing i can think of is my workholding - superglue on to MDF that’s bolted down. 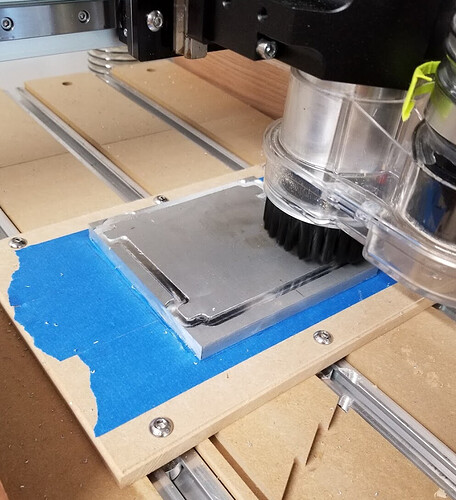 Is that toolpath running side to side and doing slot clearing? Specifically, is it doing the constant engagement 0.6mm or slotting that aluminium plate? Are the chips coming out of the slot fast enough or getting jammed up and re-cut?

The machine was happy and kept being happy as I pushed up to over 1,200mm/min in feed override. I stopped there as the workpieces were quite small and I didn’t want to break them loose of the MDF board they were stuck to.

Sorry, the picture was just to show the workholding. That was a contour operation, that other than the ramping speed, worked great.

This is the adaptive that clears out the center 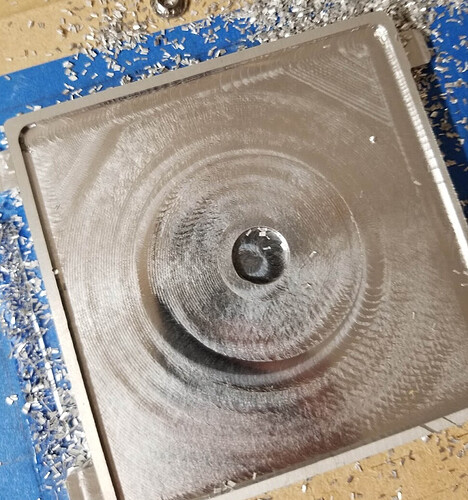 Chips are very well evacuated - this picture is after hitting pause, no cleaning afterwards.

What degree helix? Try 1 degree and changing the diameter to 50% cutter diameter.

Just to be sure, have you checked the mechanical aspects of the machine? Is the router clamp tight? Are the belts properly tensioned?

And since you’re doing a spirally path, did you notice the chatter sound varying in intensity as the cut changed direction or was it pretty constant the whole time?

Another possible variable… what grade is your aluminum?

Thanks to everyone for pitching in

What degree helix? Try 1 degree and changing the diameter to 50% cutter diameter 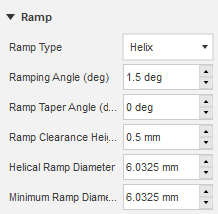 Okay I’ll make those changes and give it a shot. The ramp diameter might help a lot as this means half the diameter is basically not cutting as it ramps down.

@Moded1952 , belts yes. Router clamp is quite tight, although I did notice that I had to really go to town on the 2 clamping bolts. The grub screws was miles away from being needed, putting the makita in the bracket there was a ton of slop. I don’t know how deep the blind holes go but I can’t help but wonder if I’m bottoming out, but surely C3D left a ton of space.

Now that you mention it, the chatter was only the front side. Higlighted is where the chatter would thrum, then stop 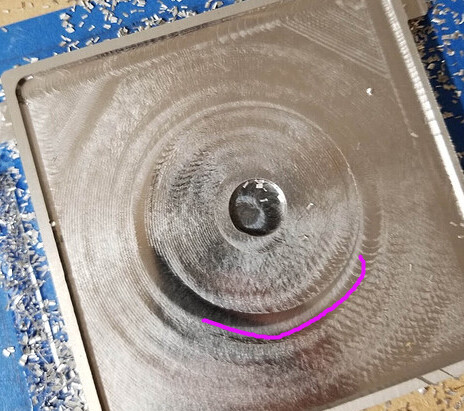 Basically 4oclock to 8oclock. The cut direction is climb.

The floor finish indicates something is moving, I would check every bolt on the machine and start sweeping everything with an indicator under no load. Then apply force by hand to your router mount and test deflection.

Ive had my X extrusion linear rail bolt loosen up, appears that loctite was not used on install. However, with this still being a “kit” cnc, IMO you should put a wrench on everything just to make sure.

Those of up with Pros that machine aluminum could come up with a test part to check the mechanicals and cut accuracy. Also, please keep in mind that an adaptive pass IS NOT A FINISHING STRATEGY. Due to the high load and high deflection, you should always run a separate low axial/high radial finishing toolpath.

Yes, this leaves 0.3mm radial and axial to finish up :slight_smile

The next op’s, in order I kind of guessed at but maybe this came from one of Winston’s video’s

What sort of deflection would you expect strong-arming the router around by hand? 1-2 thou? I imagine front-to-back nod would be more severe then side to side.

My chatter when cutting aluminum turned out to be a loose Y-axis belt.

I have recently tensioned and calibrate belt tension to be even. Can barely fit a finger under the belt unless I really try. I’ll post a video tonight of tension.

Also mine is only at the bottom positions indicated, not the top… if it was loose belts it should be mirror’d movements?

Update - tightened quite a few linear rail bolts at lunch on the X. Y was not as bad. Using a regular hex driver, not a T or ratchet. Erred on the side of not stripping out my aluminum crossbar. The Z seemed fine as well.