Bad idea to go for SO3 now?

I’m planning on picking up a CNC in the next few weeks, and am debating between the 3 and 4. Cost is a consideration but I could go either way. I was leaning toward the 4, but then I realized that the 3 extends farther beyond the table (on the Y axis) which will allow me to mill vertical stock places in my vice.

While this won’t be the primary use, it will be quite useful. The 4 apparently has 3/4” of extension (compared to 2” on the 3); I don’t think 3/4” would be enough room to route (for instance) dovetails.

Other than the marketing bullet points, what would I be missing on the 3 vs the 4? Will there be continued support for 3 over the coming years? Will software updates to CC and CM still work on the 3?

I realize these are questions requiring a crystal ball, but for the old timers here, was the 2 supported long after the 3 was released?

Just trying to figure out the pros and cons of all the different options… unfortunately there is no single winner that does everything.

Thanks for any thoughts or opinions.

The 2 was an open source type thing and wasn’t really supported by the company.
The 3 (especially with the last couple of improvements), is a super robust machine, so hard to go wrong.
4 I think gives you the same overhang advantage (I think?), will run faster/harder.
CC and CM should still work on the 3 for quite a while. I can’t imagine the company, which has continually amazing support and bends over backwards to make sure customers are good to go, would abandon a large number of machines that are out in the wild.
If you are looking for a 3 though, due to cost, it may be worth keeping an eye out for a used machine.

The transition from the 2 to the 3 was not comparable, since the two machines were sold by two different companies and the 3 was a clean sheet redesign w/ the only shared parts being the Delrin V wheels and eccentric nuts and GT2 pulleys and belts. Please note however the recent statement that it’s okay for folks who wish to to source a Carbide Motion board (and pins, and Molex KK housings and a crimping tool) and install it in a Shapeoko 2.

The software will continue to work — we still provide Carbide Motion 3 as a download for folks who have machines w/ Grbl 0.9 which was what was provided w/ the machines back in 2015.

For the specifics of on-going parts availability please write in to sales@carbide3d.com — I’m sure things will be supported for at least a year, and it should be for the foreseeable future — we still support the Nomad 883 Classic and it hasn’t been made for almost 7 years.

The overhang cutting area is nice, but there are joinery options which allow one to cut joinery into a board which is flat on the machine (see below).

A 3/4" overhang will allow one to do boards up to 3/4" wide — you just lose the ability to gang them up to cut multiples as shown at:

That said, I have a sketched up design for when I get my Pro where a T-slot extrusion is removed and modified to make it into a vise to clamp (and register) boards vertically so as to cut joinery into them.

That said, I will note that while it’s conceptually neat, I find cutting joinery into the ends of boards somewhat tedious since it’s at a minimum (if one can gang up all four boards) a minimum of 3 setups:

(yes, I’m incurably lazy, just ask my wife — arguably this is why I bought into the idea of a robotic assistant)

For another example of a joinery technique cut fully flat on the machine please see:

Ahh, I didn’t realize shapeoko3 was the “first” of the non-open source versions. Good to know.

I’ll have to take a deeper look at various flat joinery techniques; thanks for the tip on that, William.

I guess we’re lucky that we have so many good options… it just makes these decisions harder!

I have not taken a good look at the 4. I have an xxl and an xl 3. They are great but as with any new model that will take you farther into the future. So with the pro model improvements and the 4 just around the corner the 4 will take you further. You can do jointery but as an experienced woodworker dovetails and box joints are easier the old fashioned way. I have an Incra positioner, Akeda DovetailJig and an Incra I-box. You can do anything on a cnc but some things are just easier on analog way. I use my Shapeoko to and augment my boxes and furniture to personalize and enhance traditional work. Some things strictly on the cnc but a hybrid approach mostly.

You can’t go wrong with the SO3. I sold mine to a friend because it has been so reliable. I will have an SO4 coming, and I simply don’t have room for 3 XXL sized machines.

I suppose it depends on your particular use case. I’ve never used the overhang, doubtful I ever will.

I haven’t looked into the 4, but I believe it replaces the machine bed with something improved, or matching the new Pro. For my use case, I find the stock SO3XXL machine bed to be terrible, completely void of stability or rigidity. You could attempt to improve it by placing foam or something under it, or you could replace it with effort or money, or both. If the SO4 replaces the steel endplates with machined aluminum, that’s an added bonus. For another $300-400, I’d go for the SO4.

I suppose that’s part of my hesitation… this being my first CNC I don’t know what I need and what I don’t. I know traditional joinery, and am currently thinking that I would use it in conjunction with the CNC, but it may be the case that I end up doing completely different things with it. For the extra $500, you get more stability and future proofing… but at the expense of other things like reach. Most people may not use it, but for those who do it can prove invaluable.

Oh well, I suppose I will see what happens may 1… if there is stock available on 4 I may go for that, otherwise I may just do 3. Let fate make the hard decisions for me!

I had wrote earlier to go with the 4. However today I used full capacity of my xxl 3. The piece is cut from a 33x7 inch piece of treated 2by material. Being cut is a pair of rear legs for a modern Adirondak chair. I was so close to max distance I jogged 1/4 bit to back limit. Then I pushed material against the bit and locked the piece down. To zero on front left corner I jogged bit next to X and Y and zeroed. The jogged over .125 inch in both x and y and set zero again. Then used paper method to set z zero. I was afraid using BitZero that during probe th would hit max y travel and cause loss of zero. The material stuck off the front. 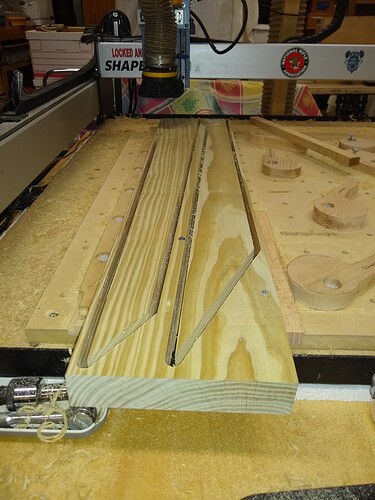 This is off the front. 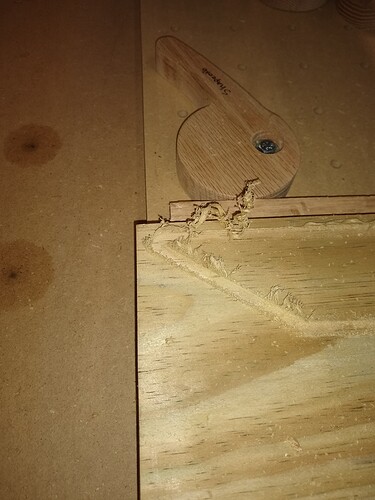 This is rear of material.

It just worked with little to spare.

I’ll weigh in bed size between the SO3… and SO4/SOPro. The SO4 should match the SOPro bed size looking at it, but that’s an educated guess and the folks at C3D can feel free to correct my assumptions if need be.

The change to put the linear rails (SOPro) or vwheels (SO4) on the outside of the extrusions nets more X travel than the SO3. For some reason they don’t really advertise that. But I guess saying 33" is safer.

The SO4 and SOPro don’t sacrifice/reduce Y travel, they rearrange it more rearward, over the bed. They flipped the extrusion to the rear of the Y carriages instead of in front, as on the SO3.

The SO3 served me well for 4 years and I sold it to my friend so I can visit it.

But I am stoked about the changes with the SO4 and SOPro.

They also said that the change was meant to give more work area (which I completely understand and support).

It’s just unfortunate that one (unintended?) side effect of the old way allows for vertical milling and is now removed.

I have heard lots of good things about the new bed, which is definitely going to be a factor in my decision. As I said before, I just wish I could have my cake and eat it too

Now that’s an interesting thought… that would give me the flexibility needed if / when I need it, with the larger / firmer bed and all the other benefits. I’ll have to look into that further.