Belt Tension Tip on SO3

I noticed my pockets were running a little short in the X axis, so today I decided to re-tensioned the X and Y belts, as I could get a finger under them pretty easily. i was having a hard time getting them tight. Then it dawned on me to try a longer screw. So I grabbed a long screw and now my belts are finally tight. I started calculating for belt stretch to make adjustments, but after cutting several circles and square pockets of various sizes I was already within .002" using the the default 40mm per step setting. So I decided that is close enough for what I use the machine for. Next I measured a piece of MDF using calipers, and it was .26". So I set up a test to cut a .26: deep pocket. I think my Z is off by a couple thousandths as well, as I could just feel the edge of my MDF gauge with my fingernail when I put it in te pocket. I have a new Z belt, but I finally have the Dewault trammed and pockets are cutting beautifully, so I decided to leave it for a while while I decide whether or not to convert to a linear Z slider from CMC4NEWBIESon eBay.

Oh yeah, before cutting anything I jogged the machine over to each end to make sure the longer tension screws will not interfere with anything, and it is all good. 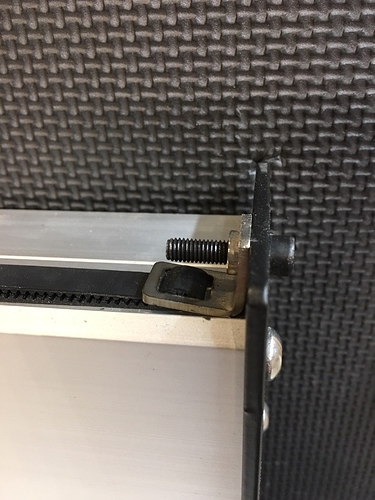 tell me more about this.

The linear slider from CNC4NEWBIES is being used by quite a few over on the Inventables forum, and so far I haven’t seen a bad review. Just go over their and search it, there are several threads. It looks like the latest offering offers 6-7" of Z travel (some people are lifting the gantry via the X plates or via the Y plates) and they are now offering a fast pitch screw. The company is pre-drilling for the X-Carves, so it is a simple installation. I have a picture of the Shapeoko 3 X axis plate with dimensions, but not the actua dimensional drawing PDF file. So I need to send them specs for the holes I need drilled to match holes already on the plate. I emailed them about providing a pre-drilled version for Shapeoko 3 users, but have not heard back. I need to try to contact them again.

FWIW, as I’ve noted previously it ought not be too hard to convert an SO3 over to an Acme Screw drive: https://www.shapeoko.com/wiki/index.php/User:Willadams#Acme_screw

How would you go about calibrating the machine to accept the different movement?

Calculate the number of steps per https://www.shapeoko.com/wiki/index.php/Grbl_Configuration#For_Z: and update $102.

Incredibly interesting. I have never played with the GBRL setting since getting my steppers. I found a dead link on the calc to work out the micro steps per MM.

I also found this site:

very interesting - I’m going to have to play…

Note that there’s an article on this here as well: http://docs.carbide3d.com/shapeoko-faq/how-to-calibrate-the-machine-for-belt-stretch/

I asked them about this… There is a $34 adapter plate for the “LP” model. With that, it’s supposed to bolt right up.

How did you contact them? I filled out the contact us form on their website and have not heard back, but I see lots of posts where people say they messaged back and forth with them. So I must be doing it wrong. Thanks

Just using their contact us form - took a couple days before i got an answer, but they did answer.

Thanks. I got ahold of Joe. Ordered my Z Slider today. It comes with an adapter plate drilled to fit on the Shapeoko and he is drilling holes so I can use the spindle mount. It should arrive early next week. I hope to get it installed soon after. I will post pics and a review.

I have never been a huge fan of the Z on my SO3. This post is not meant to bash the design of the SO3 or anything like that. I read the forum all the time and know that plenty of people have no trouble getting their Z belt adjusted. I’m not one of those people. I have had issues with losing steps, especially when working with short bits toward the bottom of the rails. I also had issues with dust collector brushes being stiff enough to interfere and mess up my Z. My SO3 does bot have the screw te…