Anyone else have issues with the wires breaking off the connectors inside the flex track for the servo motors. I just had my 2nd one happen. 1st time on the Z axis and 2nd one on the X axis. The connectors they use are intended for a circuit board installation not as cable connections.

Anyone source a better connector that still fits inside the flex tracks ?

Unfortunately when this happens both times ended up scraping the job because the servo motor just starts jumping all over. 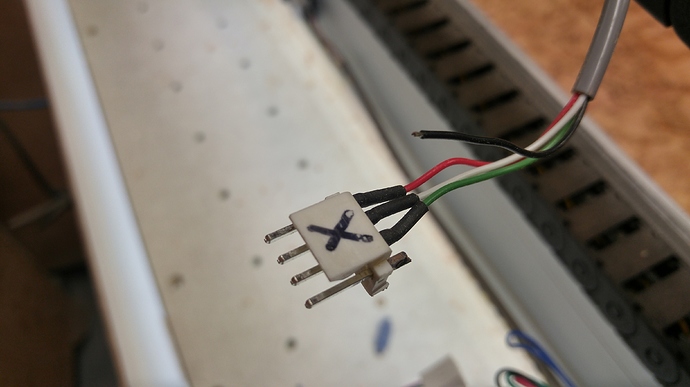 It’s not really the connector’s fault. Putting a soldered connection in a flex like this is the real problem. The right way to solve it is by keeping the soldered connectors out of the flex. That’s not possible without making new extensions for the cables, or using a connector with a crimp terminal instead of a solder terminal…but those are generally somewhat bigger and won’t fit in the flex. Keep the soldered area to a minimum when you fix it, and put some strain relief on the cable in the area (a chunk of tongue depressor would work, you get the idea) (under the bit of cable…connector…connector…cable to prevent the soldered area from flexing on each side of the connector) - you won’t get any flex in the cable tray there, but it also won’t break.

Happened to me so much on the Y axis and got so sick of soldering the wires back to the prongs that I ended up removing the clips all together and just wire clamped the wires together with connectors.

it’s unfortunate that the extension cables they provide in the kit, plan on that connection being inside the track. I’ll keep looking for a better conector or like someone else said just remove them and make a wire to wire connection.

Even with a wire to wire connection, you still need to use a -crimped- connector, not just solder the wires together. They’ll work harden at the ends of the solder and break. When using crimped pins, that doesn’t happen.