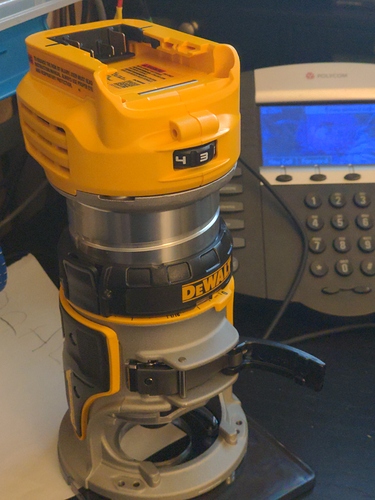 So I think Home Depot messed up. They had two overlapping sales. I was supposed to get a 4 piece tool set + two additional tools for $399 dollars. However if those two free tools were two of the ones listed in this other sale you got $70 dollars off. It looks like they fixed this in their computers afterwards though. I ended up getting something like $1200 dollars worth of Dewalt tools for $330. The Dewalt DCW600 Brushless Trim router was one of the the extra tools.

Being interested in running Brushless Spindles and having some troubles with the Makita + ODrive combination (ODrive Developers are looking into those) I figured I would give the Dewalt a try.

Number one thing I found out is they are very hard to get apart. You have to remove all the screws and then use a 19mm socket to undo the nut that is below where the collet is. Then you need to get something long and pokey and put it into where you put the endmill. Make sure it is something that won’t harm the surface. Then you need to beat on that pokey thing for like an hour to drive the plastic inner housing out. Being careful not to lose the four metal pins that are keeping the two plastic parts from rotating (I lost one of them).

I found technical drawings and specs on the UK Dewalt site for the tool: http://service.dewalt.co.uk/DEWALT/GB/en-GB/Product/ProductDetail?id=14919

Despite Dewalt’s marketing they spec it at 18V instead of the 20V they have all over the package. Apparently when the batteries are fully charged and not plugged into a load they read 20V, but as soon as you put a load on it, it drops down to 18V. At 18V it is a 930W motor which implies it can handle a little over 50A of current.

It is using industry standard connectors for things like it Hall array sensor which means connecting to a different ESC to it should be fairly simple… once I get the epoxy they used to keep the connector from vibrating loose off.

The illumination LEDs have a resistor already inline which means I can probably put 3.3V or 5V across them and they will just light up.

The motor wires from the ESC are soldered onto terminals on the motor armature so disconnecting the ESC will require some soldering skills.

Overall it looks promising. Wont know though till I hook it up to my ODrive and see how it performs.

#EDIT: LEDs actually take 18V across them. That will make things interesting.

So I got it wired up to the ODrive and running. It has a whine to it that I don’t like. Wondering if I trashed a bearing getting it apart which would suck. Here’s a video:

Forgive the shakiness. Trying to film and adjust parameters is difficult.

Over all for having not been tuned it’s performing well.

Any thoughts on the whine?

Any thoughts on the whine?

Have you tried changing the chopper frequency in the drive?

It is definitely mechanical.

Found the problem. The wires for the LEDs had gotten caught in the stator. Glad I figured that out before a short. Ended up cutting the wires. I will worry about getting the LEDs working some other time.

So I am shipping the Dewalt to one of the ODrive devs. They are going to figure out what is causing the issues.

Good that they’re that involved, If you want to go maths-pun you could call your mod the dWalt

Yeah and I am keeping the modkita because I have a working (but strange) 4.12 config. THe dewalt just doesnt work. The devs were actually happy to be able to test their stuff out on something other than hobby motors.

WARNING: I am going to be talking about this motor in RPS (Revolutions Per Second) not RPM. It is what the ODrive uses and makes explaining some things easier.

So I got the Dewalt back last week and finally got it hooked up today. PJohnson with the ODrive Dev Team had fun playing with it. One of the improvements that they made was with the hall sensor calibration code. Apparently the hall sensors on this motor are not the most accurately positioned around the shaft. This is probably also the case with the Makita. When running in hall mode he was able to get the Dewalt to about 250 RPS before the current would get unstable. He spent quite some time trying to improve that. The problem is that with two pole pairs, hall sensors only give 12 position updates per revolution. The rest of the time the ODrive has to try to guess where the rotor is.

Eventually he switched over to sensorless mode and was able to get up to 500 RPS. In sensorless mode they know mathematically how the motor should respond to the voltages they are applying. As such they measure the current and they know the voltage (they are using PWM to apply it). From that they can see how the predicted current deviates from the measured current and work out the motor position from that. This is why in sensorless mode the motor is behaving better than the hall sensors at higher speeds. Effectively sensorless gives them unlimited resolution on the motor position. It just does not work below a certain speed.

They are potentially going to be working on a hybrid mode where both an encoder and the sensorless estimator are used. This should allow for higher acceleration and much lower RPMs than sensorless alone.

Now that I got it back I hooked it up to the ODrive through the inductors I have. While playing around with it I was able to get up to about 720 RPS running in sensorless mode before my powersupply tripped its protection circuit. The higher inductance keeps the current stable longer apparently. This speed actually doesnt make sense. The ODrive is technically only able to get up to 70% of the theoretical V * kV rating of the motor. I am running at 28V and the motor is 1650 kV which is 46200 RPM or 770 RPS. In theory the motor should not be able to get much past 539 RPS. This has them scratching their heads a bit. I do not plan on running above 500 RPS though. I do want to get a beefier 24V powersupply though to match the Dewalts 930W rating.

Some nifty things I learned in this process is that the ODrive’s update loop is run at 8kHz. Meaning it can change the voltage applied to the coils 8000 times per second. As such if the motor is spinning at 800 RPS the ODrive can only change the voltage 10 times. Try making a sine wave with just 10 points. It ends up looking pretty shitty. This is why the current gets unstable above a certain speed. Their version 4 hardware will have a much faster mircocontroller and will have at least a 16kHz update loop. In the mean time 800 RPS is basically the limit.

I was able to get a 48V 1000W power supply from Amazon for a really great price:

Only complaint is that the fans in it are always on and very loud. Not that that matters much once I start milling. The higher voltage makes higher speeds attainable. That said going much over 500 RPS (30,000 RPM) makes the bearings sound unhappy. Might look into replacing them with something rated for higher speeds.