I don’t know about you, but running build 548 and Mac OS the advanced v-carve tool patch appears to be really bad in terms of tool path, rather than concentrating on specific pockets the tool path is hopping between pockets needlessly, rather than completing a particular pocket before moving to the next its pocketing a small area, moving to another pocket, completing a small area then moving back to previous pocket , back and forth, just look at the fast moves on ncviewr fo the attached 91 MU mabcahster.nc ( its all over the place back and forth to the same points needlessly increasing the tool path time rather than focusing on one pocket clearing the area and moving on.

Not convinced this is right, never used to be this bad in previous versions.
I’m seeing tool paths increase 4 fold here.
Tried this same file with a 0.79mm end flute for quick clearance on big pockets then a 90 deg vbit, and then tried with a 0.15mm end flute with exact same tool path needlessly move back and forth

266 G0 moves in total, take out the final advanced moved eg the pocketing element final cut moves and there are still 205 G0 moves in the quick pocket step 1 of advanced carve!

Two screen dumps here, 1st is build 648, 2 is build 650, look at the difference between hops, virtual identical, so latest version still appears to have same issues. Most of my work relies on advanced vcarve, I have tool paths 2-4 time longer than they need to be…

Appreciate you comments on this! 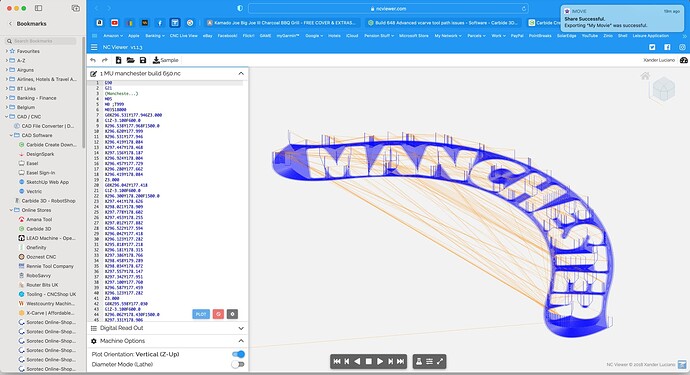 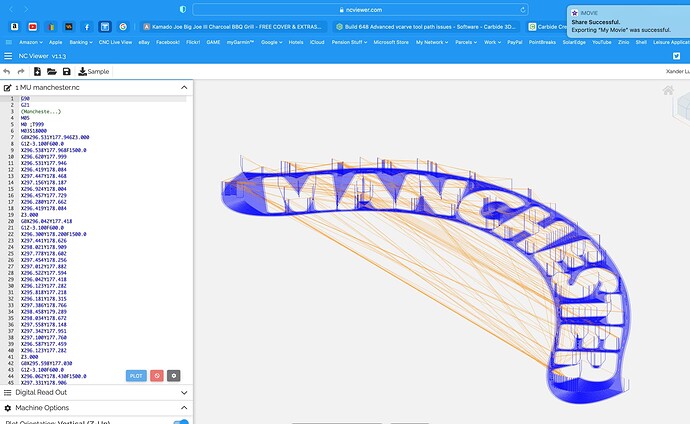 Hi Rob, have you guys had a chance to review this please?

There have been a number of little changes to fix toolpath problems related to vector shape and orientation. The change in rapid moves indicates that something in the toolpaths generated by your file has been affected by this.

Bigger picture, you don’t have a pocket tool defined so the biggest reduction in toolpath time for you would be to use something like a 1/8" cutter for the pocketing part of the Advanced V-carve toolpath.