So I’ve been using the shapeoko 3 for a few weeks now, and there are a number of things that Carbide Create just irks me on, but that’s neither here nor there, nor anything I really blame on the limitations of carbide create, but I’m looking to broaden my horizon a bit. CC is a great way to get started, but I need to get the training wheels taken off and get back to doing real work.

At present, the toolchain I’m using is Solidworks 2017 -> Export to DXF -> Import dxf to carbide create -> Create my tool paths -> Route it on the shapeoko.

One thing I really like about CC is the ability to select what order the toolpaths are completed in, this allows me to do certain things like make sure certain slots are cut first, and then in the final step I route the part out of the rest of the material. This has kinda saved me from dealing with the tags and straps that other people use, and then cut the piece out and finish it. I put a somewhat large chunk of steel underneath my shapeoko, and I drop a large neodymium magnet onto the part as the shapeoko is going into the last section of the G-code, and cutting the part out. (this has kept the parts in place without any issue mostly)

Carbide motion has a few quirks, and I wouldn’t mind moving towards something else, the main thing that bothers me about it, is it doesn’t allow any adjustment of cutting speed after it’s been programmed by CC, most commercial CNC’s allow you to dial the feedrate, this makes it quite a bit easier to essentially run the program without a tool to verify everything is going to stay on the stock, however this verification process can take forever if you’re anticipating a small tool (1/8") and have a lot of cutting to do. The other issue, is if you have to cancel or stop the process at some point, pause is great, but to get the tool out of the way, you need to cancel, and then have it re-execute the whole routine. If something like a depth offset was wrong on your final cut, it’s a long and irritating process to either re-run the whole program, or re-open the carbide-create file, and generate new g-code that only runs that final operation.

Also, god forbid if you need to drill a bunch of holes, and make the mistake of putting them all in a single toolpath!

I definitely think some of these issues will be corrected as CC and CM get more mature, but for the moment, they are just not doing a good job of meeting my needs.

I’m definitely looking first at open-source applications, I’m mostly stuck with win64 at the moment, but I’ve been running linux for 20+ years, so don’t hesitate to recommend a linux only application. 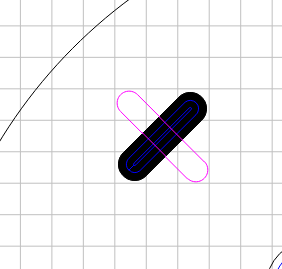 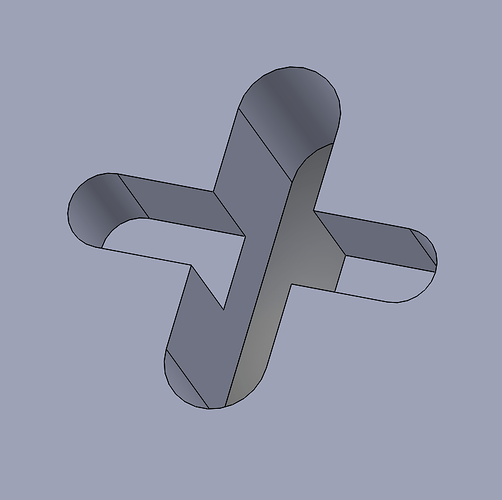 I thought I would add one of the things I’ve been having problems with… in CC when you have overlapping geometries like this, the software gets really picky about seeing it as an entity. I’ve dealt with this program before by creating two routines and running each separate, but that’s getting a little tedious as my projects get more complicated.

In this case, this is a slot for a bearing, and then another retaining slot, where the pin that goes through the bearing is supported. This is for a case feeder I’m working on for a customer.

Here’s what it’s going to look like when it’s done: 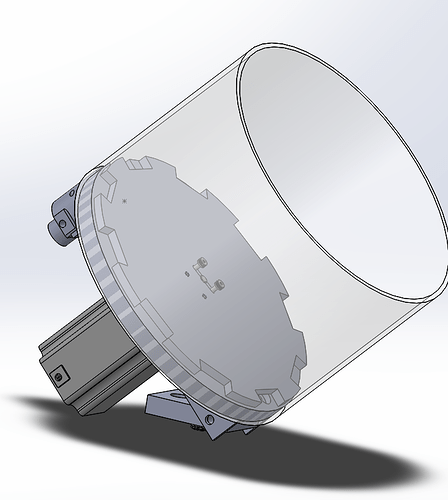 HSM is available for solidworks (same CAM as inventor and Fusion360, presently owned by autodesk), but the cost is not negligable for the full featured version. You might try exporting to Fusion (free for most non-commercial use) and generate toolpaths there. Benefits: good tool with some good strategies, integrates well with solidworks. Drawback: $$$

Thanks for the suggestions… I’m not ready to drop my current toolchain to move over to something like F360, I looked at it a while ago before I ended up buying SW. The big thing, is I’m frequently left without internet or internet by satellite, which hasn’t been so great for web-based systems. I did look at Catia a while ago, but that’s not a bigger hammer, that’s a rocket launcher.

I really don’t need a lot of the more advanced features some of these systems offer, I’m not doing any profile milling at the moment, I’m mostly interested to see if there’s something that’s about 20% better than what I have now.

Well, we have tried to list all the opensource (and reasonably free) applications at:

There are post-processors which will fix up a file if one has selected multiple pockets:

I believe MeshCAM runs reasonably well under WINE — willing to consider it? Or, not opensource, but free and listed above, FreeMill — Tim Foreman wrote up about using it and seemed pleased enough — even created a post-processor for it if memory serves.

I seem to think I took a look at meshcam a while ago, it’s $400, for the bundle I think I want (not totally sure). I’m obviously not 100% OS, as at the moment I’ve got Solidworks in the mix.

One of the rather irritating bits about CNC these days, is there are so many half-ass products competing not even for your dollar, but for your time, that it can be difficult to get it all figured out. The worst part is, most of the tutorials are written in such a manner that they anticipate people coming in with nothing, where in reality, you may already have a pile of hardware but no idea how to get everything talking. Which is kinda where I am.

The CAM built for solidworks is HSMWorks, but it’s a few thousand a year (and as noted earlier now belongs to Autodesk which you are trying to avoid). MeshCAM is $250 and you can try it for one month free. Your workflow would change a bit since you need an stl to import into MeshCAM instead of dxf. But I find it pretty simple and easy to use.

Dassault bought Catia I think 2-3 years ago, and has been doing a lot to integrate the two products, I know Catia natively had a lot of CAD options. The company who does all of my laser-cutting uses Catia, and I have a little bit of experience with it. I’m really not anxious to buy more multi-thousand-dollar CAD/CAM packages, I was really hoping to start pushing everything over to Linux in the next 1-2 years (I really hate windows 10), however I’m waiting for some of the systemd stupidity to blow over, all of my servers are running some flavor of linux, mostly CentOS 6.x. I need to get around to seeing if I can get SW running in Wine.

I’m going to give meshcam a try, probably later this evening or tomorrow, at the moment I need to do some manual machining to make some brackets. So far, Meshcam has been kinda the common thing most people have recommended in this and other threads, there’s no reason not to check it out.

Thanks for the recommendations.

Out of curiosity, is it worth getting CutViewer as well? The Pro/Art version seems to just have extensions for vector art formats (I don’t use these)