Can the shapeoko pro XXL be mounted vertically?

I have a shapeoko pro xxl on order. While I wait for delivery, I’m figuring out where the machine will live and be stored. I’m wondering if the machine will function correctly if it is mounted almost parallel to the wall, like a panel saw. 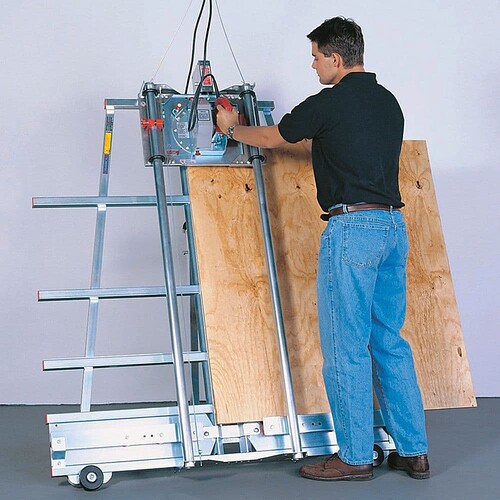 If the pro xxl model must be laying horizontally during use, can it at least be stored vertically like a murphy bed?

I would think it may be able to be stored vertically, However I would think it would have to be run in the horizontal positioning due to being belt driven. I am not sure how vertical storing would affect the machine.

When you power off the machine the stepper motors disengage and gravity would come into play meaning you’d need to be carefull making sure the gantry is at the lowest position (closest to the ground) otherwise it will just drop and slam into the front of the machine. (EDIT: I believe this could maybe also generate a charge going back into the control board and maybe cause some damage so get feedback from Carbide 3D) Would also mean that in the 1 direction the steppers would need to lift the entire weight of the gantry and router in addition to the cutting forces perhaps bringing you that much closer to missed steps which is undesirable. Just my thoughts/assumptions.

The steppers and controller board would not like being forced to passive brake the machine as the gantry descended so you’d be best parking in the low position or fitting a chock of some sort on the spoilboard for the Z axis to rest against.

I would not attempt to operate with the machine vertical, as already stated that’s not likely to result in good precision or machine longevity.

The panel saws use a counter weight. A rope and a couple pulleys and a weight equal out the weight of the saw. I would try to come up with a similar idea for the shapeoko. The belts would not be supporting the full weight of the X and Z axis.

You’d need to counterweight both Y axis plates evenly and you’d be better than doubling the inertia the Y motors have to drive so you might end up having to reduce acceleration on the Y axis.

Good luck, post pics and videos if you get it to work.

edit - probably worth saying, I would consider my warranty void and faults to be my problem if I did that to my machine

A folding table to store the machine would likely be good with the precautions above. The machine was designed to be horizontal. Maybe make a folding table and store it vertical but use it horizontal. Shop space for we mere mortals is always at a premium. If you have a small shop the only answer is to make it bigger or go up. The expansion of a shop may not be practical but going up with some planning is very doable.

About how tall is the machine with the HDZ all the way up and using the stapeoko branded router? I’m looking at the folding setup. Wondering how far the pivot point should be away from the wall to have it fold up.