I like Carbide Create for it’s fast and mostly intuitive usage. Kudo’s for making the program and continuing to support it. I have some requests that would help me out in the projects that I am doing:

For me the first one is the most important and probably easy to implement. Not sure how it was coded and I realize that not many people need such a thing. It’s just when you create a branding iron or something that transfers ink, you have to create it in reverse to transfer properly.

Alternately, set the type in Inkscape, reverse it there and then import to C for CAM?

Thank you WillAdams for helping. I was hoping you could point me to where I could flip objects negatively or convert the text to paths within Carbide Create. I have attached a screen capture of the text portion I was using in my test.

Here is the text portion options along with the projects options (2nd image). 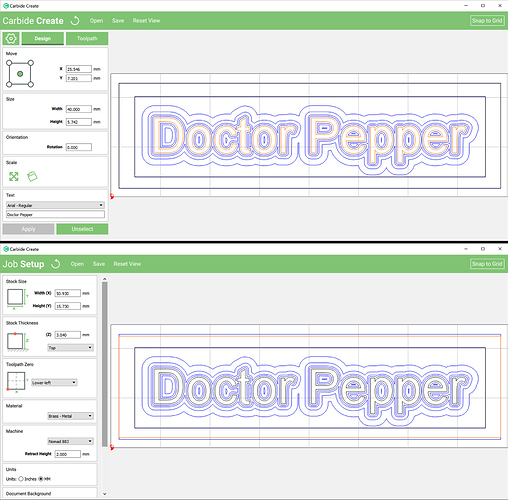 Oh, and here’s a bug in Carbide Create when doing the “Show Simulation”. It shows extra material to the top and right of the entire project. Plus, some of the letters are damaged such as part of the “p” in the double “pp” portion. 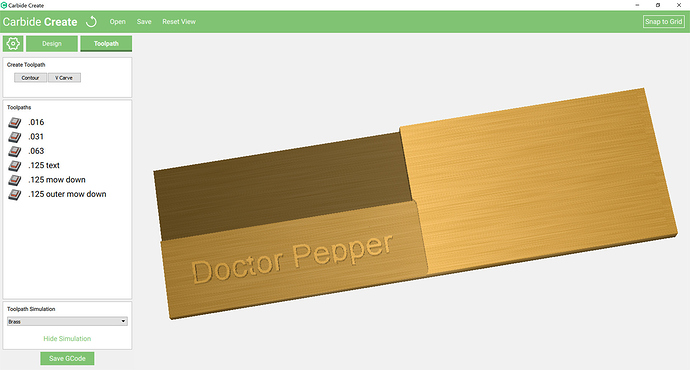 I have had similar problems with the simulation.
About point 2… As I understand they want Carbide Create to be only used by carbide 3D comunity (SO3, nomad) so generated code will only be understood by Carbide Motion. There was I way (I think) to extract pure Gcode from the file using CM (once connected to the machine…) but right now I cant find how.
My biggest request with Carbide Create are TABS!!!

I have to keep using makercam just because of the tabs (which is very tricky/buggy)
TABS please!!

Not sure how to explain my request, but I’ll try. If one of you can boil it down or use CNC terminology all the better.
I need to cut multiple holes of exact same settings multiple times out of the same sheet. 9 holes of 3/4" diameter.

In Carbide Create currently I have to select the first hole, set the tool, set the depth per pass, step over, feedrate, plungerate, max depth and offest direction.

Is there something I’m missing, or could there be a setting that would capture and duplicate all these settings?

It should be possible to select all features w/ equivalent CAM settings and process them all w/ a single dialog.

I agree @dorf_online! And while it is possible @WillAdams by selecting all paths and using one setting, it adds a lot of unnecessary movement (and time), because it moves around to each element for each change of depth, and it also makes it impossible to pull a single element out from that tool path if needed.

I was thinking that something along the lines of grouping/nesting could work well (and could also help clean up the UI a bit if groups were collapsible). Something similar to grouping layers in Photoshop. Basically you could create a series of paths, select the ones you want, and group them into a set. You could then apply the tool settings to the entire set. It would keep all of the paths separate, so you could delete/enable/disable/etc, but still only have to manage the tool settings in one place.

jfo, thank you for understanding my request and adding the part I missed about selecting them all under one tool path. You are correct, the ONLY reason I don’t do that is because of wasted time and movement.

It has the same limitation as MakerCAM then.

There’s a post-processing utility or two which might fix it: 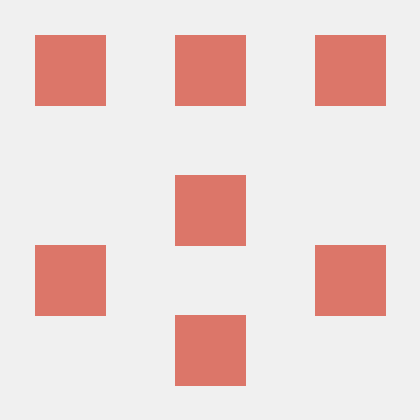 Thanks @WillAdams, will have to check those out. I do still think its a pretty good idea for a feature in CC to avoid a secondary process.

Those are some good feature requests that I would like as well. Some other features that would be nice:

In the JOB SETUP mode:

In the DESIGN mode:

In the TOOLPATH mode:

the proper phrase would be “hear, hear!” — as in “everybody listen!” yet very close to “beer, beer!”

want to +1 this issue. I think a very simple solution would be an single on / off option in the toolpath window that allows you to group cuts by depth or by curve. That way you could cater to both. Default should be group cuts by curve, would eliminate so much extra motion. So in a single toolpath, finish the cut for curve 1 before moving on to curve 2 etc.

TABS WOULD BE AMAZING

When can we expect software upgrades for Carbide Motion and Carbide Create?
Where do you find the release noted for each update?
Does anyone know what could be potentially in the next upgrades?

I think Tabs will be useful, but I am living without them. Never-the-less, it is time consuming to prepare for full cut through. I like the method suggested to me from Tony (if I remember correctly) which involves painter’s tape on the bottom of the workpiece and also the waste board there under. Then Supergluing the the assy together. Has worked well for me but I worry about milling through all that gunk.

How about putting the saved settings into a .xml file rather than in the registry. It would be nice to be able to change them without editing the registry. Also save the most recent directory or at least let us set the directory it goes to when you click the Open menu button.

seems to be many other great suggestions here