So I recently posted another thread about a router bit causing me issues. I believe the issue is that the router bit might be dull. While troubleshooting, I dug deep into the world of feeds and speeds to see if I was being too aggressive. Turns out I was probably running on the low end of an acceptable range. Without having a lot of knowledge on this subject and while getting started, I know that I’ve potentially had the RPMs too high while running Carbide Create suggested feeds and speeds. I know that is my fault, but it seems like that could be a common issue with anyone who is new like me. Maybe CC should be updated to have feeds a little more mid range to allow for a larger cushion for the user to make mistakes (on both ends of the range). I think a lot of people might be dulling bits prematurely because of this. To illustrate my point here is a screenshot of the Nomad #201 bit plugged in to the calculator at custompart.net with the defaults suggested by CC. 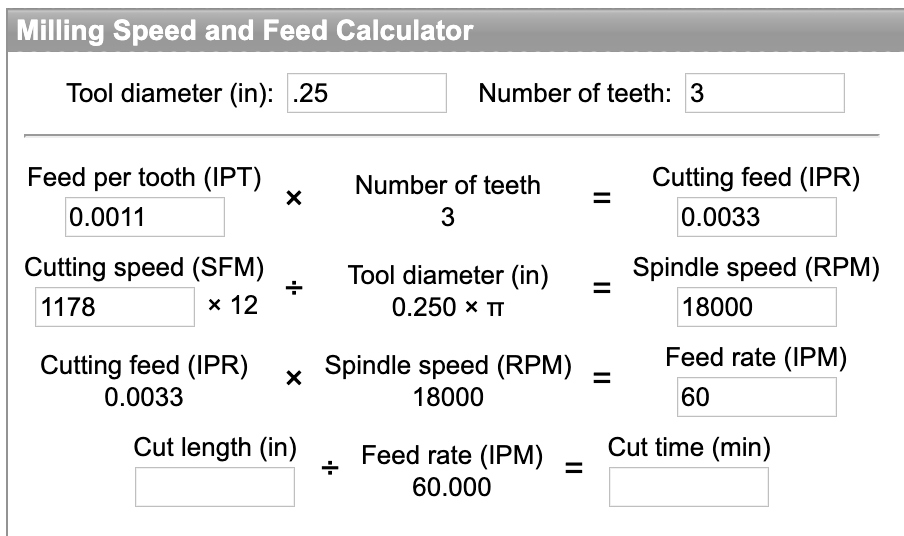 You’ll notice that the feed per tooth is on the very low end of what would help keep that bit nice and sharp. If I bump the router speed up one notch to 24000 RPM, you’ll see it makes the problem much worse. 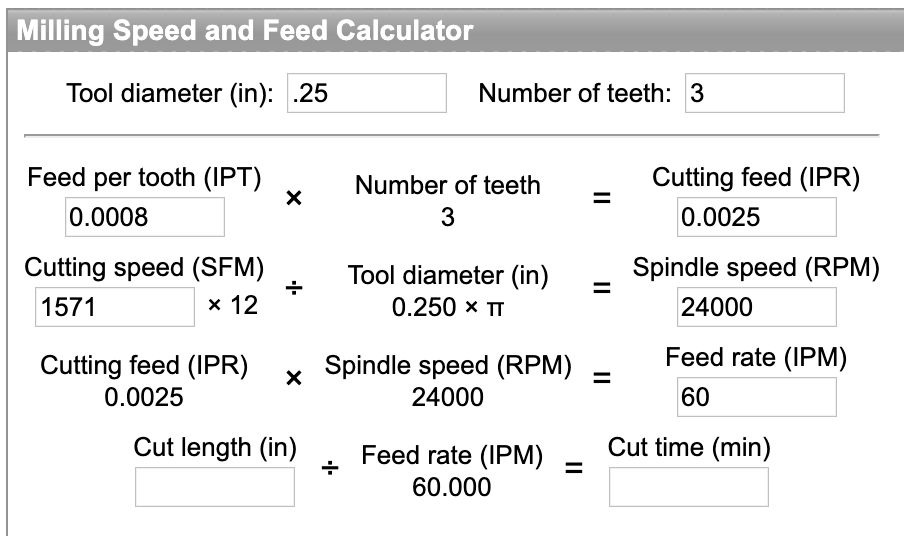 Here you can see the Feed per Tooth is under .001. This is likely getting to the point of making dust instead of shavings and will likely start to heat up the bit and burnish the wood. Especially if the bit is not razor sharp like new or the material is harder like a hard maple.

Maybe CC could be updated with a little more aggressive speeds and feeds. Mostly, I wanted to post this so that newbs like me will maybe not make the mistakes I did and keep their bits sharper for longer.

What do you guys think? Is it a problem? Or am I worrying too much about it?

one of the challenges is (until dynamic F&S is implemented) is that in CC, while 50% cutter engagement is typical, slotting (100%) happens as well and at that engagement, the parameters also need to be in the valid range wrt forces/etc.

one can post-process CC output and equalize this using a tool I’ve been building and then you can crank up the speed quite a bit ( https://fenrus75.github.io/FenrusCNCtools/javascript/gcode2gcode.html )

That’s a great point @fenrus. I forgot about the fact of load changes between slotting or partial cutting. Is this tool capable of “scripting” within the gcode? For example, could I put formulas in the gcode (pre-processed) and then process it passing in parameters like material thickness?

in principle all kinds of other things can be done, just I’d need to understand what it means

Ok. I see. I thought I read of another tool that you could process gcode with embedded “scripting” like math and variables. That way I could generate the main gcode once and then when I run the same job and need to use material that is slightly thicker, I could pass in the thickness and it would re-calculate portions of the gcode.

That would probably be Toolpath Language: https://tplang.org/ or one of the other tools listed at:

doing it only for parts is… a bit more complicated

An 0.001 chipload should be fine for just about all materials.

Next time just bump the feed rate instead of the rpms.

Thanks Will. I’ll take a look at those.

Here you can see the Feed per Tooth is under .001. This is likely getting to the point of making dust instead of shavings and will likely start to heat up the bit and burnish the wood. Especially if the bit is not razor sharp like new or the material is harder like a hard maple.

Do you try to make shavings with your hand held or table mounted routers?

Ha! Funny you ask. I actually do. I usually make really big shavings though cause I’m usually trying to get through the wood fast enough to not burn it. I hate sanding.

What router speeds, feed rates, feed force, WOC, and DOC do you use? How about cross grain?

Not sure I’m following you. You mean while hand routing? (related to your previous comment). Or are you talking about the CNC? The answer to the first is obvious. Dunno. The answer to the second depends on the day and the material. I’ve been experimenting a lot. Last used that was successful for me in hard maple was a .25 dia upcut 3 flute bit, DOC - .125, WOC - .113, 18000 RPM, 80 IPM. I’m using Carbide Create so cross grain is same as with the grain.

I was referring to hand or router table routing. You should know your router speed, WOC, DOC, and grain orientation. I think that your feed force is probably less than a few pounds (comparable to acceptable Shapeoko levels). You feed rates (less than 200 IPM) are likely comparable to that of Shapeokos too. Bit diameter and number of flutes, along with router speed determine feed force requirements.

Ok. That makes sense. What are you suggesting? I’m missing the point. Sorry.

The CNC machine basically does what you would do and has pretty much the same limitations and capabilities. So, your experience can help with how it should be operated.

Gotcha. I think the problem was I never put that much thought into doing it by hand. That’s why my router bits wouldn’t last as long as they probably could have. Now that I’m experiencing issue with dull bits on the CNC (see my other thread about bits working themselves out of the collet), I’m having to put a lot more thought into it. What’s nice, is that knowledge can now translate into how I use the router by hand as well!

Yes, if by chip you mean visible sawdust!