I’m trying to cut a pick guard from acrylic,plastic. This should be a simple thing to do However…

Initially I tried to open/import an existing file from one I had, then from fusion 360.

Your import options are limited and don’t seem to work correctly. Issues from the import not showing at all, either from an original or converted file( you only support 2 formats) . Common problems are lines on the file can not be separated from one another or “ghosts” (lines that are not visible that still affect editing/selection.

As a last resort I imported a bitmap and painstakingly traced the features one by one. After many many hours of this, more ghosts interfere with doing a correct tool path.I have attached 2 of the many many attempts at doing this job that should be simple.

I have seen these ghost lines happen also in your files from cut rocket ( the foot stool) features that have been deleted that still seem to be in effect.
I have the latest version of carbide. HELP

This is caused by the geometry not being connected.

Fixed by exporting as an SVG, fixing in a 3rd party program and making an SVG which when imported is closed.

Could you let me know the third party software and your process to repair? I don’t know how the open geometry occurred. I was very careful, did it several times and could see no breaks in the geometry even under extreme zoom. Is it possible that carbide does create artifacts that don’t show up in the preview? As I mentioned, I found this same problem on Edwards plan for the foot stool on Cut rocket. Thanks so much for your help and getting back to me after hours on a holiday! John 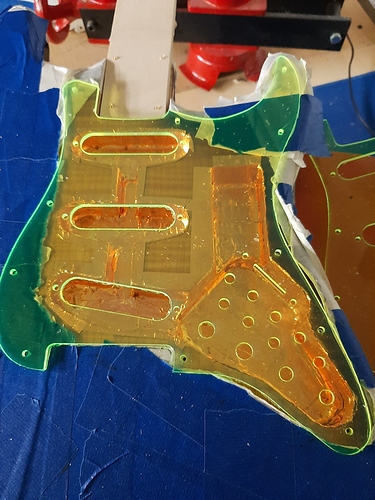 It works fine after your assistance.

I fixed it using Macromedia Freehand and Inkscape — probably just Inkscape would have worked.

As an alternative to Freehand I’d suggest Serifs’ Affinity Designer.

Thanks again, I owe you a 6 pack