So I found some sheet music in SVG format, and it looks ok when viewing in Edge, but when I load into CC, it looks jank. Any ideas? It looks like all the “dots” from the notes are missing. ( I know all the technical terms)
Here is a comparison shot, and below that I will post a zoom in of it in CC. 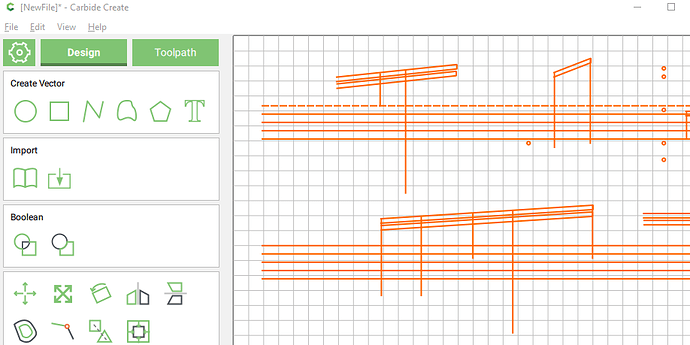 None of this will cut anyway since all of these are lines and not closed paths. The dots on the notes are the least of your worries here. Neat idea, but you’ve got some work ahead of you to get this to cut.

I wrote up what was involved in fixing this sort of thing at:

Found a copy of Amazing Grace (which is in the public domain) here: http://openhymnal.org/Lyrics/Amazing_Grace-New_Britain.html The file when opened in Inkscape needs some clean up — in particular, paths need to be expanded to strokes and so forth — even then, when opened in Carbide Create there are some problems: [image] which requires some manual touching up: [image] and [image] resulting in: [image] Looks as if it may not be able to do everything in Carbide Create — filing featu…

you can in inkscape work on the thing (objects to path, stroke to path etc)

or you can do a pretty evil but well working hack: Export the SVG as a very very high resolution bitmap.

and then trace that bitmap (inkscape or CC) back to vectors.

That sheet music is … well, somewhat odd to the point of being wrong. It’s range is way outside a bass clef, and it has treble clef markers inline. I’d be wary of giving this to a musician if that is your intention.

What everyone said is true. However you could import into CC and select one line at a time and try to the join vector. In my example you see the sideways U is magenta and the straight line is red. The Magenta means an open vector. So select a whole line and try the join vector before going off on a more extensive try. If it works cool if it does not then follow what the others have said.

So select all the objects and the box with the Edit the one on the right is “Join Vector”.

The bit of music looks worse now I can see it on a device other than my phone.

But, I guess it show’s how great and truly helpful this forum is!

It’s as if you said:

I found this SVG of a romantic 19th century poem and it doesn’t work in CC:

and everybody helps you get it to cut

I suspect it is some sort of international military secret embedded in psuedo-musical notation.

If you will post the source file/link I’d be glad to try to fix it.

I found the source for that sheet music here. At your own risk, of course.