I never had a problem, not the F310 sometimes works but mostly not.

When it works, it is not intermittent, it works. Something causes it to stop controlling the motors.

Using a logitech ap on Windows 10, I can see all the F310 buttons and joystick work.

Is there something I have to do?

It should just work — do you see the “Game Controller Enabled” message at the bottom?

At the bottom of the application window.

No,I followed the steps but controller has no functionality.

In the past several days, it was working.
Then and now, not at all.

But there was also a partial state where just the z-/+ worked.

I ordered another controller. - due Thursday - although the Gamepad tester indicates the F310 is working.

I’ve been having the same issue with my F310 controller. Occasionally (VERY occasionally) it works, most times I get nothing. In the Logitech app it shows all the button presses, but in Carbide Motion there’s nothing. I’ve rebooted several times, unplugged and plugged in the controller several times, all to no avail. I don’t know if it’s my Windows setup or the controller, but it’s frustrating. When it does work, it’s great though!

Does that not work reliably? If not, let us know at support@carbide3d.com 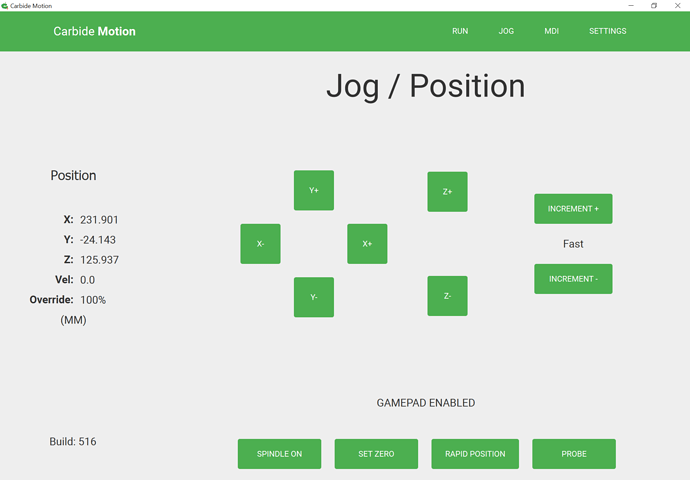