I recently downloaded CC461 and wanted to look at the formatting of the .nc file using inch format. While “dry running” it I noticed that after the tool change it moved in rapid to a Z coordinate and fed to its first X/Y location (that’s not good). On inspection of the code the “preposition” X/Y coordinates are missing. I am new to this, did I overlook something simple?

which postprocessor did you select ?
(it’s in the Edit menu)

I have selected the Carbide 3D Shapeoko post-processor.

As far as I can tell (regenerating both the mm and inch version of your project), there is no influence of the units on the generated code (just the values, obviously)? 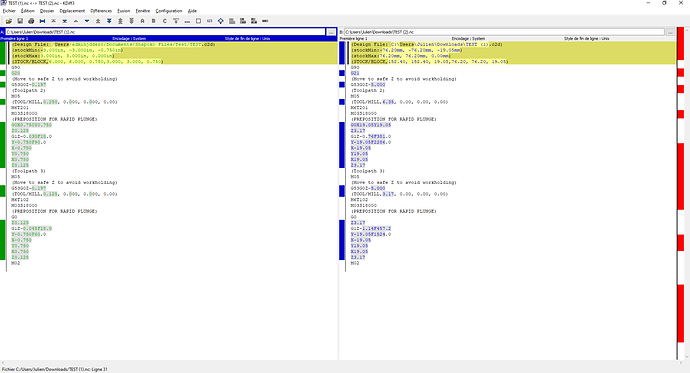 There are indeed no X/Y repositioning at the beginning of the second toolpath, but they would have been G0Y0.750X0.750, and the last X/Y commands that happened to be executed by the first toolpath were

so…it does not change anything ?

I guess the final retract to top Z height (minus mm) is hardcoded behavior in CM, probaby triggered by M02 (end of program) indeed.

I don’t know how often in the “real world” this would actually happen, but not a good “feature”.