I’ve been refining a design file and testing with a spring loaded diamond engraving bit in a new Nomad 3.

It’s been going well until yesterday when the Nomad started engraving out of the usual order.

The file has thirty something text characters drawn in cad. Not a font, just very small geometry.

On the next iteration of the file Nomad skipped the first 4 characters.

On the next after that 9 characters were skipped.
In neither case did it come back and engrave the missing characters.

Just tried again and Nomad jumped ahead to about 8 characters from the opposite end.
I stopped it so don’t know if it would continue to engrave the skipped end.

The G-code files that were successfully engraved had 0ver 9200 lines of code.
Since the trouble started CM says the G-code files are only around 7000 lines.

I’m a beginner so I must be doing something wrong but what?

Last week Will helped me by sending a fixed version of my CC file and I just ran the G-code from Will’s file in the Nomad and it performed properly, so somehow I’m screwing up my file.

I made the modifications in cad and export an .svg, the same way as usual.

In CC I open the .svg and scale and position then choose the tool and set the Toolpath as usual.

The only thing different is that in CC I’ve also been rotating the geometry to the proper orientation because I forgot to do that in cad. 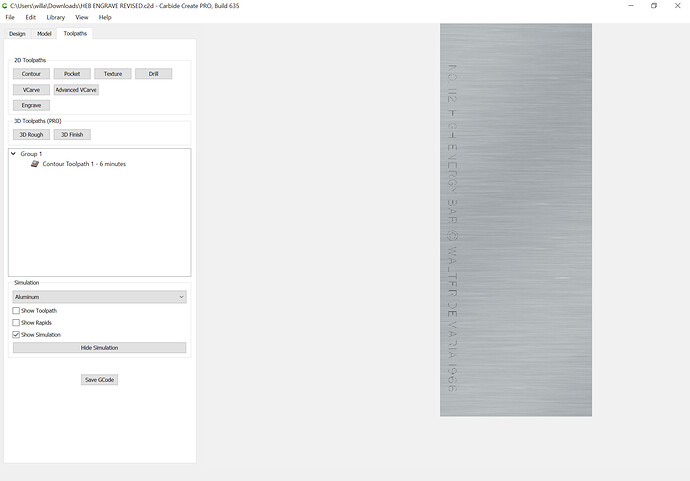 and the G-Code matches: 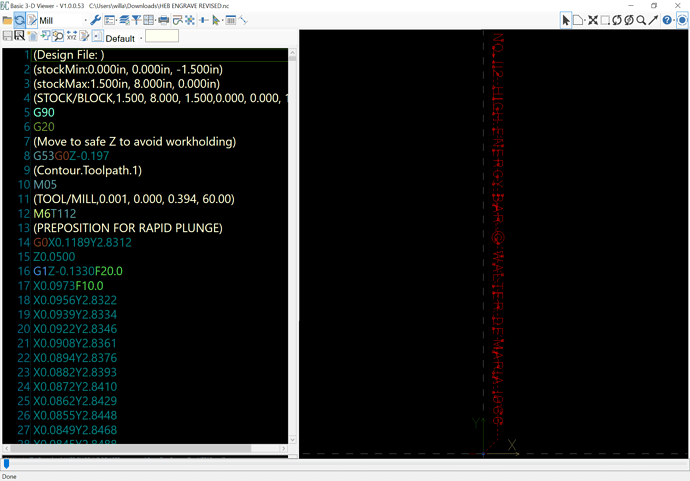 How do I trouble shoot the fact that Nomad skips ahead?

Please write in to support@carbide3d.com and we will do our best to assist.

Try changing your step over from .118 to something like .008

I let it run despite the odd order, jumping around from one group of lines of code to another, and it did complete the job.

I’m wondering if the rotations I made in CC had some effect.

I’ll go back to cad and get the file in the right orientation before export and try again.

Exported the file in the final orientation from cad and processed it through Nomad.

Engraved in this order,

Looks good but it seems weird to me. Is the odd order anything to worry about?

Toolpath ordering is a complex computer science problem known as “The Traveling Salesman” — it’s not possible to have an algorithm for this which runs quickly and arrives at an optimal solution for all instances.

So, not a problem, just a solution?

The G-code files that were successfully engraved had 0ver 9200 lines of code.
Since the trouble started CM says the G-code files are only around 7000 lines.

Harking back to previous issues - did you save the file and load it into CM, or “Send to CM” using that sort of magic? I think in the past that ended up with truncated gcode being loaded by CM.

If you have a file where the toolpath ordering is esp. egregious, send it in to support@carbide3d.com and we’ll do our best to look into it.

I saved file as .svg in cad then opened from inside CM. (edit, not CM, CC)

I think the difference in the number of lines of code was because the earlier file had a character that still had extraneous lines from converting to a polygon in cad. Since removing those extra lines the G-code has pretty consistently been around 7100 lines.

As a beginner I don’t know what’s weird and what isn’t.

The first several runs testing to get the pressure right proceeded from the end closest to the end of the workpiece and ran all the way to the opposite end in sequence. That seemed perfectly logical.

After the pressure was right I started adjusting the spacing of characters and the sequence changed. It wigged me out a bit and I stopped the program. Letting it run (in whatever order) results in a complete engraving, so far.

If the odd order isn’t an indication of something being amiss I’d rather just move on.

The question was relating to how you got the file from Carbide Create into Carbide Motion. There are two ways and one has been known, in the past, to truncate files.

I missed that M.

Save G-code in CC

Still seeing an odd order of operation (from my point of view) but it’s completing the job and the order is indicated in the rapids simulation.

Happy it all works for you.

It jumps around to different parts of the stock material just to ensure those areas don’t feel lonely and left out when a different area is getting all of the attention.