American here… I have one 110v circuit and one 220v circuit at my Shapeoko. Currently I only use the 110v to run everything. I have the XXL with an HDZ and have been using the iOT relay to control my router and shop vac based on 5v signal from the Shapeoko control board.

I’m brainstorming and buying parts for a spindle upgrade and I want to use a 220v 2.2kw water cooled spindle. Thinking 4 bearing HY spindle and 2.2kw HY VFD. I want to use a CW-3000 for water circulation to the spindle. In the past I’ve heard of people electrically interconnecting their VFD and CW-3000 so that one never runs without the other.

Does anyone have specific wiring guidance on how to accomplish this? Should I buy the 110v or 220v CW-3000?

Two ideas I’ve thought of is 1) cut the plug off of the CW-3000 (220v) wire and double it up on the 220v line-voltage-in terminals on the VFD, essentially daisy chaining it off of the VFD. Or 2) get the 110v CW-3000 and install it on an iOT relay which will power up the CW-3000 every time the 5v signal is sent to the VFD for spindle control. This (option 2) is probably the safest electrical solution, but would mean that the CW-3000 would be cycled on and off every time the spindle is turned on and off.

Open to any ideas, diagrams, or pictures y’all have. Thanks!

The HY VFD has ‘multi output’ connections that allow it to signal status of the drive but given the very small power of the circulation pump and the preference to keep water flow running after cutting to avoid heat soak in the spindle I’d suggest just enabling the circulation pump whenever the VFD has power.

I have a small switch box which allows me to power up the Shapeoko and some other small accessories separately from the VFD and coolant pumps, both are killed by the EPO.

Here’s a relevant bit of the HY manual showing the ‘multi output’ pins but, I don’t think it’s worth fighting with, the RS-485 certainly isn’t as it’s not real RS-485; 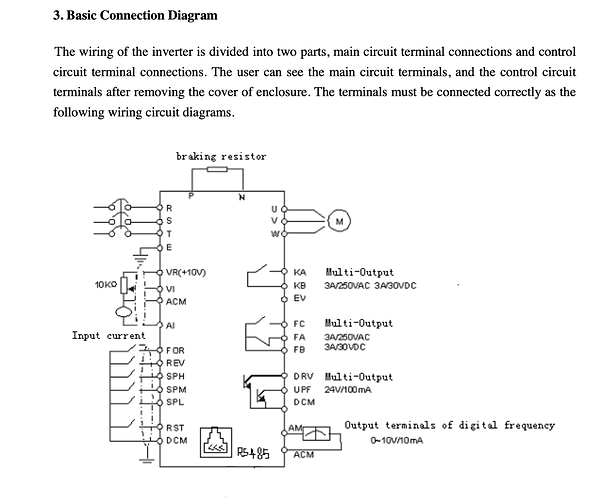 With the option to purchase a 220v CW-3000, what if I cut the end of the supplied power cord and wired it into the RST lugs of the VFD? That way, whenever the VFD has power supplied, the CW-3000 does as well, both receiving 220v.

I’d like to avoid building a relay of some kind as I don’t really know much about it and worry about the necessity to add heat sinks and what not.

Do you have a switch that turns on voltage to your VFD? Such as if I installed a switch on the 220v outlet that my VFD plugs into, could I turn it on and off for every session and not also have to press buttons on the VFD (power?) prior to cutting? In that sense, I could flip the 220v switch on the wall, energizing the outlet, which would then energize the VFD, which through the RST terminals also energizes the CW-3000. Is that sequence enough for me to press “start” in Carbide Motion, or would the VFD be in a powered off state still?

Wiring in the VFD has a few hurdles you’ll need to deal with, depending on the level of integration you want. There’s also the setting up of the VFD which may not be already done for you before shipping, I would check it anyway. If you power it up with the wrong config you can cook the VFD and / or the spindle.

I use my VFD spindle in a manual start / stop and speed setting via the knob on the front panel, that’s fine for me, lets me override the spindle speed as well as feed speed during a job if I want to and gives me some confidence the thing won’t be automatically started whilst I’m changing bits. I understand that others like a little more automation.
I also use an edge finder in the spindle so that I can zero on something other than the bottom left corner, that requires manually setting the VFD speed to about 1,200 RPM which would be tricky if Carbide Motion was controlling it via the 0-10V input.

By default the HY VFD has Start and Stop buttons which you’ll need to use, when it powers up it thinks for a bit then goes into “Stop” mode, you press “Start” and turn the knob to indicate a speed in RPM on the display. It does not auto start and run when power is applied (that would be somewhat dangerous).

It is possible to wire up your VFD to the Shapeoko controller so that the controller can automatically start and stop your VFD (once it is powered and ready) and set the spindle speed. Whether this is desirable is a question for the individual user. There’s various descriptions on this forum and Wiki for how to do that wiring but I suggest you get the basics working first.

It is common for people to encounter issues once they have a VFD installed due to the substantial electromagnetic noise generated by the VFD, particularly the HY VFD which has no input noise filter at all.

In my experience, an input noise filter and a shielded cable for power from the VFD to the spindle are basic minimum precautions, they cost very little and can save a huge amount of trouble later on.

If you have to find somewhere to wire in the noise filter, you may as well have a little junction box which the power comes into and supplies the cord to the VFD and a socket for your CW-3000.

There are lots of power tool Start / Stop / Emergency Stop switches on Amazon and eBay which are pre-wired and have sockets to plug into which would avoid some wiring, but you’d still need to find somewhere for the input power filter for the VFD. This would provide a single power on / off for the VFD and coolant pump.

If you don’t understand much about wiring then a plug-in power filter or extension cord with power filter would be an alternative input power filter.

Well there are quite a few examples of Shapeoko E-Stops on the web, but I think that are most wrong, or very vague. What you want is something shuts off BOTH the Router and the movement of the Shapeoko.

PS Trust me that you will NOT be able to find that little red on/off switch on the power switch when Oh Shit happens, and Oh Shit WILL happen.

Turn on the system and test. 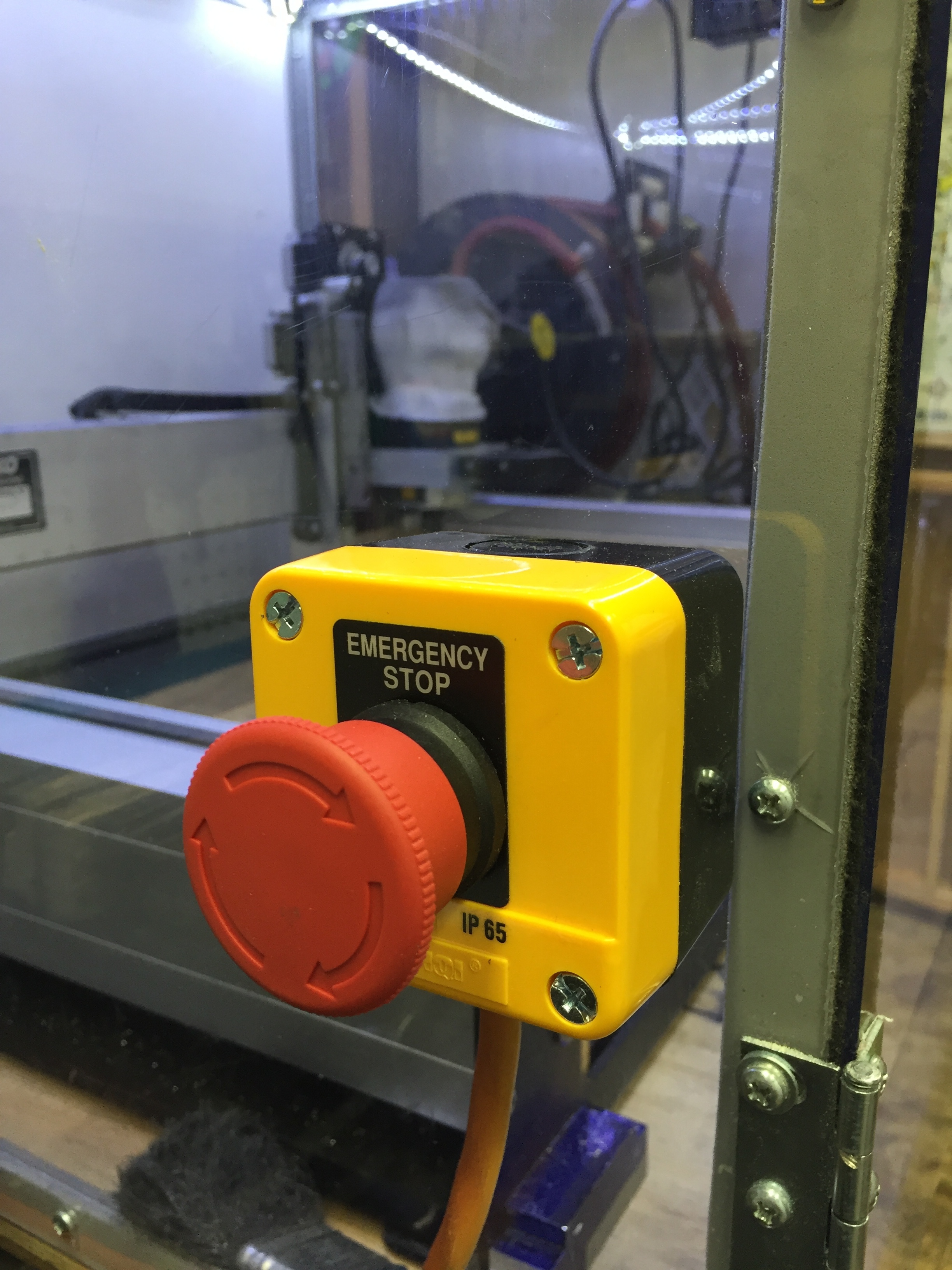 I just made the jump to a water cooled HF spindle. I took the time to wire up an E-Stop to a power strip like @RichCournoyer instructed. Granted, I went with a 110V 1.5kw spindle/VFD (it’s not too late for you haha), I have the VFD, fish tank pump, and SO3 currently plugged into the power strip, so when I release the E-stop, the VFD and pump turn on then I can hit the switch for the SO3.

It’s worth noting that this method does not provide any electrical safety on a 220V circuit and worse, presents an apparently “off” circuit which still has one of it’s two legs live. If an electrician did this in the EU they’d be prosecuted.

It might be OK on a correctly wired 110V outlet (and 110V is somewhat less dangerous anyway) but given the electrical fault modes than can occur on the VFD and the twin live nature of 220V supply in the US I would buy an actual 220V EPO switch that complies with electrical safety regulation.

Everyone has their own risk threshold however.

You are going to want a switch to turn power on and off to the vfd. Just run an outlet to the cw3000 or hardwire it, on the switches side of the circuit. You can make the connection inside the switch box, or you can do it on the terminals for the vfd input. You’ll need to match the voltages of the chiller and the vfd input to do this.

You want to be able to run your chiller without the spindle running. Helps to keep it cool. After some long hard runs I’ll let it run for an hour to cool off. The vfd is powered up with the fan running because of how I power the chiller but the spindle isn’t running. I’ll get around a 4 degree Celsius coolant temp rise on some of my projects when doing the roughing passes.

I took it one step further and I put a relay in to control the 2 hots for the 220v circuit and the hot for the 110v power supply to the shapeoko. It’s a 3 pole relay do each hot is controlled by a pole. I use a magnetic switch for a router table to supplied command power to the relay. This acts as my on and off / emergency Off switch for the whole setup. I turn one switch on and my vfd, cnc, chiller all have power. If I have a power outrage the magnetic switch disengages from the on position automatically so when power returns it stays off even if I didn’t hit the off button.

My spindle on off and speed are controlled via g code and the shapeoko control board. I prefer not to control the vac automatically as there are slot of things I can’t or don’t use it for, it has its own switch on the side of the enclosure.

Also I ran everything on the side of my enclosure with Romex and metal boxes. Everything that came with a plug can be unplugged and taken off the enclosure if needed this way. Although the cw3000 comes with a non standard 220 plug for the us so I replaced the end on the cable to be what I needed.

Wow, thanks for the information. I like that setup idea, especially the input electrical with the 3 pole relay. I’m familiar with electrical hookups, but always weary about specs when picking out components like that. Any chance you have a link to a suitable relay, or the one you specifically used?

Is what I used.

Just as a devils advocate note.

Some people are against using a relay to shut everything down as an emergency stop. Their thinking is that the relay can stick on and cause bigger issues.

For my I have a 50 amp plug and or a breaker box 3 feet away if all else fails.

Sorry, just now seeing this. That link doesn’t work. Could you try posting a different one for that item? Thanks!

That should work better