Hello,
Has anyone one had any luck designing cribbage board holes in Carbide Create V7. I can create the holes in 2,3 or four lines but cannot figure out a way to get them to curve along random lines.
Am trying to create a unique design. I did see the post where a cribbage board was designed in Inkscape but want to try and do it in Carbide Create.
Thank You
Garry

Carbide Create doesn’t have a feature for placing features along an arbitrary path — you can place elements linearly or along an arc, but that would get tedious for anything which didn’t involve straight lines or arcs of a circle.

If you find yourself bumping into limitations of Carbide Create, you’ll probably want to consider a 3rd party drawing tool — Inkscape is quite good, esp. for being free — the usual commercial program choice is Serif’s Affinity Designer.

Hello William,
Thanks for the reply. Was looking at Inscape but didn’t know about Seriff’s Affinity Designer. Will look at that.
Garry

Do you have a specific “random curve” in mind? There’s a chance it’s not as random as you might think.
Can you post an example of the curve?

Since the holes are usually in groups of 5, what about creating a couple different groups of 5 using the array tools, then placing them along your curve? 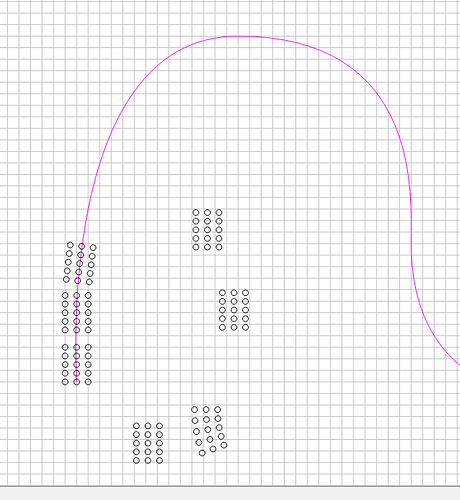