I’m thinking I’ll regret selecting this basswood for my 3D carving of a Robin. This stuff leaves all sorts of curly fibres throughout the carving. However it does seem to clean up with some sanding but sacrificing some detail.

Anyone know if it’ll clean up and accept some finer detail by running a finishing pass to remove the remaining 0.5mm using a tappered ball mill with 1mm diameter tip and a 0.33mm step over?

I use basewood at times since it cuts like butter.

what I’ve found is that for 3D carving, I get pretty good results if I use a non-ballnose downcut cutter!

for example I use https://smile.amazon.com/gp/product/B076BL1GFD/

ballnoses on basswood will indeed string like there’s no tomorow

I was afraid of that. I’m down to the wire and this was going to be something I added to my project for the Community Challenge and there’s no way a tool will arrive in time to finish the project so… From your experience with basswood do the fibres pull up more no matter the direction the toolpath runs or is it better running against the grain/fibres? For example in Fusion 360 I can run a parallel toolpath and with the degrees for the toolpath can make it run in a certain direction with a final pass perpendicular to it. So perhaps the first pass of the parallel toolpath would go with the fibres (beak to tail) and even if it lifts some fibres the final direction which is perpendicular will remove little extra material and maybe clean it up somewhat as I would not be going any deeper into the material.

Interested in your thoughts as I’ll run the finishing passes with what I have at hand and if it’s a fail I’ll get the proper tool and rerun the project in a second piece I have in hand.

iirc it’s better to run against the grain than it is to run with it.

do you have any flat end mills? You can use any flat endmill as a cleanup pass at the end I suspect.
The smaller the better of course, so probably a 1/4" is a bit rough for this

I do have a variety of flat endmills but nothing small enough to get the detail in the carving that is also long enough to clear the frame around the bird to hold it in place while cutting and act as my references to re-zero as I flip it to come from another direction (ie. 4 sided machining on this piece - top, bottom, left, right). The issues with the tools I have is that they are too short and the nut on the router for the collet will crash into the frame (full disclosure has crashed… so I now added the nut as a holder in Fusion 360 to inspect clearances with the simulation to detect potential crashes).

Basically this being my first 3D carving I was thinking ball nose tool would be the best way to finish not even thinking this would happen so definitely a lesson learned through experience :). For finishing I ordered this which is arriving today. 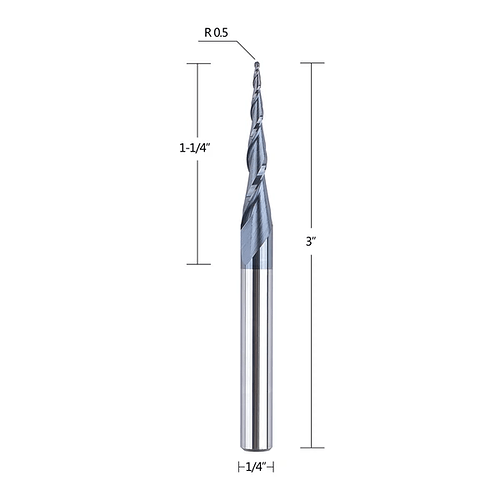 Appreciate the feedback but limited options on tools at this point so I think I’ll just have to take a run at it with what I have so debating between these options using Fusion 360 parallel toolpath:

EDIT: The reason I’m looking at the parallel toolpath is because the perpendicular pass does not appear to go any deeper then the 1st one. So if fibres curl up on the first I’m hoping that on the second pass it’ll clean things up as I’m basically only removing the peaks created by the sides of the ball nose between each pass.

When I get the furries I have some decent success brushing them upright with my fingers and then trimming them off with a very sharp marking knife (kiridashi) with a single edge grind which allows me to run along the surface without cutting in if I am careful. That means less sanding and less loss of definition at sharp corners.

There will be limits to what you can do on that complex 3D shape though.

Looks like it’s cleaning up pretty good with the parallel toolpath in Fusion 360 and the tapered bull nose bit.