I have been wanting to try my own version of the Heng lamp for a while, here’s my current MDF prototype. 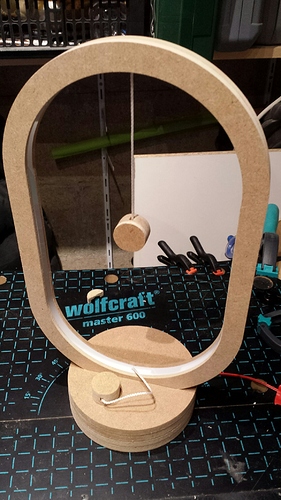 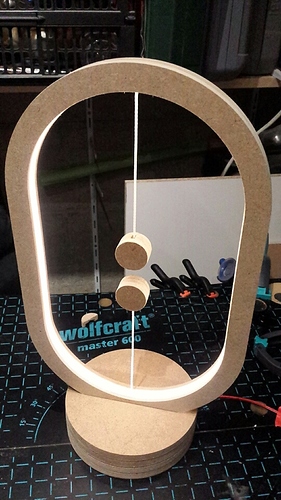 The “switch” floating in the air is such a cool idea, I wish I thought of this myself. Hopefully since I did everything from scratch in CC and as I am (obviously) not selling this, I will not infuriate the copyright gods…

Brilliant Julien even if you did ‘borrow’ the idea.

Do you have a microswitch mounted in the base?

Yes, microswitch in the base.

What is the LED strip you have used, it seems to have a bezel over the strip as I can’t see the individual LED’s.

The LED strip is a 5630 type, 60 LEDs/m
But what is visible in the picture is a translucent plastic strip added on top, about 1/4" above the LEDs, which diffuses the light and makes the individual dots disappear into a uniform strip of light.

Thanks Julien. I guess that would have been evident if I had taken the time to look at the .cd2 file. Excellent thanks again.

Love the lamp and want to try one myself. Were you able to buy the plastic diffuser strip or did you cut it yourself? I’m not sure I could cut a thin plastic strip that accurately.
Thanks
David