Ok, I’ve been trying to cut out some aluminum for clamps. One of the members had posted a vcarve file that I’m trying to use. I did change to a .125 inch thick material
yeah, it is a bit thin for heavy duty clamps. I know, and was as much a test of the machine’s ability to cut aluminum successfully with me setting it up.
So, the sheet is flat, has some paint on both sides, but that isn’t an issue. Got the 1/8" coated bit installed and it actually cut really well. Up to a point. .125 thickness, through holes and slot along with outer cut. Machine cut great to .080 but then isn’t stepping down and cutting through. I adjusted thickness to .135, .140. .165 and .180 and machine cuts air and doesn’t go any deeper.
Reset Z with both paper and with my probe, (yes on top of the sheet, z only) and even rechecked at least 3 times with paper after probing. z is measuring zero on top of sheet.
I’ve seen it appear to step up a couple of times when cutting air and then isn’t on top of sheet at next hole. Got me bumfuzzled. Is there an issue with vcarve files being read by CM?
I’ve had a few other issues on wood not cutting through, but I really thought I had clamp bolts bottoming out and causing issue. I’m beginning to wonder… but those were CC files, not vcarve.
Help?

Oh, belts are tight, (I rechecked again, nothing skipping) Bit is tight, it hasn’t slipped. And It isn’t hitting anything but air any more…

How did you change the material thickness? If you changed it in VCarve, did you make sure the depth of the cut still goes to the bottom of the material in the toolpath setup?

I actually got the error of going too deep a couple of times and accepted the message and it still didn’t cut any deeper. I just read about changing another z setting and I’ve done that and will try cutting it in the morning. I cut off and restarted the machine twice and restarted both computer and cm a couiple of times. Changed the name of the file each time I changed a setting. Seemed like it is just skipping steps. I’m not moving fast anywhere.

I had a similar issue and found I was at the extreme Z- limit. I either lowered the router or used a longer cutter to complete the job. Probably not your problem, but I’d check it out.

dewalt router. It is down to the plastic won’t go lower, and over a half inch of cutter exposed

Are you able to jog the cutter down to the waste board?

I have to ask since I am guilty of something similar. When you adjusted the material thickness in vcarve I presume you updated the tool paths with the new thickness depths right? (I see you got pop up message for going to deep) but then did you re-export and save the new updated changes to the gcode file, AND made sure to use the newly created files with CM? Last time I did something like this I blamed it on the beer

Yep. Process was going well, file has 3 paths I used. It did first pass correctly, (not a cut but a recess and It measures correct depth)
It then went to cut holes, and only went .080 of .125 depth. I stopped and reset Z to insure that I hadn’t made a mistake. Cut air. I then went into vcarve, and yes, recalculated and saved as different file name MULTIPLE times. I did several changes, depth of cut, thickness of material and depth of cut but all just cut air. I cut off everything and tried the last time and no change. I’m going out to play with it in a bit. Maybe I missed something…

Ok, I violated the FIRST tenant in all engineering. Insure ANY physical change you make to your machine doesn’t impact any of it’s operations.

Nothing at all wrong with the programming. It is ALL the addition of a dust boot. Used one I 3d printed and while it works well, the screws that were used are too thick. Guess what hits them about 45 thousandths above my waste board? (I would have seen earlier, if they were higher. )

First pass today, I heard a thunk. Ok, reset and did again while watching from the side. OH CRAP! Thunk…
Yeah, I removed and all is fine. Will get some thin screws…
BEWARE if you use those lower holes…

I ended up tossing the sheet in the corner. Thought it was 6061 or close, but gummed up with every setting.
Found a piece in back pile that was way smaller but .250 and 6061. Had a couple of holes in it, used one to hold down along with a clamp and mdf rail.
Worked well, but I think I’m getting flex in base or the z is not quite rigid enough. About 5 to 10 thousandths from cutting through. Decent cuts, I’m happy with how it turned out for first try. A couple of pictures, oh, I thought my bolt was out of the way. Carbide coated 274 bit went right through it without issue. Not hard, plain head, but steel nether the less… 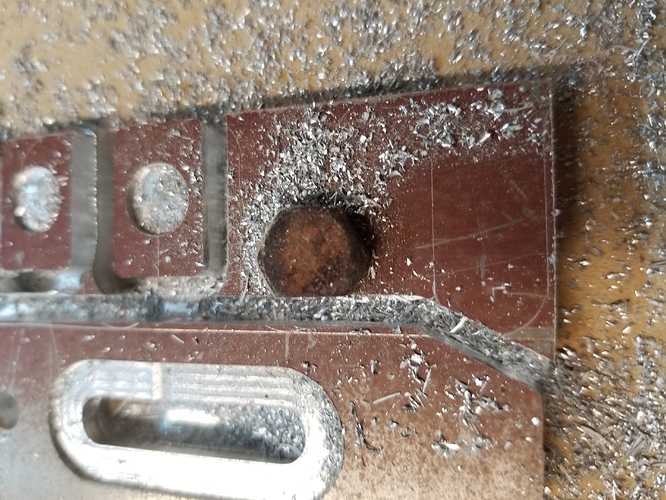 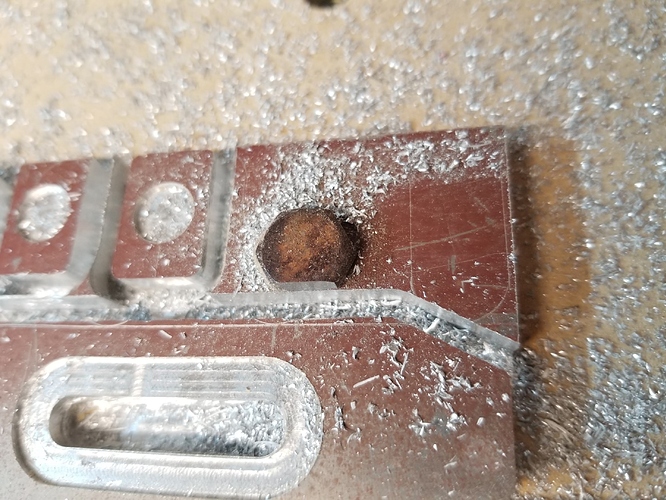 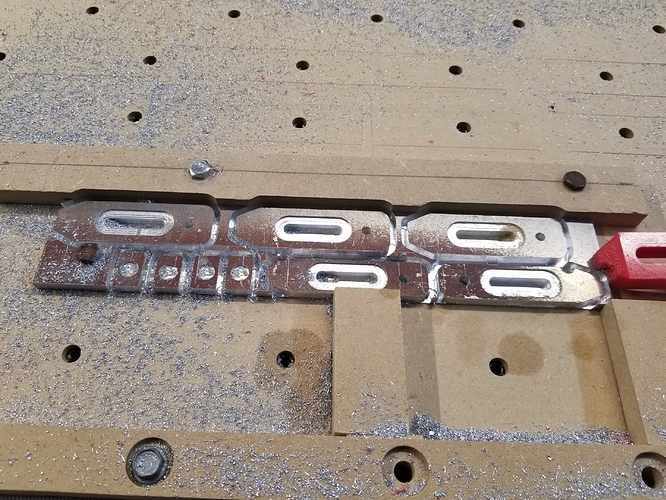